Remote and In-Person, It's All Embodied Church! 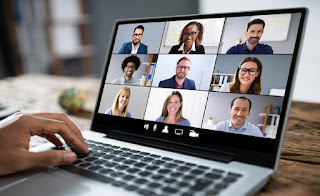 Today, an Op-Ed in the New York Times, written by a priest in the Anglican Church of North America, the Rev. Tish Harrison Warren, put forward the thesis "that the time has come to shut off hybrid and remote worship and to encourage people to come back into physical churches for worship."

At the parish where I am priest in charge, we follow a hybrid approach. About 40-50 of us gather in person on Sunday, and others take part via Facebook Live and YouTube, with the numbers of views hovering around 65 to 100 every week. It's small potatoes, yeah, but it is now at the heart of how this community functions.

My experience as a Christian communicator, parish priest, and hospital chaplain informs my belief that this technological shift is not only long overdue but is consistent with the practice and ministry of the Church since the beginning of the Christian era. Furthermore, just as we cannot dispense with books, musical instruments, or writing, we cannot simply dispense with technology simply because it has limits, temptations, distractions, or challenges. Tech changes Christian community... and gives us tools to communicate the Gospel! This isn't to say it's either automatic or easy.

Personally, I don't think we can put this genie back in the bottle. Even if the pandemic should magically end tomorrow, we have been habituated to a new way of interacting that is here to stay. We must find ways to embody Christian community and communicate the Gospel in the ways the culture understands.

In light of that, I am posting here the letter that I wrote to Pastor Harrison Warren in response to her piece (which is exists behind the NYT paywall) that I forwarded through the portal at the NYTimes website where her essay appeared. Since comments were not open on the column itself, I chose to write her through that portal. I await her reply.

(An earlier version of what follows also appeared in the Facebook site of "The Episcopal Café," where I was a once a regular columnist and an editor.) 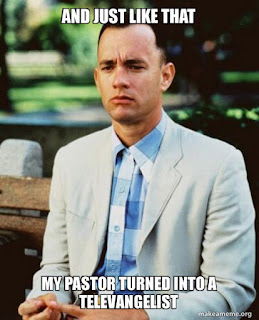 I read with interest your Op-Ed Column in today's New York Times. I am sure that by now you have received many bouquets and brickbats from those in and out of the wider Anglican world about what you wrote. I appreciate the vulnerability of putting oneself "out there" whether it's in the pulpit or in the newspaper to both proclaim the Gospel and to reflect on theology in public spaces.
I am sad to say that, as an Episcopal priest with nearly forty years experience-- with almost fifteen of those years as a clinical chaplain in both secular and Catholic healthcare settings as a Board Certified Chaplain, also have served congregations, large and small, rural, suburban, and urban, and who is now serving as priest in charge of a small south Florida congregation-- that I found your column today to be both wrong-headed and unhelpful.
While I do appreciate the ideal that the best worship is found in community, and that it is essential for communities of Jesus' modern disciples to encounter Christ in worship among crying babies, the stranger, the homeless, the poor, and so on, in what may appear to us as random encounters, this does not mean that we should shut off the tools of remote worship now that we are passing through this phase of the Covid-19 pandemic.
In an ideal world, I believe, as you do, that all of God's people should, whenever possible, physically gather in one space at the same time, certainly on the Lord's Day around the Eucharistic table. Such a hope is at the heart of the doctrine of the Christian Hope: that we will all gather at the Throne of the Lamb in eternal praise, basking in the glory of God! Our Eucharistic theology reminds us that every Eucharistic gathering points us to both mystical bonds we share in Christ and to the promise that we will all one day gather at the banquet feast of the Lamb. So to me, to write off all those who still might need to worship remotely... even the homebound and shut in!.. is to me beyond shocking! It is callous and belittling.
Way before this pandemic, during my time in hospital ministry (particularly when I was a chaplain in a Roman Catholic hospital), we broadcast the Mass on closed-circuit television to patients throughout our hospital. On days when we could not hold Mass in our own chapel, we would broadcast the daily Mass from one of the Catholic cable networks. In both instances, broadcasts were followed as soon as possible by the rounds made by deacons or, more typically, lay eucharistic ministers. If LEM's, deacons, or staff chaplains could not see every patient who might have wanted communion, or if the patient was unable to receive, we understood that the grace of the Sacrament was still present and available to the faithful (as the rubrics of our own 1979 BCP clearly state).
I understand that you might say that is totally different from a "Zoom Mass," a service on Facebook Live, YouTube, or whatever, except that you wrote in your column:

Our worship is centered not on simply thinking about certain ideas, but on eating and drinking bread and wine during communion.

“Christians need to hear the babies crying in church. They need to see the reddened eyes of a friend across the aisle,” Collin Hansen wrote in his Times essay about online church. “They need to chat with the recovering drug addict who shows up early but still sits in the back row. They need to taste the bread and wine. They need to feel the choir crescendo toward the assurance of hope in what our senses can’t yet perceive.”

I find the sentimentality at the heart of this both understandable and unhelpful. I understand the desire--and the call-- to gather with all God's people and especially with those who are at the edges of society or who, because of their illnesses, find themselves disconnected from Christian community. The 1979 Book of Common Prayer groups the various kinds of rites of reconciliation (Ministry to the Sick, Confession, and so on) together for just this reason. But to extend from that the technology behind remote worship is in and of itself harmful to Christian community is a logical leap that cannot be sustained.
One might as well as say that the Apostle Paul should never have depended on epistles delivered by couriers via Roman ships and Roman Roads, or that Henry VIII's 1539 decree that the Great Bible be left open and available in every English parish church somehow separated people from the word of God because there was no one there to interpret it. In fact, we know from history that this those letters and roads were a blessing to the work of the Apostle and the early church. We know that those open Bibles were a hallmark of the English Reformation and that many people were blessed precisely through that widely distributed technology that allowed ordinary people to be able to read or hear the Word of God delivered in the plain language of the people.
All through the Church's history, the Church has experimented with the technologies of their age in the service of the Gospel, from the Roman road, to the printing press, to radio and television, to the internet.
My experience of evangelicals has been that they as a group are generally more open to technological innovation and experimentation. So I wonder if something else might be at work in your narrow understanding of "embodiment?"
At the same time, I worry that hidden not-so-deeply in your column is a kind of judgmentalism and perfectionism that weakens your pastoral theology, not to mention showing off a kind of weak, tepid, ecclesiology... as if somehow the Body of Christ and the Action of the Holy Spirit might somehow not stand up to the rigors of Zoom!  At any rate, I am concerned that it reveals a kind of cruel perfectionism, of a theology of Church that depends only on the gathering of like minded (and physically able) persons in the same local space...which might certainly seem to limit the action of God!... and in so doing manages to write off centuries of Christian pastoral theology, practice, and tradition in the service one small facet of a greater ideal that somehow the only valid worship is worship where people can interact in the same physical space.
I understand that in a consumer culture, where convenience is king, the kind of solitary encounters with a screen is a poor (but very tempting!) substitute for an embodied and sacramental community. But in the case of my little congregation, we have found that the hybrid nature of in-person and remote worship has by every metric drawn us closer together precisely when the pandemic (and society generally) wants to pull us apart.
And this is at the heart of my disagreement with your op-ed essay: the Body of Christ is served by the wise stewardship of all kinds of technology. How these new, and often old-but-reimagined, technologies get used in the service of the Gospel will require experimentation, learning, trial and error, and creativity.
No, it's not time to end hybrid worship, as you suggest. I suspect that in fact, we've only scratched the surface of what God has in store for us! And the best is yet to come!
Faithfully yours!
Andrew+
Posted by Andrew Gerns at 7:02 PM