Thy Will B. Dunn 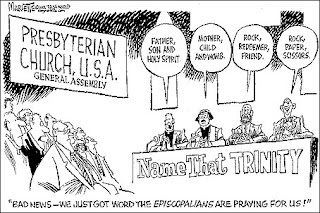 Heard on the radio last night that Doug Marlette died in a car crash in Mississippi. He was a political cartoonist who also drew a weekly strip called "Kudzu" which talked about life in a small southern town and looked at the religious life of that community through the character of Baptist preacher Will B. Dunn.

I particularly enoyeded the Church softball league which was an ongoing theme that first attracted me to the strip.

He was a gifted and sharp political cartoonist as well. He got himself into trouble at times. This may have been because he was one of the few cartoonists who could comment intelligently about the ironies, foibles, and pufferies of religious life. His rendering of Jesus rolling his eyes was first drawn about the goings on of Jim and Tammy Bakker in the 1980's. That cartoon still resonates today.

No one was safe from his pen and brush. Not even Episcopalians.

"Since I heard the news, I have been thinking about all the people he [ticked] off," says John Shelton Reed, who helped form the Center for the Study of the American South at the University of North Carolina and was a longtime Marlette friend. Off the top of his head, Reed lists the targets of Marlette's lampoons: Jim Bakker, Catholics, Muslims. "I can't think of a religious group he didn't offend. He even did a cartoon that upset the Episcopalians, and you know how hard it is to upset Episcopalians."

Of course, every regular reader of Kudzu knew that the Episcopal softball team were always holding up the game with processions, coffee hours, and strange arguments about the rules of the game.

“The creator endowed him with such creativity that he was literally one of a kind -- and a real Baptist,” said James Dunn, former executive director of the Baptist Joint Committee for Religious Liberty. He and Marlette had struck up a friendship in 1972, when both were speakers for a meeting at Crescent Hill Baptist Church in Louisville, Ky.

“He could see the ironies and the contradictions [in political or religious life] so clearly and then reduce them to just a few strokes in a cartoon,” Dunn said.

Dunn and another famous progressive Baptist preacher, Will Campbell, were reportedly the inspiration for one of the lead characters in “Kudzu,” a small-town Baptist preacher named Will B. Dunn.

James Dunn said Marlette, who was raised Southern Baptist, was strongly committed to the doctrinal distinctives that moderate Baptists celebrate, especially the priesthood of all believers and the separation of church and state.

“He was intensely committed to the notion that religion is ultimately a matter between the individual and God,” Dunn said.

It's too bad we've lost the voice and insight of Doug Marlette. We need him and people like him to bring us back to the earth where Jesus walked.

May he rest in peace and rise in glory.
Posted by Andrew Gerns at 8:27 PM