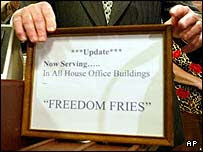 The Archbishop of Canterbury thinks thinks the war in Iraq is wrong and unjust. He also believes that Christian Zionism is dangerous and misguided. There is nothing new here. Just the same, Dr. Rowan Williams has found himself at the center of a controversy that was caused by the report of an interview that Williams gave to a Muslim life-style magazine called Emel.

Our dear Archbishop has been at the center of controversy before. He is known for speaking with a kind of unclarity that can drive people mad. In fact, I have been heard to point out that fact. But this time, Rowan is right. More accurately, he has been wronged.

This little tempest of half-truths and lies is not only shameful for the media and for those of us who jumped at the headline (I did too...I have the e-mails to prove my initial outrage), but it is a bad sign for the health of our discourse.

For background, read all about it here, and here.

Anyway, it appears that the Times of London deliberately misconstrued Rowan's remarks.

He has been against the invasion of Iraq since before the beginning of the war, and has also been in the past a harsh critic of Christian Zionism. There is nothing really new in the interview per se, but the Times lifted his words out of context and made them into a far more general critique of America.

Why would a paper spin the words of someone they are already on record as disagreeing with? Because the nature of political and religious discourse these days is to destroy the integrity of a person who disagrees with you. In this case, it aides and abetts those who wish the war to continue its sorry course by making any criticism of the war impossible to air in public.

Rowan is an easy target: he is far away (from us in the US, anyway, and for many people more of an idea than an actual person), and has managed in his time to make both liberals and conservatives in the Anglican Communion--especially in America--angry with him.

So to take his words and spin them to make him sound anti-American reinforces the prejudices that both liberals and conservatives already have about him. It's like shooting fish in a barrel: "ABC says not-nice things about America, and consorts with known Muslims!"

There is a dreadful purpose to all this spin. To make the ABC sound irrational both silences the core of his argument against the war, and reinforces the idea that is un-American to criticize the war.

So the Times has provided neo-cons, the American religious right and the Anglican divide with an ideological, theological and political hat-trick: silence critique of the war on patriotic grounds; distract attention away from the substance of the argument that Christian Zionism is at best misguided and at worst a kind of heresy; and, reinforce the idea that he is out of touch with American values and politics so that Anglican separatists and liberals alike can continue to disregard him.

It is old trick: why engage your opponent in debate when you can simply destroy his character? Not so long ago, as it happens just as the US was getting ready to invade Iraq, we did it to an entire nation. Remember "Freedom Fries?"
Posted by Andrew Gerns at 11:19 AM

Thanks, Andy. This is a good evaluation of this instance of yellow journalism. Who would have thunk that The London Times would have sunk so low?

But your statement that the ABC is not clear in his statements is ALSO right on. It is almost impossible to be truly ANGLICAN, that is, one who takes the Via Media even for the Archbishop of Canterbury. It is a sign of the seriously dangerous times we live in.