A moment of divine risk 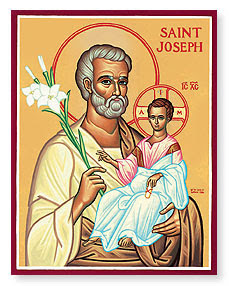 Joseph was a decent man and if Joseph had done “what is right” then we might be celebrating something other than Christmas.

Joseph was an honorable man and if Joseph has put honor ahead of mercy, then who knows how Jesus’ birth would have turned out?

Joseph was a faithful man, too, and it took a crisis and a dream of angels for him to look beyond decency and honor to discover mercy.

In an age where being religious and “having traditional values” is more and more an act of self-defense in the face of spiritual terror, today’s Gospel lesson comes as a shock. Jesus’ birth as God’s anointed, it turns out, rests both in the obedience of people to God and in the mercy of people to each other.

Joseph’s challenge was not obedience. He knew how to be obedient. His challenge was how to be merciful. And in choosing the mercy he did, he discovered—and made possible for all of us—a mercy deeper than sin and an obedience greater than our imagination.

Listen again to the Gospel—it happens so fast we can hardly notice. (We have to put aside for a moment our memory of Luke’s story of the nativity to hear this. Let’s look at Matthew’s story all by itself.) Joseph is betrothed to Mary. We don’t know if this is arranged or how this came about. Matthew says that Mary is found to be pregnant. In this Gospel we are not told how she is found to be pregnant, but she is and Joseph knows he is not the father.

Here is the hard truth: in her pregnancy, Mary has humiliated Joseph. Now Joseph has a choice—to marry anyway, or get a divorce. If he follows through with the marriage, there will be much shame and loathing because Joseph is either admitting to being intemperate and careless, or else he is a wimp who cannot stand up for his own dignity and respect in the face of a shameless woman.

Joseph does not even consider not divorcing Mary. It is the only right thing to do. But he has decided to do the ‘right’ thing with just a touch of mercy: he will divorce her but not put her through any kind of public trial or proceeding. This small bit of mercy does more to help Joseph’s reputation than help Mary. She would still be stuck—trial or not, she would be abandoned, unmarriageable, and alone with a child.

So Joseph will do the right thing, gently. Which seems like the best course until God sends him a dream and an angel.

The dream of angels shows him that God is up to something. It was God who caused Mary to be pregnant. Joseph dreams that God tells him to put aside his reputation with the neighbors, and to throw away propriety. If Joseph does what is expected and traditional then nothing will change. But to do what is merciful will carry forward God’s will. In his small world, Joseph is the one with all the power and God is telling him to surrender it.

I believe that Joseph was a decent man already given to mercy. It took a crisis and a dream of angels for Joseph to take Mary and her child as his own. In Joseph’s greater mercy, he let loose divine mercy. In Joseph’s greater obedience we are able to know God in a new way.

Joseph had no idea where this new obedience would take him and we are still working this out today.

Here is what God’s incarnation in Jesus Christ calls out of us: a new kind of obedience and deeper kind of mercy. I don’t know about you, but for me God’s challenge to Joseph to ground his obedience in mercy shakes me to the core.

I don’t want to think about how often my mercy has been conditional. I’d rather not contemplate when my obedience has been conventional. Deep down inside, I’d rather have God’s mercy let me off my hook so God can still convict others of their sin.

When we are in a pinch—when we have a choice or an ethical or a legal dilemma—what do we want? We want fairness. When a win-win solutions pops up, we might take it. What we really want is a measure of justice, and our kind of justice is measured by our self-interest. As human standards go, that isn't so bad. We bump along.

To be Gospel people in a rigid, fearful world means resting our obedience on mercy.

Obedient mercy may mean taking risks that could, in all truth, blow up in our faces and, just as likely, convey God’s saving, transforming grace to someone who desperately seeks it.

Imagine what God is waiting to let loose now.

Christmas blessings from one Anglican blog to another
Bosco Peters
http://www.liturgy.co.nz