The Christian Hope revisited and revived 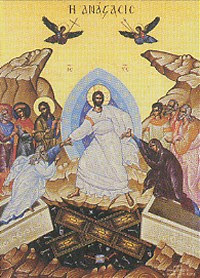 Bishop Tom Wright of Durham recently appeared on ABC News' Nightline. He is talking about is new book"Surprised by Hope: Rethinking Heaven, the Resurrection, and the Mission of the Church." In it he attempts to recover and bring forward to our time the classical Christian teachings about death, the Christian hope, and what we mean when we speak of a restored creation.

I find him very clear and useful. If the interviews I have heard are any indicator, then I am going to buy and read this book ASAP, and I am sure I will start to teach from it.

Wright provides a useful antidote to the damage done to many Christian's thinking about death and the life after death that modern pre-millennialism has done, particularly through the "Left Behind" series and that related school of thought.

He also a fills the void of silence that most Christians experience because they never hear in any kind of detail the doctrine of the Christian Hope except in snippets of the liturgy, particularly some Eucharistic prayers, parts of the Easter Vigil and in the Burial Office.

As Wright says, people are left to fill in the blanks. And that can be confusing, painful and difficult.

I found after many years in both parish ministry and clinical chaplaincy, that the Church can be very silent on this subject. Leaving the subject of Christian hope until a mumbled afterthought at the time of death is too little and is often forgotten in the interior noise and injury of acute grief.

So instead we fall back on teaching the tools to cope with and work through the grieving process.

Having been trained in helping people through their grieving process, I find that the therapeutic work--as useful and as powerfully healing as it can be-- is only one part of the whole picture. All the research tells us that successful grieving depends on the meaning the mourner assigns to the death. To give death meaning is to give life meaning.

Slave-holders would dispose of bodies without ritual. The Nazis did the same with the millions they killed in the Holocaust. They knew that to de-value death was to de-value the living.

That's why the pastoral ministry of Christian communities, clergy and chaplains is so very important. We can help bring meaning to life by bringing meaning to death. That is one reason that the Christian hope is so important.

For Christians to remember that in Christ God is not only wiping a moral slate clean but is redeeming and renewing all of creation is a profound statement of hope.

I believe that we can talk about and teach Christian hope in it's fullness, particularly what it means as baptized people to be taking part in God's unfolding redemption of creation, particularly the centrality of the cross and resurrection, as a profound sign of hope.

Here are some excerpts of the interview:

"Time was when in the old funeral services people used to talk about the sure and certain hope of the resurrection of the dead," said Wright. "If you took a straw poll across many, certainly mainline churches now, that would be replaced by a vague and fuzzy imagination that there may be a long and winding road going somewhere we're not quite sure."

"I think we have allowed ourselves to drift in what we say about the dead," Wright said."There are a lot of funeral services sadly which go that route these days, [where] death is nothing at all, I've just slipped away into the next room and so on. Anyone who's grieved and anyone who's worked with anyone who's grieved knows that it's a lie. Death is a monster, death is horrible."

"I've often put it like this, if somebody you know has been very ill, you say, 'Poor old so and so, he's just a shadow of his former self.' And the extraordinary truth in the New Testament is that if you are in Christ and dwell by the spirit you are just a shadow of your future self," Wright said. "There is a real you to which the present you corresponds as a photocopy corresponds to the glorious original. You know, there is a real you, which God is going to make and it will be more physical -- more real, not less."

From the transcript of the interview, Martin Bashir writes:

Wright hopes that his new book will revive belief in the prospect of a new, physical heaven and earth, which he says will somehow materialize when God decides to rebuild and restore the universe -- "Heaven and earth joined together in a new reality."

But this interpretation is the exact opposite of what many American Christians believe. The hugely successful Left Behind series of movies and books is an acopalyptic vision of the end of the world -- a view shared by many evangelicals. According to those who believe it, the end of the world will start with the so-called "rapture," when all Christians will be taken up to heaven in one momentous swoop. The earth then enters a period of cataclysmic wars until it eventually disintegrates, in a final chapter of fire. Wright says that is more mythical than Biblical.

"If you really believe that what happens at death is that you leave behind the world of space, time and matter, you are never going to be bothered with it again, you're never going to have a physical body again and that ultimately God is going to throw this whole world on the rubbish heap somewhere, then what's the fuss to work for justice in the present?" he said. "What's the fuss about AIDS, what's the problem about global debt, you know these are trivial and irrelevant. What matters is whether you're going to heaven tomorrow or next week."

Here is the transcript of the piece.

Here is a piece from Time magazine.

Hat tip to TitusOneNine
Posted by Andrew Gerns at 12:32 PM

Email ThisBlogThis!Share to TwitterShare to FacebookShare to Pinterest
Labels: Faith and Culture, Reflections

'...and that ultimately God is going to throw this whole world on the rubbish heap somewhere'

Wright hits the nail on the head again. He gets straight to the heart of Biblical teaching.

As it says in Hebrews 1 , 'In the beginning, O Lord, you laid the foundations of the earth and the heavens are the work of your hands. They will perish, but you remain; they will all wear out like a garment.
You will roll them up like a robe; ike a garment they will be changed.'

The earth will be thrown on the rubbish heap the way that we throw away old clothes that have worn out and perished.

It is good to see that theologians are not afraid to teach based on the Bible, even if it annoys some people.

I put a different emphasis in my approach: God completing and filling all things, all in all.

Preachers and teachers who focus on the destruction of the old, can forget that God wants to complete and renew creation because God declared it "good."

If God did not consider creation worth renewing and humanity worth loving then the whole exercise seems rather pointless.

The lesson of the Ark is that God is not doing a do-over because he regrets his mistake; but, as the cross shows us, God chooses to go great extremes to save us and give us the gift of renewed, abundant life--and establish his reign on earth--because creation (and us)are loved and cherished by God.

For me, the hope in the Christian hope is that the old is already passing away and one day we will see the completion and fulfillment of the new which has already begun.