On using the Bible for hate 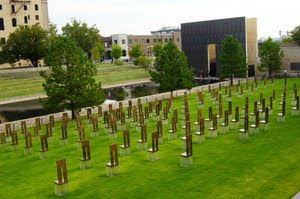 Last week Oklahoma State Representative Sally Kern said homosexuality is a bigger threat to the nation than terrorism or Islam. She says she says this because she is a Christian. She has chosen to use both her public office and her faith to spread hate, which is a stumbling block to the church and distorts the Gospel.

Here is the response of one young man to her words. He was prevented by state troopers from delivering the letter to her office in person.

On April 19, 1995, in Oklahoma City a terrorist detonated a bomb that killed my mother and 167 others. 19 children died that day. Had I not had the chicken pox that day, the body count would've likely have included one more. Over 800 other Oklahomans were injured that day and many of those still suffer through their permanent wounds.

That terrorist was neither a homosexual or was he involved in Islam. He was an extremist Christian forcing his views through a body count. He held his beliefs and made those who didn't live up to them pay with their lives.

As you were not a resident of Oklahoma on that day, it could be explained why you so carelessly chose words saying that the homosexual agenda is worst than terrorism. I can most certainly tell you through my own experience that is not true. I am sure there are many people in your voting district that laid a loved one to death after the terrorist attack on Oklahoma City. I kind of doubt you'll find one of them that will agree with you.

I was five years old when my mother died. I remember what a beautiful, wise, and remarkable woman she was. I miss her. Your harsh words and misguided beliefs brought me to tears, because you told me that my mother's killer was a better person than a group of people that are seeking safety and tolerance for themselves.

As someone left motherless and victimized by terrorists, I say to you very clearly you are absolutely wrong.

You represent a district in Oklahoma City and you very coldly express a lack of love, sympathy or understanding for what they've been through. Can I ask if you might have chosen wiser words were you a real Oklahoman that was here to share the suffering with Oklahoma City? Might your heart be a bit less cold had you been around to see the small bodies of children being pulled out of rubble and carried away by weeping firemen?

I've spent 12 years in Oklahoma public schools and never once have I had anyone try to force a gay agenda on me. I have seen, however, many gay students beat up and there's never a day in school that has went by when I haven't heard the word **** slung at someone. I've been called gay slurs many times and they hurt and I am not even gay so I can just imagine how a real gay person feels. You were a school teacher and you have seen those things too. How could you care so little about the suffering of some of your students?

Let me tell you the result of your words in my school. Every openly gay and suspected gay in the school were having to walk together Monday for protection. They looked scared. They've already experienced enough hate and now your words gave other students even more motivation to sneer at them and call them names. Afterall, you are a teacher and a lawmaker, many young people have taken your words to heart. That happens when you assume a role of responsibility in your community. I seriously think before this week ends that some kids here will be going home bruised and bloody because of what you said.

I wish you could've met my mom. Maybe she could've guided you in how a real Christian should be acting and speaking.

I have not had a mother for nearly 13 years now and wonder if there were fewer people like you around, people with more love and tolerance in their hearts instead of strife, if my mom would be here to watch me graduate from high school this spring. Now she won't be there. So I'll be packing my things and leaving Oklahoma to go to college elsewhere and one day be a writer and I have no intentions to ever return here. I have no doubt that people like you will incite crazy people to build more bombs and kill more people again. I don't want to be here for that. I just can't go through that again.

You may just see me as a kid, but let me try to teach you something. The old saying is sticks and stones will break your bones, but words will never hurt you. Well, your words hurt me. Your words disrespected the memory of my mom. Your words can cause others to pick up sticks and stones and hurt others.