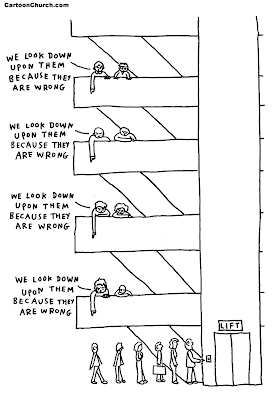 The perpetual in-fighting and nit-picking that church members, leaders and followers alike, is a potent deterrent to church attendance, membership and ultimately to discipleship. It doesn't matter which "side" we are on. For many, the "fight" has become more important than the Gospel itself. Our addiction to having to be right all the time has consequences.

For almost two decades, I scrambled to get my kids in a pew and looking presentable and awake on Sunday mornings.

This didn't always work so well, as any church-going mother can attest. One Sunday, we got halfway to church before I noticed that one of my three children was safely strapped in his car seat, but still in his pajamas. Another Sunday, my then pre-schooler headed down the aisle in front of the entire congregation, as his pants, abandoned by a forgotten belt, fell down around his ankles.

I was nonetheless determined to do the right thing by my upbringing, by my own mother, who drove me and my three sisters to Catholic school - and hence Mass, six days a week - when she and my father could barely afford the car to drive us. We were cultural Catholics who lived and breathed the mystery of faith. Ours was not to question. Ours was to believe.

Like a lot of young adults, I took a hiatus from regular church attendance during college and into my late 20s, returning full force only when I had children. I returned to the religion of my youth, albeit the Episcopal denomination, because I'd been taught church is what good people do on Sunday mornings. I returned because I wanted my children to be in community with tolerance, gratitude, love and giving back. I returned because I hungered for spiritual sustenance.

Apparently, this was not enough to hold me. I stayed the course for 20 years, ultimately becoming a leader in my church. I read the great masters of the world religions and participated in intensive theological study groups. I occasioned different churches and different denominations and even worked at some point with a spiritual counselor.

But try as I might, I couldn't resolve certain questions of faith.

When infighting broke out in the national Episcopal church over the consecration of a gay bishop, the ugly name-calling and self-righteous accusations in the name of God were more than I could reconcile emotionally and spiritually.

And so I quit.

The urgent need for religious people to be "right" all the time sucks the heart out of the Christian faith.

We, who believe that full Christian maturity happens in incarnational community, must look at articles like this and feel at best sadness.

We must resolve to find ways to live with our diversity and differences and model a way of being that exhibits God's love and transforming power to heal, rather than magnify our neuroses.

I have got to believe that God who made heaven and earth and all things visible and invisible, the God who made Word Flesh and dwelt among us, the God whose Spirit moved at the beginning of creation and animates, transforms and guides our hearts and minds, is a God who can break through our divisions. I also have to believe that people who dare to follow Christ can choose to have generous and open hearts.

I have to believe that we have the choice and the power to put an end to fervent, fruitless divisiveness that we perpetrate in the name of Jesus.

Every time a person says "I quit" because of church's pettiness, in-fighting or hyper-focus on what's wrong with the other guy, we cut loose another Christian soul who will strike out on their own. I don't know which is worse: that we have cut them loose or that actually walking away from Christian community feels good by comparison.

The honesty of this writer breaks my heart. But I know she is writing the truth.

Her story should drive us to repentance. It is a warning to all of us who care for Christian discipleship, Christian community and the spread of the Gospel.

I was so pleased to read this post. I've just unsubscribed from the blog of a very articulate kind and witty man, (Suddenly Christian is the name of his blog) because he suddenly felt the need to write about the 'sin' of homosexuality. Protests by readers began a hailstorm of virulent angry posts.

I was feeling sad and a bit bruised and rejected and I came here where I was gently reminded that I am being judgemental as well. I should remember what we have in common and not let these arguments mar my faith.

Bill Lewellis, Communication Missioner for the Diocese of Bethlehem wrote the following on the (ecunet) listserve "Bethlehem of PA."

> The urgent need for religious people to be "right" all the time sucks the heart out of the Christian faith.

In An Interview With The First Family Counselor, an essay of the late Rabbi Ed Friedman published recently in The Myth of the Shiksa, Friedman put these lines in the mouth of the devil he interviews: "The more anxious society becomes, the more they want certainty. So I delude everyone into confusing their models with reality ... But the critical factors in salvation are not subject to measurement."

At the same time, in regard to the column Andy brings to our attention (with his insightful comments) ... When the writer blames others (their "self-righteous accusations") for her decision to quit, I wonder about her claim that she is "finally being authentic." I wonder if one can at the same time claim authenticity and blame others, rather than take responsibility, for one's "authentic" decision. Is that authentic or reactive? Ironically, then, by becoming the hero of her own story, does she identify with the self-righteousness of those she blames?