Why Anglicans leave the prophesy to Pentecostals 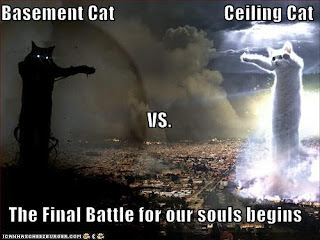 Corrected
The following appeared in the magazine of the Diocese of Pittsburgh:

Beloved in the Lord,
As the February TRINITY was going to press, a prophecy was sent to us by the Revd. Mark Stibbe, Rector of St. Andrew’s, Chorleywood, Diocese of St. Alban’s, England. Most of the clergy remember Fr. Stibbe as the keynote presenter for our fall clergy conference. The conference was a spiritual highlight of the year and extraordinary time of fellowship and ministry among our ordained leaders. Mark has often been to Pittsburgh and is a great friend of Bp. Joseph Garlington and of our brothers and sisters in Covenant Church.
The prophecy speaks for itself in the context of the momentous events that swirl around us. Our God loves us and loves His bride, the Church. I hope you will find as much encouragement in these words as the Leadership Team did.

So here's the deal. God is telling Bishop Duncan that it is God's will to split his diocese from the Episcopal Church. I think he is just stirring up the base with a theological sounding emotional appeal.

I find the use of such a "prophecy" by the Bishop to be a form of spiritual manipulation. If God has already given his blessing on the upcoming schism, then there's nothing to discuss, right? It is no longer a debatable point. It is God's will. Not only do we not have to talk about it, we don't even have to think about it anymore.

And, of course, anyone who speaks against this prophecy will have proven themselves to be against God's will. They will be identified as the enemy, and must not only be silenced, but must be cut from the community, so that they do not contaminate others with their apostacy.

This unusual tactic is more evidence that, in my opinion, it is past time to find some way to restrain Bp. Duncan, before he is allowed to do more harm to the Church.

The link between the comments of Canon Hays and Bishop Duncan, and between those and the confirming words of Fr. Stibbe, is that they all point to the purposeful realignment of the Diocese of Pittsburgh with another province of the Anglican Communion THIS YEAR. This is of course in line with the timeline of the Common Cause Partnership which calls for a "Constitutional convention for an Anglican union held at the earliest possible date agreeable to all the Partners." 2008 is the year for Pittsburgh to make its stand, yes or no, to the Common Cause Partnership effort. Both Bishop Duncan and his Canon Missioner are pushing the matter. Fr. Stibbe sees the year 2008 as the Year of the Gate. He is pushing too.

This should put to rest any question as to whether or not Bishop Duncan intends to abandon the communion of this Church. I have stated previously that I believe Bishop Duncan when he says he will continue to be loyal to the Constitution and Canons of the Episcopal Church so long as he is active. He will be true to his word.

Still, assuming the decision of the Diocesan Convention in Pittsburgh is to leave, he might well resign or retire effective immediately and reconstitute his ministry in a Province far away, against the day when he and fellow bishops in temporary exile there might return to be the true true church in North America.

Duncan has predicted that this is the year for quite a few years now. But this could well be the year, since the Bishops that refused to ratify the inhibition of Bishop Duncan earlier this year did so on the basis of lack of action by the Diocesan convention in Pittsburgh. It is very apparent that this action is coming soon.

Another chapter in the confrontation between the ceiling cat and the basement cat.
Posted by Andrew Gerns at 9:29 PM

The issue seems to be missing from the web site now.

Ann is right. The link to the issue of the magazine in question is broken on the diocese of Pittsburgh web site. For 2008, only the current issue appears and the two months function as one link.

The direct link to the PDF of the magazine is still functional.

Maybe a coding error when the new issue was posted? I hope so.

I discovered a document which proves that such prophesy is actually orthodox anglican.