The morality of healthcare funding 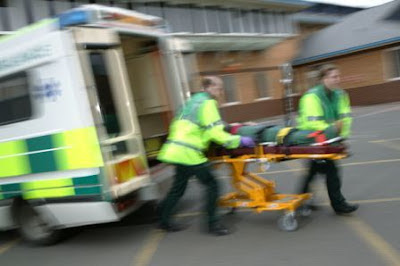 Over on Episcopal Cafe, I wrote a two-part piece on how health-care is funded in this country and the moral implications of the current approach.

The situation of a person in my parish, who was treated for a stroke a few years ago, and spent the rest of her life trying to pay the tens of thousands of dollars of debt she was left with, working as many hours as she could in a local gas station/convenience store.

Read it here and here.

I enjoyed a gentle, good-natured nudge in the ribs that Chaplain Marshall Scott sent my way in the comments after part II of the series. He reminds me (and the blogosphere...) that I used to work as a chaplain in a for-profit hospital (in a very big company). Before that, I worked in non-for-profit religious and community hospitals.

Marshall and I were members of the Association of Professional Chaplains and the Assembly of Episcopal Healthcare Chaplains together. At one point, we were both on the executive committee of AEHC. I was trying to organize the chaplains in my big hospital company and Marshall was telling me that for-profit healthcare was, well, sin. He is a smart guy and a primo chaplain.

Everyone should read Marshall's essay on his blog called Health Care and "the Market" which talks about the 'retailization' of health care. Marshall says that treating health care like a retail product is at once sinful and doesn't work.

It doesn't work because the actual customers in this approach to healthcare delivery is that the "customer" is not the patient nor the community but the doctors and insurers that bring patients to hospitals.

It is sinful, he says, because it reduces healthcare to a commodity that can be packaged and peddled instead of an obligation that we have towards one another.

His writes that retail/marketing models of health care fails because the "customer" is not the patient but the doctors and insurers who deliver the patients. Patients, especially poor ones like Polly, don't fit that model for a variety of reasons but most of all because no one wants to pay for them.

Medicare and Medicaid which began as an insurance program (in the old model) for the elderly and poor has become a government-funded member of the insurance market. Medicare led the way in eliminating cost-shifting as a way to save the program money. The approach has failed: the program costs more and more,but pays a smaller and smaller portion of the patient's bill which pushes the poor out the health care door as providers (doctors and hospitals) can no longer afford to take Medicare assignment.

And, yes, it's true. As a chaplain I worked in both the non-profit and for-profit health care world. And it is true that Marshall would tell me about the sins of the retail approach to healthcare that these companies advocate. (And the sins of for-profit hospitals like the company I worked for!)

When I was in a non-profit hospitals (both religious and community) they used to say routinely "no margin, no mission." My response to Marshall, if I remember correctly, (it's been a while...) is that on the margin side I saw little difference between a for- or non-profit hospital in terms of their participation in the retail approach and their quest for greater margins, higher reservers and lower costs.

Where I live now, the two largest hospitals are non-profit and they have huge cash reserves and huge annual margins.

There is some local controversy about how these institutions should use their resources to improve local access. They tout their high charity care figures. But I think that these are misleading, because these figures are mainly write downs of noncollectable debt rather than the use of their margin for the health of the community.

Two other area hospitals are non-profit. One is in an urban area and is serious enough trouble that one of the big guys is looking at absorbing it. The other is across the state line, in a regulated state, but gets most of it's patients from Pennsylvania (which does not require hospitals to get state approval for medical services and buildings) and so is in a life-and-death struggle with the two big players in the area. The hospital in my town is for-profit and is in many ways the weakest of the five area institutions (spread over eight hospital facilities) that I visit patients in regularly.

I wish the big-guys would use their margins to provide primary, routine, non-emergency care to the poor and under-insured in their services areas. This idea has been, with few exceptions, a non-starter.

Instead the margins and reserves are used to buy more and more bells and whistles which both drive up costs and are designed to bring in more specialists and the patients they bring.

A multi-million dollar center for gastric bypass techniques and for "lifestyle medicine" in a non-profit setting is, to me, a sin compared with the huge primary care gaps that could be addressed fairly simply. Gastric bypasses are fine, and they certainly generate volume and income for the hospital, but not at the expense of the more humdrum, non-profitable (and cheap) work of diet education and counseling close to where people live and work.

This is what I mean that for- and non-profit don't make much difference because they act alike. But it is clearly a result of what Marshall Scott calls "retail" healthcare.

Another thing is that in our "market," there is immense unregulated competition often over the same services. Every hospital does some sort of open-heart, oncology, orthopedics, emergency. We have one Level One trauma center, and three Level Two trauma centers. The biggest hospitals deliver babies and have pediatrics: both in former community hospitals that now only deal with "women and children." There are a variety of private walk in labs, surgery centers, and rehabilitation centers who both feed patients to the hospitals and divert them. But this unregulated competition does nothing to hold down costs, creates massive repetition of services and creates strange ethical situations (which I may talk about another time) because there are just not enough warm bodies in my area to support four full blown open heart programs.

Those who say that competition creates lower cost and efficiency just don't understand the economics of health care.

It's not all bad. The idea of central services and central purchasing probably does help contain costs and makes life better for caregivers. I just wish they'd apply that logic to the competing bureaucracies of insurers and providers instead of the massive repetition the current approach requires.

I mean, to use one example, if the banking industry can agree on a common standard that allows my ATM card to work at any machine in any bank--and my money and the information that goes with it is pretty important--and in nearly every store, why can't the healthcare industry and insurers agree on a single entry format for gathering the basic information that everyone in the system always needs?

Getting back to Marshall's gentle nudge: the thing about for-profit health care that I object to most is that the margin in a for-profit does not return 100% to the hospital (and community) but to shareholders and to taxes. I don't know if paying back a bond-holder (made up of investors) is all that difference from paying dividends to stockholders (except that bondholder doesn't get to direct your mission...yes, Marshall, I remember you're telling me that, too!). But I find tax-paying hospitals to be problematic.

When a community depends on a hospital as their major local taxpayer, as if it is a factory or a store, it reinforces the idea that health-care is a commodity to be packaged and exploited rather than an obligation we share.

For-profits will include the taxes they pay as part of their "community benefit reports," along with their "charity care" figures...neither of which has to do with improving the overall access of the poor and under-served.

The issue for me to refocus our healthcare "system" (sic) towards patients and communities and less towards satisfying insurers and defining "markets" that have little to do with community need.
Posted by Andrew Gerns at 12:42 AM

Email ThisBlogThis!Share to TwitterShare to FacebookShare to Pinterest
Labels: Justice

Andrew, my friend, thanks for your kind comments - even after the poke!

I still feel for-profit health care is sinful; and I also agree that not-for-profit health care that doesn't invest its margin in improving care and access to it is also sinful. If the money isn't going into improvements in care or access to it (and, after all, one hopes that is the goal of taking on the debt from the bondholders), there is the slimmest paper difference between for- and not-for-profit.

Blessings, my friend; and keep fighting the good fight.