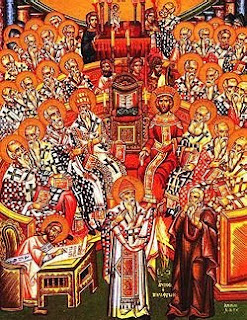 Over on the Daily Episcopalian, Derek Olsen is writing a series called "Seven Dates and Why They Matter for the Anglican Faith." Today's installment is "AD 325 and Why it Matters." I recommend it for a number of reasons. Olsen talks about the background surrounding the Council of the Nicea, both historical and theological. He explodes a few myths that many Christians hold, and also undoes a few of the favorite errors perpetrated by the History Channel and Dan Brown set.

The reign of Constantine and his blessing on the flourishing faith raised a host of issues—some neither easily nor quickly solved. One—the tension between the Roman social structure and the counter-cultural character of Christianity—has remained a live issue to the present day (and will be addressed in a later article). Of the rest, two urgent problems pressed to the fore. The first was political and administrative: how would structures that emerged locally fit themselves into a coherent empire-wide system and where would authority reside? The second was theological and doctrinal: what was the proper way to understand the relationship between Jesus and God? The vacuum of authority created by the first problem exacerbated the second. Constantine saw trouble brewing. The faith that he hoped would help cement the embattled empire was threatening to cause further rifts. Taking matters into his own hands, he called a meeting of bishops to the city of Nicaea in the year 325.

At this point it’s worth clearing up a little bit of confusion about Constantine, his motives, and his personal beliefs. Constantine was probably introduced to Christianity at a young age; his mother was a Christian (her search for the relics of the Holy Cross read like a fourth-century Indiana Jones tale but several versions have deplorable anti-Semitic bits) and some sources relate he had a sister named Anastasia which means “Resurrection”. Despite this, he was not baptized until he was on his deathbed. This was not unusual in the fourth century, though, especially for those who held political office. Theologically the Church of the day had a strong sense of Baptism and the remission of sins connected with that act; they were a little fuzzy on forgiveness of major sins committed after baptism. The realities of political office (presiding over torture and executions and participating in public religious ceremonies to the state gods or the official supreme god, the Unconquered Sun) made committing sins inevitable. Thus, Constantine and others put off their baptism until they had retired from public life and no longer had to participate in these activities. As far as Constantine’s personal beliefs go he served as a proper emperor, honoring the state gods and the Unconquered Sun in his public capacity, but no less authority than the late great Henry Chadwick states that “his letters from 313 onwards leave no doubt that he regarded himself as a Christian whose imperial duty it was to keep a united Church” (The Early Church, p. 127).

Trinitarian theology tends to be very complicated because it did not begin as an intellectual exercise: if people had sat down and thought it up, it would make a lot more sense! Instead, this theology proceeds from the realm of Christian experience. Christians knew from their Scriptures and from their Jewish roots that God was unmistakably and unquestionably One. In their religious experience, though, they perceived the working of God in three persons: God the Father, God the Son (Jesus), and God the Holy Spirit. The problem of Trinitarian theology was how to wrap limited and limiting human language and concepts around the power of God that they had experienced in their lives.

The reason why this became necessary and pressing was because the theological formulations had very practical, pastoral consequences. Understanding the divinity of God the Son was not simply an arcane puzzle for specialists but rather was intimately connected to who God was and how God interacted with creation. In a sense, Arius thought that he had discovered a formulation that would preserve the dignity of God the Father. After all, the great scandal of Christianity to the philosophical minds of the time is why a god who existed as spirit would have anything to do with flesh and matter which was inherently imperfect and corruptible.

Take a look here. See also the first two entries here and here. Derek's blog is haligweorc.
Posted by Andrew Gerns at 8:29 AM