The text is not to be confused with the Word 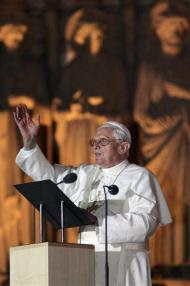 “Scripture requires exegesis, and it requires the context of the community in which it came to birth and in which it is lived. This is where its unity is to be found, and here too its unifying meaning is opened up. To put it yet another way: there are dimensions of meaning in the word and in words which only come to light within the living community of this history-generating word. Through the growing realisation of the different layers of meaning, the word is not devalued, but in fact appears in its full grandeur and dignity. Therefore the Catechism of the Catholic Church can rightly say that Christianity does not simply represent a religion of the book in the classical sense. It perceives in the words the word, the Logos itself, which spreads its mystery through this multiplicity. This particular structure of the Bible issues a constantly new challenge to every generation. It excludes by its nature everything that today is known as fundamentalism. In effect, the word of God can never simply be equated with the letter of the text.”

In short, the scripture points to the Word of God, Jesus. We encounter the Logos in the nuances and layers of Scripture.

He believes that the rational interpretation of scripture is essential to counter the subjectivism of secular culture. He sees fundamentalism as expression of human subjectivity. National Catholic Reporter says:

The pope went to argue that two elements have been constitutive of the monastic experience: Scripture, including a commitment to rational interpretation of the Word of God, excluding “everything that is today known as fundamentalism”; and manual labor, understood as a sharing in the creative work of God.
Along the way, there were a few vintage Benedict touches, such as the insistence that freedom does not mean the mere absence of obligation, but rather the possibility of freely seeking and embracing the truth. That understanding of freedom, Benedict argued, wards off the twin dangers of “fanaticism and arbitrariness.”

Reuters blog FaithWorld: Regensburg watch over, pope raps Biblical fundamentalism
NCR: Pope in France: No reference to Muslims, but a call to resist 'disaster for humanity'
Posted by Andrew Gerns at 7:51 PM

Email ThisBlogThis!Share to TwitterShare to FacebookShare to Pinterest
Labels: Scripture