the gods must be crazy 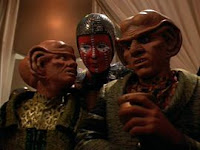 The best question not answered during the whole second presidential debate last night was when one woman asked "is it right to treat medical care as a commodity?"

The question was so good, that not only did neither Obama nor McCain get it, but neither did Tom Brokaw when he rephrased it.

The question was open heresy. The questioner should be bound, shackled, made to repent and then burned at the stake for her own sake and ours. This person questioned the basic tenets of The Market. According the Theology of the Market, the answer to the question is "of course! Everything ought to be treated as a commodity!"

All of this brought to mind an essay Harvey Cox wrote in 1999, in which he analyzed the theological language of the business papers.

He says that in this new religion, a religion many of us follow and take for granted every day, business is our cultures religion and The Market is god. At the time of his essay, the big financial panic was the collapse of the East Asian banks. Given what we have experienced in the last few months, what he wrote then is even more relevant today.

A few years ago a friend advised me that if I wanted to know what was going on in the real world, I should read the business pages. Although my lifelong interest has been in the study of religion, I am always willing to expand my horizons; so I took the advice, vaguely fearful that I would have to cope with a new and baffling vocabulary. Instead I was surprised to discover that most of the concepts I ran across were quite familiar.

Expecting a terra incognita, I found myself instead in the land of déjà vu. The lexicon of The Wall Street Journal and the business sections of Time and Newsweek turned out to bear a striking resemblance to Genesis, the Epistle to the Romans, and Saint Augustine's City of God. Behind descriptions of market reforms, monetary policy, and the convolutions of the Dow, I gradually made out the pieces of a grand narrative about the inner meaning of human history, why things had gone wrong, and how to put them right. Theologians call these myths of origin, legends of the fall, and doctrines of sin and redemption. But here they were again, and in only thin disguise: chronicles about the creation of wealth, the seductive temptations of statism, captivity to faceless economic cycles, and, ultimately, salvation through the advent of free markets, with a small dose of ascetic belt tightening along the way, especially for the East Asian economies.

We are experiencing right now, in Cox's words, a crisis which shakes our "belief in this new dispensation." There are calls for new regulation. In fact, some believers in the God of the Market now claim that we sinned in not regulating more. Even though, in 1999,

Greenspan, usually Delphic in his comments, was decisive. He believed that regulation would only impede these markets, and that they should continue to be self-regulated. True faith, Saint Paul tells us, is the evidence of things unseen.

Does this new found respect for regulation represent a loss of faith? A mass apostasy by the apostles of The Market?

Let's look back at Cox's essay and remind ourselves of the heart of the theology of the God of the Market:

At the apex of any theological system, of course, is its doctrine of God. In the new theology this celestial pinnacle is occupied by The Market, which I capitalize to signify both the mystery that enshrouds it and the reverence it inspires in business folk. Different faiths have, of course, different views of the divine attributes. In Christianity, God has sometimes been defined as omnipotent (possessing all power), omniscient (having all knowledge), and omnipresent (existing everywhere). Most Christian theologies, it is true, hedge a bit. They teach that these qualities of the divinity are indeed there, but are hidden from human eyes both by human sin and by the transcendence of the divine itself. In "light inaccessible" they are, as the old hymn puts it, "hid from our eyes." Likewise, although The Market, we are assured, possesses these divine attributes, they are not always completely evident to mortals but must be trusted and affirmed by faith. "Further along," as another old gospel song says, "we'll understand why."

As I tried to follow the arguments and explanations of the economist-theologians who justify The Market's ways to men, I spotted the same dialectics I have grown fond of in the many years I have pondered the Thomists, the Calvinists, and the various schools of modern religious thought. In particular, the econologians' rhetoric resembles what is sometimes called "process theology," a relatively contemporary trend influenced by the philosophy of Alfred North Whitehead. In this school although God wills to possess the classic attributes, He does not yet possess them in full, but is definitely moving in that direction. This conjecture is of immense help to theologians for obvious reasons. It answers the bothersome puzzle of theodicy: why a lot of bad things happen that an omnipotent, omnipresent, and omniscient God — especially a benevolent one — would not countenance. Process theology also seems to offer considerable comfort to the theologians of The Market. It helps to explain the dislocation, pain, and disorientation that are the result of transitions from economic heterodoxy to free markets.

Since the earliest stages of human history, of course, there have been bazaars, rialtos, and trading posts — all markets. But The Market was never God, because there were other centers of value and meaning, other "gods." The Market operated within a plethora of other institutions that restrained it. As Karl Polanyi has demonstrated in his classic work The Great Transformation, only in the past two centuries has The Market risen above these demigods and chthonic spirits to become today's First Cause.

Cox was not the first one to realize and write about the religion of The Market. At about the same time as Cox's essay, the writers of Star Trek: Deep Space Nine, wondered what a culture would be like if it's whole cosmology was built around commerce. So we have The Rules of Acquisition:
Cox concluded his essay with this observation:

There is, however, one contradiction between the religion of The Market and the traditional religions that seems to be insurmountable. All of the traditional religions teach that human beings are finite creatures and that there are limits to any earthly enterprise. A Japanese Zen master once said to his disciples as he was dying, "I have learned only one thing in life: how much is enough." He would find no niche in the chapel of The Market, for whom the First Commandment is "There is never enough." Like the proverbial shark that stops moving, The Market that stops expanding dies. That could happen. If it does, then Nietzsche will have been right after all. He will just have had the wrong God in mind.

The crisis today is apparently a crisis of faith. Without significant offerings of cash, then The Markets will freeze and no one will be able to get ordinary credit. No one is loaning money at the macro level, everyone is hoarding because they don't know if today's loan will ever get paid back tomorrow, of if "good paper" will be tainted by "bad paper." As Thomas Friedman put it today in the New York Times:

We are in the middle of an economic perfect storm, and we don’t know how much worse it’s going to get. People all over the world are hoarding cash, and no bank feels that it can fully trust anyone it is doing business with anywhere in the world. Did you notice that the government of Iceland just seized the country’s second-largest bank and today is begging Russia for a $5 billion loan to stave off “national bankruptcy.” What does that say? It tells you that financial globalization has gone so much farther and faster than regulatory institutions could govern it. Our crisis could bankrupt Iceland! Who knew?

And we have not yet even felt the full economic brunt here. I fear we may be at that moment just before the tsunami hits — when the birds take flight and the insects stop chirping because their acute senses can feel what is coming before humans can. At this moment, only good governance can save us. I am not sure that this crisis will end without every government in every major economy guaranteeing the creditworthiness of every financial institution it regulates. That may be the only way to get lending going again. Organizing something that big and complex will take some really smart governance and seasoned leadership.

Together we have built this idol, constructed a religion and world view and lived under it's rules. Now we are shaken to our core. Jesus' teaching never seemed more true (at least to this generation):

"Whoever is faithful in a very little is faithful also in much; and whoever is dishonest in a very little is dishonest also in much. If then you have not been faithful with the dishonest wealth, who will entrust to you the true riches? And if you have not been faithful with what belongs to another, who will give you what is your own? No slave can serve two masters; for a slave will either hate the one and love the other, or be devoted to the one and despise the other. You cannot serve God and wealth."

well done, Andy. It's no wonder that God's first commandment is 'you shall have no other gods before me.' As someone raised a capitalist and who made a living 'over there' for 20 some years, I can attest to the simple fact that greed will always find a way around the rules somehow. The Market god has been exposed as a fraud, but the conservatives will never admit it crying, 'we haven't let it work yet.' What the free market has done was well summarized in Doonesbury this AM: privatize profit and socialize risk. That is pure evil.