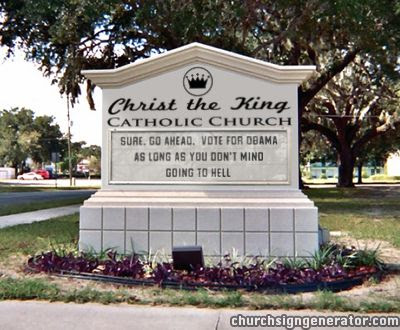 Bishop Paul Marshall shared the following with the members of the Diocese of Bethlehem today on our listserv. I reprint it here with his permission.

American Roman Catholic bishops declared this week that passage of an abortion rights bill would be an "attack on the church." We call this leading with the chin.

Their calling a bill wrong would be one thing, and I might very well agree. Choosing to feel "attacked" is very dirty pool, somewhere between the sins of emotional hostage-taking and political terrorism. As a former professor, I associate such behavior with second-year seminarians, who usually rapidly outgrow it when they hit CPE. Their claim to feel attacked reflects the ghetto mentality that died in Catholicism in after WWII. Ask Andrew Greeley.

On Friday there was an AP story on a Roman priest who believes that vote for Obama mandates exclusion from communion. The Rev. Jay Scott Newman of Greenville, SC has single-handedly fulfilled the worst fears of 19th-century Americans who wished to exclude new Catholic immigrants from our national life because they believed that the Catholic Church would eventually become a voting block under the control of single gentlemen with an allegiance to the head of a tiny Italian city-state that thinks it is successor to the Roman Empire. What could this priest be thinking? Should we see the tragedy of a neo-nativist or, worse, an anti-religious uprising in the US, Fr. Newman will have only himself and his bishops to blame.

Fortunately for the papal church on these shores, it is not the position of its hierarchy that the 54% of Roman Catholics who voted for Obama are to be excommunicated. (This is to say nothing of the 90% of the faithful that use birth control.)

Why is it that almost always it is (single) males who take extravagantly extreme positions on this subject? This is not a rhetorical question, but one that perplexes me deeply. It has been (wrongly) said that if men could get pregnant, abortion would be a sacrament. That is not correct, but it makes a point.

Obviously the suggestion that the president-elect is "the most radical pro-abortion politician ever to serve in the US Senate" is incorrect by any standard. Fr. Newman must be a very, very young man, or else one who shares the historical amnesia that makes all Americans lepers in the world of ideas.

If I could, I would tell this clerical person that I do not know a soul who is "for" abortion.

I cannot assess the general run of Christians, but I have considerable experience of the clergy, and I have never found an exception to my observation that clergy who adopt a histrionic stance on this question (or the gay question) either have significant unresolved personal issues or else wish cynically to exploit the emotions of others in order to build their own empires. Or both. The problem is not limited to the presbyteral order, as we have occasion to know in our own Commonwealth. I think it is historically indisputable that unpopular bishops get hysterical about abortion and unpopular presidents exploit security concerns or even start wars in an attempt to stuff empty suits or shore up flimsy positions.

One may very well have a relatively conservative position on abortion (I certainly do), or even find it a question of moral absolutes (as some writers on this meeting clearly do). In either case there is plenty of empirical evidence to the effect that it is possible to hold such positions without un-churching those who come to other conclusions after wrestling with the same evidence.

My experience is that people who take aggressively absolutist positions in obviously gray areas are either not telling us something or else not telling themselves something. For myself, I find that when people who are a whole lot smarter than I am find room to disagree on a difficult question I need to to be very cautious about drawing lines or building walls. This isn't necessarily the virtue of humility; it is common sense.

There is a reason that the Book of Common Prayer does not have a day called a "Feast of Christ the King," some local practices notwithstanding. That feast was created in Rome in the early 20th Century (the encyclical is Quas primas of 1925) in opposition to the ideals of democracy, protestantism "and the evils of anticlericalism," among other things. Gullible protestants baptized the toned-down Vatican II version, but our liturgical reformers (esp Boone Porter) were not as easily fooled. How right they were. How right they were. Quas primas insists that religion must rule the secular order. The Baltimore meeting of bishops and Fr. Newman seem very much of that school.

I, for one, protest. I should prefer not to have someone else's religion presume to rule the land, especially not by blackmail--Anglicans suffered from oppression under the religiously certain in New England under Congregationalist tyrants. Let us settle issues on their moral and practical elements according to our brains and consciences (religiously-formed or otherwise), without claiming that we are "attacked" or that people who quietly vote according to their consciences may not receive sacraments. Sacraments are carrots, not sticks.

All Roman Catholics do not, I repeat, do not, think the way these noisy bishops and Fr. Newman think. I pray that their church finds a way to honor their consciences, inasmuch as it teaches that it is a grave sin to violate conscience.