When in doubt, blame God 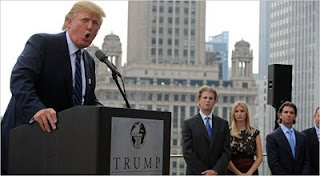 Donald Trump says the economic downturn is an act of God. He said in response to a lawsuit against him by Duetsche Bank that the reason he fell behind on his loan payment is that (a) the lending bank is making it impossible for him to lease the space at current (falling) market rates and (b) he in the hole because of "an act of God."

He points to a “force majeure” clause in the lending agreement that allows the borrower to delay completion of the building if construction is hampered by such things as riots, floods or strikes. That clause has a catch-all section covering “any other event or circumstance not within the reasonable control of the borrower,” and Mr. Trump figures that lets him out, even though construction is continuing.

“Would you consider the biggest depression we have had in this country since 1929 to be such an event? I would,” he said in an interview. “A depression is not within the control of the borrower...."

He wants a state judge in the Queens borough of New York to order the bank to delay efforts to collect the loan until “a reasonable time” after the financial crisis ends.

At the same time, God's alleged actions in nature or the market have little bearing on the people who rent from Trump:

Mr. Trump, it may be noted, does not think remorseful condominium buyers are in a similar position. When I asked him if he would let them walk away from contracts to buy apartments at predepression prices, he said he would not. “They don’t have a force majeure clause,” he said.

This clause, typically reserved for unexpected fires and weather related phenomenon, might not be completely unreasonable if we take a good look at biblical history.

I think this is proof that Trump has his gods mixed up.
Posted by Andrew Gerns at 10:49 AM