The cross in an inattentive world 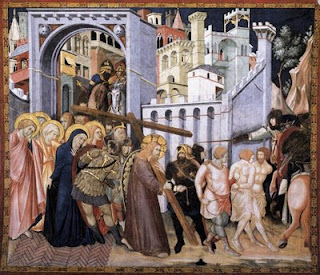 You want to know what I find so startling about today, this Good Friday, in the middle of most important three days of the Church’s year? What I find startling is that today is not that different from any other day. Sure, the stock markets closed today in New York and in Europe. I haven’t looked to see if it the banks were open, but who cares? There are ATMs and on-line banking anyway. I think the mail came. I know that UPS delivered a package to our closed office this morning. But in my trek from Trinity over to St. John’s Lutheran for the noonday ecumenical service, there was the same traffic. More actually. There were loads of kids and their parents going into the Crayola Factory. The restaurants are busy, and the buses were stacked up at the west side of the Circle right on time.

Life is going on right around us, with hardly a thought as to what day today is.

Good Friday is important to us Christians, so central that we think that everyone ought to get the message and slow down. I remember when 9/11 happened. I was living about 800 miles away from Ground Zero in Marietta, Ohio. And what I remember most about that day and the weeks that followed is that everyone seemed to be equally affected by the enormity of that tragic day. Flags were everywhere. Respectful silences were observed. People talked in hushed tones.

But Good Friday is not like that. Not at all. Everyone is resolutely going about their business. People are buying…ironically, they are buying Easter baskets and Easter dresses. There was an Easter egg hunt going on within sight of our church.

Now some of us may be shocked by that. Those of us who have twinge of nostalgia for the old days…who remember Blue Laws and such…may think of this as bad news. But the news here is neither good nor bad. It just is. It is how the world works. It is just this kind of busy, distracted, workaday world that God sent his son into.

I remember when my father died, and then six months later, my mother was dying. Both times it meant a long drive from southeastern Ohio to New Hampshire, where my parents moved to be near my oldest brother. Both times it meant going through the rituals of funeral home, funerals (in my Dad’s case in two places…one where he was a deacon, and one at the church where he was interred), of meeting people—some of whom I had not seen in ages if ever—and then going from place to place and then the long drive home.

And during all of that, when my world was so focused on my parents and my family and each loss, the normalcy of the world seemed so out of sync with the very small, very slow world I was living in with my brothers and our families. Both times it felt like I was inside a bubble where time, even light itself, seemed to slow to almost nothing, while the world around us sped as if they were on fast forward.

I think that for the people who walked that first way of the cross, this is just what was going on. The parade of prisoners on the way to Golgotha was probably a nuisance, holding up traffic. The wailing women were a public disturbance. The practiced urbanites of Jerusalem probably saw demonstrations and spectacle (and marches to the gallows) so they just averted their eyes and walked past as if it weren’t there.

Besides if you stopped to stare at the spectacle, you might be unlucky enough to be picked out by one of the guards and forced to carry one of those gawd-awful filthy crosses. Like that poor Simon of Cyrene. As if the guards were saying, you wanna look? I’ll give you a real close look! Now wouldn’t that just ruin your day?

But even the guards, except for a few who had eyes to see, saw this as just another day at work.
No, the world just went about its business when Jesus was crucified. Time only stood still for those who were most deeply involved. Jesus’ mother and the women who stayed with Jesus through it all, the disciples who watched from a distance: they were inside the bubble. They were the ones that saw the rest of the world in Fast Forward, if they noticed the world all.

For us in here, we who are gathered in darkness at the foot of the cross, it may have something of the same quality. Of being in a bubble, an alternative world from the rest of life “out there.”
But come to think of it, there is that quality about living life in Christ, isn’t there? That we are aware of something that others might miss. We’d be tempted to hold it over them. To hold it against them.

Except that I have this strange feeling that if I found myself along the Via Dolorosa before it was called that, that I would be looking at my Treo, drumming my fingers, averting my eyes waiting for the parade to pass by. Maybe I’d mutter a “poor sap” at the poor fellow with the thorns around his head.

They did not stay inside their bubble for long. The resurrection would burst their bubble, and they would step out of the slow time of grief, and enter, not into the Fast Forward time of the world, but into God’s time. They would come out and first tell each other that this death was like no other death, and this man like no other man. Soon they would be telling a very busy world, that God was there among them and they didn’t even know it and he was killed and he is alive. And through his death, we are made whole. Their seeing allows us to see.

When we walk to the cross, we are not in a different time. We are in God’s time. And when we step out of here, we who have witnessed the cross will through our words and story help others see the cross for themselves.

Dean Nicholas Knisely has a similar theme in his reflection which you can find here. We did not check each others notes.
Posted by Andrew Gerns at 11:37 PM