What would Supply Side Jesus do? 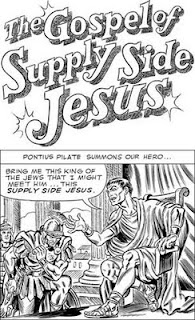 The Lead at the Episcopal Cafe reported last fall on the Conservative Bible Project. The goal of the project is to "develop a conservative translation that can serve, at a minimum, as a bulwark against the liberal manipulation of meaning in future versions." Some of their guidelines include:

Framework against Liberal Bias: providing a strong framework that enables a thought-for-thought translation without corruption by liberal bias

Not Emasculated: avoiding unisex, "gender inclusive" language, and other modern emasculation of Christianity

Not Dumbed Down: not dumbing down the reading level, or diluting the intellectual force and logic of Christianity; the NIV is written at only the 7th grade level

Utilize Powerful Conservative Terms: using powerful new conservative terms as they develop; defective translations use the word "comrade" three times as often as "volunteer"; similarly, updating words which have a change in meaning, such as "word", "peace", and "miracle"

Exclude Later-Inserted Liberal Passages: excluding the later-inserted liberal passages that are not authentic, such as the adulteress story

Some ideas for work include:

The earliest, most authentic manuscripts lack this verse set forth at Luke 23:34: Jesus said, "Father, forgive them, for they do not know what they are doing."

Is this a liberal corruption of the original? This does not appear in any other Gospel, and the simple fact is that some of the persecutors of Jesus did know what they were doing. This quotation is a favorite of liberals but should not appear in a conservative Bible.

The idea is not going away. The AP reported this week:

The project's authors argue that contemporary scholars have inserted liberal views and ahistorical passages into the Bible, turning Jesus into little more than a well-meaning social worker with a store of watered-down platitudes.

"Professors are the most liberal group of people in the world, and it's professors who are doing the popular modern translations of the Bible," said Andy Schlafly, founder of Conservapedia.com, the project's online home....

...This liberal slanting, Schlafly argues, ranges from changing gendered language — Jesus calling his disciples to be "fishers of people" rather than "fishers of men" — to more subtle choices, like the 2001 English Standard Version of the Bible, which uses "comrade" and "laborer" more often than the conservative-friendly "volunteer."

The problem, Schlafly says, is the professors. Professors are overwhelmingly liberal and therefore have slanted the Bible in their direction. So avoiding those pesky scholars, the Conservative Bible Project is depending on their revision to be done wiki-style with contributions coming via the internet.

"The best of the public is better than a group of experts," said Schlafly, whose mother, Phyllis, is a longtime conservative activist known for her opposition to the Equal Rights Amendment.

(Timothy Paul Jones, a professor at the Southern Baptist Theological Seminary in Louisville, Ky., who calls himself a theological conservative) says the project is a misguided effort to read contemporary politics back into the text.

Dierdre Good at General Seminary looked at their Gospel of Mark and responded:

"No one thinks any translation is perfect. But does substituting "The Divine Guide" for the term "Spirit" in e.g. the baptism narrative convey Mark's ideas about Jesus' Baptism or the Spirit itself? And the translation of the verb in Mark 1:12 "the Divine Guide then led Jesus into the desert" is just wrong. I simply disagree that translations not using the term "man" to speak of Jesus emasculate him. Changing "scribes" or "Pharisees" to "intellectuals" in passages reporting controversies pits the latter against Jesus. Is this the message we want a bible translation to convey? Finally, the proposed translation of Mark 1:34b: 'he commanded the devils to be silent, because they knew Jesus as God' introduces a description of Jesus that simply isn't in the text."

Okay. So there are a few bugs. I mean, heck, translating the Bible is hard. And what do these Bible scholars know, anyway?

Well, they can cease their labors. Another Biblical non-scholar beat them to it. In 2006, Al Franken came up with this version of the story of Jesus, and it seems to meet all the requirements of the wiki-translation, except maybe for the "dumbing down" part. Presenting "The Gospel of Supply-Side Jesus."

Email ThisBlogThis!Share to TwitterShare to FacebookShare to Pinterest
Labels: For this we had a reformation?, Politics and Faith

It used to be that conservatives trusted experts and distrusted the democratic mass. They valued education. Instead, they now uphold a crazy ideology and have lost their sense of obligation to the culture....

This would be hilarious if it wasn't so sad - and true: people in Academia (Neo Platonist Academia from Ancient Alexandria) have been doing this constantly from the "Renaissance" of of Charle Magne. Aachen, Fulda, Oxford, Paris, Bologna, the 16th century "Renaissance", and so on... culminating after 1948 (the RSV) with "Dynamic Equivalence", which is precisely "thought for thought"... only it's the "thoughts" of the translators ;=)