Jesus is a fool 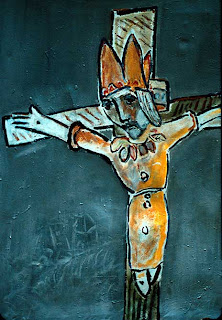 Maundy Thursday, 2010
April Fool’s Day is something of a high holy day in my household. Or at least it was when my kids lived at home. This was a day of reversals. When they were young, they started out with pranks like swapping the sugar in the bowl with salt, and the salt in the shaker with sugar. But as they grew older, they like to indulge in irony and the unexpected reversal. Like the time last year when Jamie called her mother and me in tears because of the awful haircut she gave herself and the terrible job the hairdresser did trying to fix it…not!

But when I noticed that April Fool’s Day this year corresponded with Maundy Thursday, I thought about cancelling the frivolous day, or at least postponing it. But then as I looked at the scriptures more closely and began to meditate on the what Jesus was doing in that upper room on that last supper before his crucifixion , I realized something important. Jesus is a fool.

By any sane standard of this world, Jesus is naïve and foolish. And his unexpected, foolish behavior highlights both what he is doing in the upper room and how God is at work in our lives.

All of Jesus’ friends and followers know that something is up. Something big. He has marched into Jerusalem, coming in not through the honored gate where Pilate would march in with his legions whenever he came up from Caesarea Philippi, but down from the Mount of Olives and in by way of the service entrance, the way of farmers, vendors and ordinary people. What kind of messiah underscores his humility? What kind of leader does he think he is? How foolish can you be?

He does not set up shop in some public place but makes forays to the temple, sometimes to teach, and once to overturn the tables and stalls of those who set up shop in the temple courtyard. He then retreats. Either to this upper room, as it is called, or to a garden in place called Gethsemane. Jesus is clearly not acting in the way a messiah should. Instead of embracing the temple, he tears it up and chases people away? What kind of a fool Is Jesus?

And then at the last supper, the same supper in the same upper room where Jesus breaks bread and pours out wine and says this bread and wine is his body and blood, he then gets on his knees and washes the disciples feet. This is not acting like a person who is in charge of the next revolution. What kind of messiah acts like a slave. This is sheer foolishness.

And after this, Jesus gives us a new commandment, one that will supersede even his great commandment: love one another as I have loved you.

Jesus is demonstrating that the way of God is the way of service. By washing the feet of his friends, he is showing them that God’s love is manifested in service that expects nothing in return. He talks about how God will be glorified and his moment of glory is near when Judas leaves the room to fetch the temple police.

Jesus apparently is not deterred by the stubbornness of his followers, or their thick headedness or their quarrelsomeness, or their demanding natures. He doesn’t get even when they slight him. He doesn’t make fun of their stupidity. He doesn’t sulk when ignored. He gets angry, sure, as we can see in the temple courtyard. He gets frustrated, yes, such as when his followers can’t seem to do the simplest task well. True, he despairs over the plight of his people, as he prays over Jerusalem. But he does not stay in that anger, he does not let his frustration define him. His despair motivates him and that despair is the gateway into deep compassion.

John makes a point in his Gospel of reminding us over and over again that Jesus and the Father are one, and that Jesus does the Father’s will and that everyone who does Jesus’ will does the Father’s will. And while his friends and apprentices are everything but faithful, Jesus does not return evil for evil. He does not give as good as he gets. Instead, Jesus breaks bread, pours out wine and washes feet. Jesus’ faithfulness is not a zero-sum game: he remains as faithful to us as he remains faithful to the Father.

The world’s way of dealing with dense or hopeless or bickering or betraying disciples is to cut them off, to punish, to teach them a lesson through pain. Jesus’ way is to feed, to embrace, to heal and to serve. Jesus chooses to teach a lesson through service.

Sound foolish? Not really. Jesus is being, as he taught elsewhere, wise and gentle all at once.

At the end of tonight’s Gospel, after he has washed his disciples feet, Jesus says that the time for God’s glory is here. The time for Jesus to be glorified is here. What the lectionary leaves out is what was read yesterday: that Jesus’ glorification begins when Judas goes out to turn Jesus into the authorities.

Because now Jesus begins, once and for all, to take on everything that separates us from God and each other and creation. In Jesus’ death, we are made alive.
But first, he washes the feet of his friends and apprentices. He shows us in this little act of service that Jesus has remained as faithful to us as he has remained faithful to God.

Just as Jesus taught this to his disciples, we must learn it again and again. The disciples did not get the import of Jesus’ lesson until they met him raised from the dead. We who know the end of the story, we have encountered the risen Christ in faith and in baptism, need to be reminded of this same lesson over and over again. We who have been rescued by Christ from sin despair--we who have found grounding and purpose in our faith, we who are now adopted into the community of Christ’s people and grafted into the vine of Christ--we are the ones who are reminded that the way to serve is to allow ourselves to be served. That we are not in it for us and what we can get out of it, but we follow Christ because Christ served us.

Isn’t it strange that we who know the end of the story, who know the empty tomb and the risen Christ, are still surprised and embarrassed by this ritual? I don’t know about you but of the two things that Jesus did in that upper room at that last supper, I am really glad it was the other thing that became the Sunday norm! Someone once said to me that it just feels weird to see another person’s feet! Precisely! The idea of stepping up and allowing someone to serve us does not seem to be the way of self-sufficient competence. It is to us embarrassing foolishness.

But if we are to serve and welcome the people whom God gives to us—the poor, the homeless, the sick, the outcast, the chronically ill and the physically and mentally challenged—then we must learn how to be served. We must allow ourselves to be taught where we are challenged, where we are poor, we must discover our hunger, and where we experience being outcast. The point of washing each other’s feet, is that we serve these folks not because they are different from us, but because they are just like us. It is only their circumstances that are different.

Jesus shows us in washing feet and going to the cross that the way of God’s salvation is through mercy.

Jesus shows us in washing feet and going to the cross that the way the messiah reigns is through compassion and companionship.

Jesus shows us in washing feet and going to the cross that the way to see Christ is to look into the eyes of the people God gives us and imagine ourselves stooping to wash their feet.

It’s no joke. Jesus’ foolishness is our salvation.
Posted by Andrew Gerns at 10:37 AM