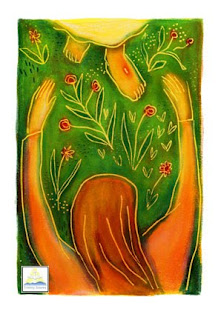 Until now this was the empty day.

This is the seventh day. The day, we are told in Genesis, when God rested after creating everything. But if you read the Passion Story, it seems as if everything God has planned for Creation and for we creatures has completely unraveled.

Last Sunday we celebrated Jesus entry into Jerusalem in triumph. He came in through the servant’s entrance; not in the front way with an impressive procession of flags and trumpets and military hardware like the Roman governor, but through the service entrance riding on a donkey adorned with cloaks and his way paved with palms to show off his humility. It looked like God’s plan was to set up a new regime. It looked as if God was preparing to throw the bums out. But as we saw last Sunday and all through this Holy Week, things would unravel quickly.

After challenging both the power of the government and kind of religion that divided people into levels of worthiness, Jesus is betrayed, arrested, mocked, beaten, paraded around as a mockery and then finally tortured and executed. What was supposed to be the beginning of a new era quickly unraveled into disarray and chaos.

Until now. Until this moment.

Now we have seen light gradually replace darkness. Now we have seen life arise out of death. What looked to us like a Seventh day of dead hopes and disillusionment has become a night of light What seemed like a wasteland of solitude is now an encounter with a creating, renewing, saving God. While we were sleeping, caught up in our loss, God has been healing creation.

The Apostle Paul says in his first letter to the Corinthians, that people are in Christ are a new creation. The old has passed away behold the new has come. What we thought was the worst day of darkness and despair it turns out was the last day of the Old Creation, Easter, the third day, is the first day of a brand new creation. And we are a part of it.

As some of you know, I like the image of Christ on a rescue mission. This is probably because I spent a big chunk of my life working with and hanging around people who rescue or heal people for a living. You know, the kind of people who run into burning building or falling down mines when everyone else is racing to get out, and the kind of people who stay with the sick and the dying when everyone else stays away. But I like the image for another reason.

We human being have dug for ourselves a mighty deep hole. Our selfishness threatens this planet. We find new and different ways to isolate ourselves more and more from each other. We have the tools to create peace and prosperity, and we find new ways to make war and violence instead. Instead of God simply being angry at us for messing up, God instead chooses to come, be among us, identify with us, go into the darkest places of our hearts, of our psyche and our memory and he lifts us out of the tomb and grave and brings us home.

We may not want to be rescued. Like a horse that might run into the fire when the stable is ablaze, we may go the wrong way. But through the cross and his death, he has finds us in the place that we fear the most.

The resurrection of Jesus shows us that not only is the cost of sin paid by God; but, much more than that, we have been given new life, a new way of being. As Paul said, when we were baptized, we joined with Christ in his death. In our baptisms everything that was dead in us was buried with him and now we live him.

So when the women come to the tomb and find it empty, the angel that greets them is not kidding when he asks “why do you look for the living among the dead?” The living one is Christ. He is alive. He has conquered the power of sin and death.

Little do the women know that they are also the living searching among the dead. Because of Jesus’ life, death and resurrection, they—and we—are among the living. Until that moment, this was a sad, empty seventh day. But because Jesus is alive, it is now the first day of a brand new creation, and we who have died and raised with Christ, are alive to God in Christ Jesus.
Posted by Andrew Gerns at 9:00 PM