We all need winnowing 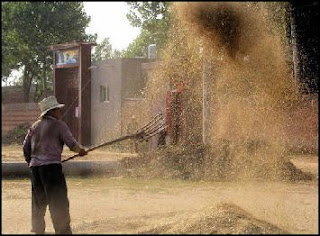 A burglar breaks into a dark house. As he creeps around filling his sack with valuables, he hears a voice. “God is watching.” He freezes, looks around, and hearing nothing, he continues towards the dining room silver. “God is watching” comes the voice out of the dark. He freezes again and then slowly turns around until the beam from his flashlight lands on a parrot. The parrot says “God is watching.” Below the parrot is a plaque with the name “God” engraved on it.

The burglar says “What kind of a person names a parrot God?”

The parrot says, “The same kind of person who names a Rottweiler .”

He comes out of the wilderness, a throw-back to the Old Testament prophet of old, and yet something quite new. His prophetic action—his object lesson to get across his point—is that for the people to live they need to change direction, they need to publicly renounce their sins and change direction. He was preaching that people need to turn towards God. More than that, their lives must show it.

rails against two religious parties who sent people to see John at work: Pharisees and Sadducees. The Pharisees were the modernizers, who wanted to bring Judaism relevant and accessible to Jews who lived in a Greek-Roman world. Sadducees were the lawyers and priests and temple officials of the traditional religion. Maybe they came to watch John Baptize and then comment on his preaching style and critique the content of his message. Maybe they came because he was doing something that they weren’t…getting people’s attention and enthusiasm. Maybe they wanted to move their religion from their heads to their hearts.

It’s not just right belief. It’s not just a changed heart. Belief and repentance must show up in renewed living. So John saves his harshest words for them—God’s judgment will begin with the most religious. Was he a madman? Or it is that we just don’t like to hear a word of judgment?

Actually many of us really enjoy a word of judgment—when it is directed at someone else! I will bet that a lot of common folks, a lot of everyday people at the Jordan River got a good laugh at John berating the High and Mighty. That feels good.

One reason that some people get so hyped up, riled up and wound up over other people’s private lives is that is much easier to look at other people’s sins, the need for other people’s repentance that it is for us to look at our own. If it wasn’t so, then we’d have nothing to read in the check-out line. The challenge comes when we have to look deep inside our own lives, take responsibility for our choices and change—really change. That’s a challenge.

Have you ever noticed that only two Gospels—Matthew and Luke—spend any time on the story of Jesus’ birth but all four talk about ? The early Christian Churches knew that Jesus’ and teaching grew directly out of John’s. While only Luke says that John and Jesus are cousins, all four Gospels go out of their way to show that both John and Jesus are very close in their teaching and preaching. Both John and Jesus start with “Repent! The kingdom of God is at hand.” They both believe that God’s reign has already started right here, right now.

But there are differences. Jesus is building on John’s . In Matthew, we hear John say that his baptism only cleans from the outside; Jesus’ baptism will clean from within. Jesus goes a step further than John: while John baptizes people who confess their sins, Jesus will eat with sinners and heal them and hang out with all kinds of people. Jesus not only talks about their sins, but he draws out and draws upon their faith—even when they can’t see it in themselves.

We have to be careful not to make too cuddly or too domesticated. He is telling us…you and me…that when we give our lives to God, we are going to change. He is not afraid to use hard language to go deep into . Notice that he uses imagery for Jesus that today, in our popular culture, we usually reserve to the devil. He is not saying Jesus is evil. Far from it, he is saying that Jesus will go into deep places in our souls, psyche and relationships that we are often afraid to go into alone.

We often picture the devil holding a pitchfork; but picture Jesus holding one—using his threshing to sweep grain into the air, where the wind carries away the useless, lightweight chaff and allowing the heavier, substantial grain to fall back to earth. The bad stuff gets blown away, and the good fruit falls back to earth.

And we frequently picture the devil standing around fire; but in Matthew, says that Jesus will use fire, the Holy Spirit, to burn away impurities.

We are both wheat and chaff. We are always in need of winnowing. Our cleansing is more than having being dipped or washed the water of baptism; it is also being tossed in the air and letting “Holy Wind” blow away the worthless stuff. Heaven's rule has come -- and we are still waiting for its arrival. We have been baptized, cleansed, winnowed, sorted but the process is not once and done. It goes on our whole lives.

We know that some early Christians, Andrew the Apostle for one, were at first followers of . Fr. John P. Meier, a Catholic New Testament scholar, thinks that John was Jesus’ mentor and teacher. I don’t know about that, but the idea intrigues and comforts me. It gives me some hope and guidance too. This tells me that can both survive and thrive through the sorting and winnowing our lives; that we can learn and grow and change. We cannot expect to do our own winnowing, our own sorting, our own cleansing. We might want to do it alone, but we need each other. We need each others’ prayer and support. We need sacramental community. We need companionship and holy friendship--the kind of companionship that listens through our pain and tells us the truth when we both need it and are ready for it. We need teaching and we need examples. Christian community is the forum, the home, for us to grow and become the people God made us to be.

No one likes to hear a word of judgment. When we creep around the dark places of our lives, the last thing we want to hear is that “God is watching.” But God does more than watch…God acts to change us. God is with us in Jesus Christ. His life, death and resurrection has made is so we can live a new life with God. The Holy Spirit teaches us. And now, God sends us people to teach and warn and mentor us. We have that gift of the Holy Spirit to renew us, burn and blow away the stuff that hinders us and weighs us down. We are being winnowed and sorted and together we are finding this new way of life a life-long, life-changing process.

Thanks for this, Andrew.
I don't think there's much risk of making "John the Baptist too cuddly or too domesticated." The guy defies domestication!
I'd never heard what you said about John being Jesus' teacher/mentor. Much to ponder there.
I appreciate what you say about our continuing need for winnowing.

Hi, Lisa. I got the same question in coffee hour and at the red doors after church. Maybe I should have said something about not reducing him to a "stained glass" or idealized image. I was trying to get at the number of folks who've told me that John the Baptist is their favorite saint or NT character or something but don't really go very deep about what he is about. I wonder if he is, in the minds of some, the eccentric uncle of the NT. Also, the Gospels go to such uniform lengths to reduce John's status to that of precursor that we forget that his followers constituted a movement in their own right...one that we don't know a whole lot about.

Ah ... I think I understand better now. Thank you.

I am intrigued by the John the Baptist character. He's totally "out there"! And he should shake up our gravity.

I agree with you about how some folks walk past him as "merely a precursor."

In fact, he's quite radical and preaches a message that should draw us up short.