The dark side of Christmas 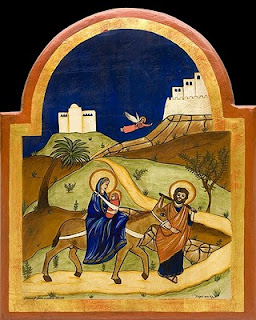 As we wind up Christmas this week, we are reminded that the world Jesus was born into is dangerous and unpredictable world. Jesus’ mere appearance, even as a helpless infant, reveals the a conflict between good and evil and the lengths God goes to both defeat evil and rescue us from sin. It sounds strange to us but In this conflict, where light and dark collide, Jesus is a displaced person. He is a refugee.

According to Matthew’s Gospel, as soon as news of this newborn “king of the Jews” reaches Herod, the Roman appointed King over Judea and Palestine; he does whatever he can to kill off the competition. He tries to trick the Magi into disclosing Jesus’ location so—he says—he can pay him “homage.” In fact, Herod wants to kill the regent king. When the Magi are warned in dreams to go home another way, Herod orders that all the infant boys 2 years old and younger be killed to be sure that this king will never grow up.

But Joseph is warned by an angel in a dream to flee to Egypt. Like Moses being launched in a basket to avoid the massacre of Jewish babies by Pharaoh a thousand years before Jesus, God intervenes—with the help of caring, faithful people to save Jesus. In Moses case, Moses' sister makes sure Moses is found by Pharaoh’s wife. For Jesus, Joseph rescues Mary and Jesus by fleeing to Egypt. But the way that God will rescue us from the depth of human sin and evil, the exodus from death to life, from sin into righteousness will be through the cross and resurrection.

We don’t know if the massacre of the innocents really took place. The only record of the event is here in Matthew. But we do know that Herod routinely killed off his opponents, even his own sons, to preserve his seat of power. He planned to do the same at his own death, we are told, kill off dozens of people in dozens household so all of Judea will have reason to mourn.

The fact is that human history is filled with just this kind of cruelty. It was only a decade ago that we watched in horror as genocide on the most cruel scale took place in Rwanda. We remember the killing fields of Cambodia. And we remember the holocaust and we enter into a new series of anniversaries of our own civil war, the list goes on and on and on. The roster of human atrocity is almost too long to recite. The Gospel reminds us that Christ is born into this kind of world. It is into this kind of world that God intervenes.

As I have said, the temptation to fight evil with evil is very strong. It’s natural to us. And people will use the tools of evil--violence, aggression, hatred--to get their way and then tell us they do it for God. The popular media in America portrays Islam as driven by these forces—and certainly the attacks against Christians in Egypt, Nigeria, Pakistan and the Philippines seem to bear this out. But the other day, I learned that no one has a monopoly on this market when someone sent me a video of some Christian “warriors” executing a plastic Santa by firing squad—I am not making this up--to make the point that they want us to keep Christ in Christmas, or else! These people—these Christians—said it was a joke and all good, clean fun, but I found the whole idea pretty chilling. So what Matthew tells us about Herod’s massacre is telling us the truth about how things are.

Herod represents the dark side of the gospel. He reminds us that Jesus didn't enter a world of sparkly Christmas cards or a world of warm spiritual sentiment. Jesus enters a world of real pain, of serious dysfunction, a world of brokenness and political oppression. Jesus was born an outcast, a homeless person, a refugee, and finally he becomes a victim to the powers that be. Jesus is the perfect savior for outcasts, refugees, and nobodies. That's how the church is described in scripture time and time again - not as the best and the brightest - but those who in their weakness become a sign for the world of the wisdom and power of God.

Our epistle today picks up on this: Ephesians 1:3-14 is one long sentence, a blessing to the readers of the letter, reminding us that because of what God has done in Jesus Christ we have been adopted and made holy and part and parcel of God’s new reign. Not because of anything we’ve done but because of what Christ has done. The work of this rescued, refugee infant will rescue us from our sin, our brokenness, our fear and make us into a new people.

The Rev. Dr. King once wrote about the lengths that God has gone to restore us to proper relationship with God. He says that the Christ’s incarnation is a real, practical confrontation with evil but one that does not resort to evil to overcome it. He says that the cross, in particular, is:

"...the eternal expression of the length to which God will go in order to restore broken community. The resurrection is the symbol of God's triumph over all the forces that seek to block community. The Holy Spirit is the continuing community creating reality that moves through history. He who works against community is working against the whole of creation."

Last week, I finally got to see Harry Potter and the Deathly Hallows, Part I. I read the book back when it came out a few years ago and a few times since, so I was eager to see how the movie handled the story. I am convinced that those Christians who condemn the Harry Potter books because of the magical story line have it all wrong because I think J.K. Rowling has written a profoundly Christian story, just not in the overtly evangelical and allegorical way of and his Narnia books or his space trilogy. (I think she is more in the tradition of Charles …but few people have heard of him.) Rowling has created a world where ordinary people have power, and the forces they must contend with are at once practical and spiritual. Harry is the “boy who lives” because love stands up to and finally destroys evil. He lived because his parents love stood between him and evil. He becomes a strong wizard because he learns to love others. He gives his life for his community and his friends. He discovers that to live is to embrace all of life including death, while it is evil that attempts to control life because it fears death.

We live in a dangerous, unpredictable world. Christmas reminds us that the struggle between light and dark, death and life, fear and faith takes place in the everyday places where ordinary people choose love, dignity, hope and community instead of choosing to circle the wagons in fear. Christmas reminds us that God is with us every step of the way. Our God comes to us as a refugee who will go to the cross, but in that very journey God rescues from death and gives us the power to embrace life.