Communion does matter.
The Covenant is not the same as Communion. 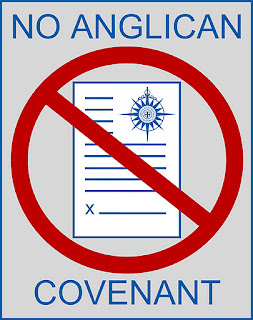 (Dr. Williams writes:) "This is why the Communion matters – why it matters for a bishop in Jerusalem facing the withdrawal of a residency permit...a congregation in Nigeria facing more interreligious violence, an island in the Pacific facing inundation because of climate change, an urban community in Britain wondering how to respond to rising social disorder as poverty and unemployment increase. The Communion is a gift not a problem to all such people and many more. Only in such a mutually supportive family, glorifying and praising God in Christ together, can we truly make known the one Christ."
The Archbishop's letter acknowledged the "numerous tensions" in the Communion, but cautioned Communion members never to say "I have no need of you" to anyone seeking to serve Jesus Christ. He also used the letter to appeal for "more careful and dispassionate discussion" on such issues as the powers of Primates' Meetings as well calling for "a sustained willingness on the part of all Provinces to understand the different ways in which each local part of the Anglican family organizes its life."
Dr Williams also commended the Anglican Communion Covenant "as strongly as I can" stressing that it would neither change the structure of the Communion nor give "some sort of absolute power of ‘excommunication’ to some undemocratic or unrepresentative body."
"It outlines a procedure, such as we urgently need, for attempting reconciliation and for indicating the sorts of consequences that might result from a failure to be fully reconciled," he said. "It alters no Province’s constitution, as it has no canonical force independent of the life of the Provinces. It does not create some unaccountable and remote new authority but seeks to identify a representative group that might exercise a crucial advisory function."
He said the fact that the moratoria were being "increasingly ignored" was deepening mistrust "which is bad for our mission together as Anglicans, and alongside other Christians as well. The question remains: if the moratoria are ignored and the Covenant suspected, what are the means by which we maintain some theological coherence as a Communion and some personal respect and understanding as a fellowship of people seeking to serve Christ?"

The Archbishop is right in telling us that Communion is important. It is essential that Anglicans around the world work together on these and other important questions. We need to do more to encourage common mission and the proclamation of the Gospel of Jesus Christ that we all share.
Communion is a gift. The problem is not the Communion. The problem is the Covenant.

Put another way, would the voice of Anglicanism be any stronger in Zimbabwe and would it influence Mugabe any more if they had the Covenant in their back pockets? Would having the Covenant stop Polynesian islands from being any more submerged and would the urban parish be any more relevant to it's neighborhood with a fully empowered Anglican Covenant?
Once more he talks about how we must not focus on the things that divide us, while extolling a document that defines itself in terms of division, rather than reconciliation. He says we need this to make room for everyone. Dr. Williams asks for an alternative to the mechanisms outlined in Part IV. He says that no one has offered an alternative. While this point is in itself debatable, allow me instead to make a my own humble suggestion:
Instead of spending time (as Section Four posits) on throwing each other out when we disagree, how about building a communion that encourages dialogue and reconciliation?
Instead of focusing on eliminating conflict by making sure that no innovation can happen without the approval of the most conservative member of the Anglican Communion, how about creating a structure and processes that encourage members of Churches who see the implications of the Gospel differently to come together, listen to one another, pray together, share experiences of mission together, and break Eucharistic bread together?
The Covenant diminishes the Communion because it assumes that Communion only happens when we agree. The truth is that Communion is happening because we share Christ. It is a gift of the Holy Spirit that is made possible by death and resurrection of Christ. Communion is because we share the same Lord, the same faith, the same baptism. A Covenant that does not help us do the hard work of living that out--that helps us pray together--despite our disagreements is not a Covenant worth having.

The confusion of the Covenant with the Communion leads inevitably to the depiction of Covenant opponents as being in some way anti-Communion. I think Lambeth Palace can't grasp how principled opposition to the Covenant can be a pro-Communion stance.

Communion, like unity, is a gift which must be received; it can't be confected by a strong-arm document.