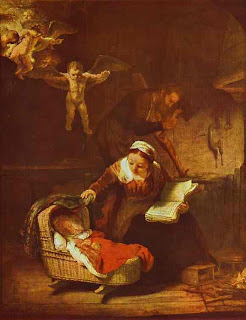 Today is a good day for a baptism.  It is the first day of a brand-new year…and what better way to start?  The weather is unseasonably warm. But the best reason that today is a great day for a baptism is that this is the Feast of the Holy Name—a feast that our Prayer Book assigns as being as at least as important as Christmas and Ascension. Our Prayer Book reminds us, in its usual understated way, that there are moments of Jesus’ life where we need to stop, look, and listen. Next week will be another one.

Jesus being taken to the synagogue by his parents to be circumcised and named is not so different than Benjamin’s being brought here this morning. So let’s take a minute to compare and contrast the nativity stories of Benjamin and Jesus.

Benjamin is a much anticipated child—not only his family but this whole parish community has been pulling for him. Jesus was also a child people were waiting for with bated breath.

Alex and Caswell had to trek a long way—several times –to Philadelphia help him be born safe and healthy. Their journey reminds me of Mary and Joseph’s journey from their hometown to that other Bethlehem.

The Cookes experienced birth and those first days and weeks of Benjamin’s life in a strange environment, not one filled with animals and straw, but one filled with high tech equipment and specialists, nurses and doctors.

Both sets of parents knew about worry and danger—the Cooke’s from the need for major surgery on such a tiny patient, and, according to Matthew, Jesus’ parents had to flee the wrath of a fear-filled, vengeful king.

And don’t forget: Jesus had angels but Benjamin had Grace.

So what you are doing today points us to what happened to Jesus and what God is doing for us.

After the angels sang their songs and the shepherds left, the parents of Jesus gathered up their baby and took him to a local synagogue to have him circumcised and formally named. After your long journey, you have gathered up your family and come here to have him baptized.

On this day, Jesus, with his circumcision, was formally incorporated into the community of God’s Covenant people and given a name.

Today, Benjamin will, through his baptism, be fully initiated into the life of the Church. This is not just the dedication of a baby, nor a thanksgiving for a safe delivery and successful surgeries—although we do thank God for those things—what we do today is the Christian version of what happened to Jesus a week or so after his birth: he is being made a full member of God’s covenant people and will be marked as Christ’s own forever.

Something else that happened to Jesus that day: he was formally given his name. Names in Hebrew culture were important. They described a person’s identity and more. Names described a person’s personality and destiny.   In a few moments I will ask you to name your child. It is not as if, up until now, Benjamin has been a nothing or a number, called something like Cooke Boy #1 or Baby #2. Instead, this naming tells us something about what we think God has in store for us.

Both Jesus and Benjamin were given biblical names. By which I means straight out of the Hebrew scriptures.

Benjamin means son of right or son of righteousness. The first Benjamin was given that name by Rachel because she wanted a son and spent a long time praying and fasting. Also, in this case the parents were very old and, but Jacob and Rachel had a very crooked, rocky relationship with God that had become very intimate. So for Jacob and Rachel a baby boy was an answer to prayer. Both the biblical Benjamin and ours share something: they are both the answer to many, many prayers.

His name, “son of righteousness,” reminds the Cookes, Benjamin and us that faithfulness is always rewarded even if the path is crooked and not very obvious.

Mary and Joseph could not send out e-vites but maybe they gathered their relatives and some friends when they went to the local synagogue for the circumcision and naming of their new baby. Notice that until this little sentence in Luke, the baby is only referred to in the Gospel as “the child.” Now he has a name: Jesus.

Actually, they probably called him “Joshua” or more likely “Yeshua.” Our memory of Jesus’ name comes to us through so many cultures over so much time that a little change is to be expected.  Take a Hebrew name, speak it in Aramaic, record it in Greek and remember it in Latin and you will get “Jesus.” That’s what we call the Son of God. But through all those iterations, his name still speaks to us, right down to our very core.

The name Mary and Joseph gave their baby, in obedience to God’s angelic instruction, was “Joshua,” after the great patriarch, the one who took up Moses’ mantle and brought the people of Israel across the Jordan River into the Promised Land.  Joshua finished the job that Moses’ started but could not complete. Joshua finished the journey of the Exodus and brought the people home after their long desert journey from slavery through exile, testing and into the Land of Promise.

“Joshua,” or “Yeshua” means “Yahweh, God, is salvation.” Or simply “God saves.” Jesus’ name reminds us of the saving activity of God in ages past, helps us look to the saving acts which will in years to come (long after his circumcision and naming) occur on Golgotha and in an empty tomb. Jesus names helps us look to the present to see what God is doing today and forward to where God is taking us.

I have to say that you two have really great tastes in names. Not only do they sound nice, rolling off the tongue, they will never cause their teachers to stumble whilst calling out attendance. Best of all  your kids names communicate! Their names tell us something about what God is up to in your lives and what you hope will unfold for them as they grow up.

In their baptisms, in the little Christian community you call home, in the parish and in daily life, you will be teaching your children about the power, presence and faithfulness of God. In your parenting, you will show them that Christians are real people capable of profound wisdom, amazing thick-headedness, deep love and great silliness. In your example of faithfulness and ethical living and in lessons of prayer, scripture, worship and good works, you will teach them that having taken the plunge of baptism they are always immersed in God’s love, power and purpose.

“Grace” is not a biblical name in the sense that it is named after a person so much as it is a biblical name that points us to the fact that God’s love happens. Grace means “free gift.” But more than that, “grace” reminds us God prepares our hearts to love God, “grace” means that God gives us what we need for the journey, and “grace” is that God’s love comes to us whether we deserve it or not. It just is.

So yours is a household that will, for all the riot and unexpectedness that raising children brings, is also a house that by their very names teach us that God’s loves happens no matter what (Grace) and that faith is always rewarded (Benjamin).

In choosing this day to baptize Benjamin and welcome him into the family of God’s people, you have linked him in a special way to Jesus’ own naming and initiation. You remind us—and I hope you will remind Benjamin as soon as he is old enough to hear the story—that he is who he is, and he will do what he will do because God does what God does. Grace happens. Faith and righteousness prevail. God saves.


The Feast of the Holy Name and the baptism of Benjamin Caswell Cooke, January 1, 2012 at Trinity Episcopal Church, Easton, Pennsylvania Luke 2:15-21

Email ThisBlogThis!Share to TwitterShare to FacebookShare to Pinterest
Labels: Being a friend and apprentice of Jesus Christ, Sermons, Theology, Worship