Fish stories and other Gospel tales

A sermon for Evensong on Wednesday, July 22, 2015 at RSCMA King's College Course at St. Stephen's Pro-Cathedral in Wilkes Barre, PA.

Updated. You know what a fish story is, right? Sure it's a story told by people who fish. But a lot goes into a good fish story. A good fish story has to be a little, well, tall (that fish was this big!…or maybe this big!). It has to be a little outlandish (like the time I once shot a bear in my pajamas…and what the bear was doing in my pajamas, I’ll never know). Above all, a good fish story has to be well told… and it does not really matter if the fish in the story got away or was caught.
Like the time my dad caught a bass with a canoe. You mean “in a canoe,” right? No, with a canoe. “You can’t catch a bass with a canoe!” you say.
Well, my dad did.
My brother and sister-in-law share a place on a lake in Vermont which is owned by her extended family, and is called “Camp.” Once they invited my parents to come to Camp for a week, and during their stay my dad and my brother got in the canoe to go fishing. It is one of those long 10 foot aluminum jobbers with wood slats for a floor. And they were fishing off the point where the Camp is located.
Pop snagged a small mouth bass. And it was beaut, lemme tell ya! And what a fighter!
So Pop is reeling in this bass and the fish is going this way and that, and down to bottom and up out of the water. Pop shouts for David to bring him the net. So my six foot five inch brother, who was sitting in the stern, stands up and reaches Pop, who is up in the bow, the net. Well, you know the one you’re never supposed to do in a canoe, right? That’s right! Stand up! And so the canoe rocks this way, and then that way. And Pop is shouting for the net while reeling in this bass and my brother is saying “Here it is!” But his foot gets stuck in the slats and he can’t move and as he tries to free his foot to give Pop the canoe turns over. Now the canoe didn’t just tip, it rolled over, 360 degrees. Out into the water David goes. All the gear and the paddles are floating all around the canoe.
But not Pop!
He hung on and there he was, sitting in the bow, looking dazed, wet, and grumpy.
Of course, all this commotion got the attention of everyone on shore. And we run out to edge of the lake to see David swimming towards Camp towing the canoe—which is now a ten foot floating bathtub—with my Dad sitting in the bow. And when they came ashore, everyone was making a fuss. “Are you okay? What happened?”
Now my Pop, was a Deacon of the Church and man of great dignity. And in the midst of all the chaos, he uttered these immortal words: “Forget about me. Net the fish!”
Because swimming around inside the canoe was a good sized small-mouth bass.
And that is how my dad caught a fish with a canoe.

The Bible is full of fish stories. And perhaps the fishiest of them all is the story of Jonah and the whale. Okay. It wasn’t a whale. He was swallowed by a big fish.
Hearing that story again tonight, I wonder. If people have fish stories, I wonder if fish have people stories?
I can imagine a big fish one day talking to his buddies. Let’s call the fish Ichthys. That sounds like a good name, doesn't it? So Ichthys says “I remember the time I caught a man.
“There I was swimming along, and it must have been stormy up there because I see the bottom of this boat going up and down and all these boxes and crates and ropes and things are sinking to the bottom. And while I’m swimming along this man appears right in front of me, and before I knew it “gulp!” I swallowed him!”
“Eww!” his friends say. “Yuch! What did he taste like?”
“Well, not so good,” Icthys says. “And I have to say he didn’t sit well in my digestion. It moved around and fussed a lot in my stomach. (“Eewwww!”) And noisy! I mean not only did my stomach growl but from inside I could hear him…’Oh, God!’  and ‘I’m sorry! I should have gone to Nineveh instead of Tarshish!” I mean it was non-stop whine, whine, whine!”
“What did you do?”
“So this goes on for three whole days and I finally had enough, so I coughed him up on some beach.”
Alright. So maybe the story of Jonah is a fish story, and we don't really know what the big fish thought of all this. But just because it’s not history doesn’t make it untrue.
Think about it. How often have you been called by God to do one thing, to be one way, and decided to do the opposite?
And how many times have you been busted and found yourself over your head because of the consequences of your choices … with no way out?
And when you’ve been over your head with no way out…have you ever experienced the most amazing, unexpected, and out-of-the-blue rescue possible?
You see Jonah’s story is not just a fish story. It is the story of God saving Jonah because God had something bigger in mind for him that Jonah himself could imagine.
The Bible is full of fish stories. There is the time Jesus called the disciples who were fishermen and told them they’d be fishing for people! And the time that Jesus calmed the storm from his boat. Or the time he walked on the water and invited Peter to do the same. When Mary Magdalene, whose feast day this is today, ran and told the disciples that she had seen and talked to the Crucified Jesus, raised from the dead, the apostles probably thought that was a fish story too. And it was...just not in the way they expected!
And there was the time, like in tonight’s Gospel, that the Crucified and Risen Jesus showed his friends that life, after meeting the Risen Christ, would never be the same again. They thought that life would go back to normal, but they are catching nothing until they listen to Jesus, put their nets over the other side, and then they have more fish than they can handle. Meeting the Risen Christ is one thing. Doing what he says is something else.
Even Jesus’ disciples had to be reminded that God had bigger things in mind than they could possibly imagine.
Which is why there are lots of fish stories in the Bible and why the most important ones may be closer to home than you think.
I have one more fish story for you. When I was a new priest in my second church, my parish had the habit of sometimes using real, baked bread for communion, but other times we’d use wafers. You know what I mean, the little round ones about the size of a quarter. And not the whole wheat ones. These were the white, very thin ones, with next to no taste. You know what I mean, right? These were the ones that manage to dissolve in wine if you intinct but stick to the roof of your mouth if you don’t.
So before service one Sunday, one of the young people who was to be an acolyte asked me what kind of bread we would be using for the Eucharist that Sunday, because how we handled the fresh baked bread was a little different that how we handled the wafers. I said “wafers.”
He pulled a face and left the room. I overheard him report back to compadres, “It’s fish food!”
I never heard of communion wafer referred to that way…and clearly, they preferred the “real” bread to the wafers. But I had to laugh! What a great image! Communion as fish food! Imagine: we are fish being fed. 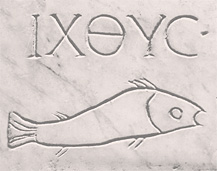 The earliest Christians used the sign of the fish as a secret symbol to identify themselves to each other. And the Greek word for fish “Ichthys” became an anagram that the early Christians used, too. In Greek the letters that make up that word for fish (Iota, Chi, Theta, Upsilon, and Sigma) were the first letters of the phrase: Jesus Christ, Son of God, Savior.
We have been caught for God by Jesus and at the same time we are called to fish for people. We have been deposited on the shore for God’s work. We are fed with the “fish” food of Christ’s body and blood while at the same time we are called to feed and serve the lonely, the friendless, the needy, with God’s food of love, mercy, hope, cheerfulness, and compassion in what we do and how we are every day. When you find hungry people and feed them, or meet people outcast by society (or the church) and welcome them in the God’s family, when you bring comfort to people who are hurting, when you care for God’s creation, when you beauty and hope to where there had been desolation and fear, you are like the fishing apostles who gather God’s people to him.
In all these ways, as you live out your baptisms, you will discover over and over again that Jesus is calling you to be a miraculous messenger of grace, love, and hope. A person who shares the Good News of the Risen Christ, and shares in the renewal of God’s people and creation.
There are a lot of fish stories in the Bible. But the biggest and best fish story there ever will be is the one you live right now as you learn and do the work of Jesus.

Email ThisBlogThis!Share to TwitterShare to FacebookShare to Pinterest
Labels: Being a friend and apprentice of Jesus Christ, Evangelism, Fun Stuff, Mission, Saints, Sermons