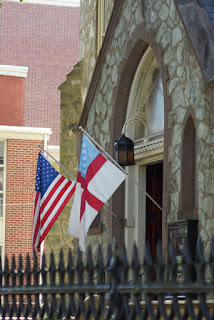 A recent article in Time by Mark Oppenheimer reminded me of a conversation that I have from time to time with folks about our taxes and the Church.

One interaction took place about a year or so ago, when a neighbor started parking his car overnight and for much of the day in our church lot. It probably seemed okay to him…like many centers of small cities, parking is a constant problem…and our lot was empty most nights. But we rent space to people who work downtown during the week and we kept coming up a space or two short especially in the mornings. People who paid rent for a space or who work in our church or volunteer for activities at church were growing frustrated.

Like the Sesame Street song, we set about finding out which car was different. When we figured it out and tracked down the owner,  I explained our situation and asked him to refrain from using our spaces. (This was one of those “they didn’t teach this in seminary moments,” for sure!)

He said that he did not know we rented spaces. I pointed to the sign that said just that. He said that he’d like to rent a space. I said, sure, but there’s a waiting list. Still, I was sure we could work something out. When he asked how much our rate was, I told him. He was aghast!

Never mind that our rate was 35% of what our city charges for a monthly on-street permit, and 50% of what other area property owners charge downtown workers to park in their spaces. He was still aghast.

“What kind of a church are you to charge this much for parking?” he sputtered.

“Well, we’re the kind of church who has to pay taxes, insurance, maintenance, and staff time to have a parking lot, that’s what.”

Less apparently aghast, but still not mollified, he said “Taxes? You pay taxes?” Clearly, he didn't believe me.

Yes, I sighed. We may be a tax-exempt, non-profit organization, but we still pay taxes. We pay property tax to the city and county for this very parking lot. We pay business privilege tax. We pay all the employee taxes and benefits that we are supposed to. And we pay fees in lieu of taxes that is tacked on to our water bill just like other local, private, non-profit, tax-exempt  groups in our town.

Besides, we return to our community a whole host of goods and services that make our city a better place to live and work, while saving local, county, state, and federal government both the direct and indirect costs of providing those services—assuming that they would provide them at all.

Which leads me to the basic argument in Oppenheimer’s post: that charities take from the community far more than they put back in. It is an old argument...one that goes back decades. He cites a study that shows all of the potential tax revenue that is lost to all levels of government through the charitable tax-exemption. The author lives in the city of New Haven, Connecticut, and he points to the exemption that benefits Yale University, with its large endowment, as a net cost to his city.

I suppose that chart could just as well be read another way. It is just as much an indicator of how much value tax-exempt non-profits add to their communities. Are there trade-offs? Of course! But these are trade-offs that the communities themselves have chosen to make.

Besides the fact that I will bet that between the hospital and the University, Yale is probably one of the biggest employers in the area and adds to the economy in all kinds of ways, the tax rules governing charities and charitable giving create a kind of market place that at once serves a civic purpose and is in keeping with our democratic traditions.

Tax exemption is a way for the government to promote worthy social ends without running or "owning" the project. Non-profit arts groups, charities for children and youth, senior centers, educational programs (both private and public schools/colleges, after school programs, church and non-church charitable day schools and nursery schools), housing, non-profit healthcare, and more all reflect worthy society aims. The system allows society to promote civic and social values of ethics, artistic expression, mercy, scholarship, and spirituality in a way that is at once democratic and market-based, because it is the donor who gets to choose which cause to support.

Tax exemptions for religious institutions, in addition to the charitable and NGO work they do, in and of themselves provide a worthy social aim. Many times religious and non-profit charities will go places and do things that government won’t or cannot do. And they will stick with the task longer, with closer ties to the local community, than government can. When Katrina hit New Orleans in 2005, the whole array of emergency response was activated. Now, ten years later, it is the charitable community, many of them religiously based, who are still on the ground doing the long-term work of recovery and redevelopment.

In our country, we have found that the best way to promote this general good without establishing a religion… or banning religion (which would be, after all, a form of religious establishment)… is to treat every religious group (no matter what their flavor...including the non-theistic ones) as a voluntary society and to give them the same tax-exemption that is given to schools, arts groups, health care, and other charities.

Our congregation gives back to the community as an essential and basic part of our mission. So, in addition to the religious instruction, pastoral care, and worship, which is at the core of our work, we do much that aids the community we live in. Our own parish hosts a weekly soup kitchen that feeds between 65 and 75 people a week. The Soup Kitchen is the base for other work: periodic health screenings from an area non-profit university who send nursing students and physician assistants to run the program. We practically donate our space when it serves as a public polling place because the donation that the county offers is well under what other groups collect and pay us. And that’s okay. Because we see it as part of our mission to the community.

Oppenheimer was not just picking on churches in his essay. His thesis is that there should be no tax-exemption for any non-profit institution. He cites The Church of Scientology or the tension between Yale University and New Haven as examples as to why charitable tax exemption do not work. But these examples really point to problems of management and town-gown relationships. For every corrupt or incompetent religious group or non-profit you show me, I can point to a corrupt or incompetent government agency or private sector company. This kind of argument gets us no where. Bad management and corrupt practices needs to be addressed for what they are: incompetence and dishonesty. If you can't prosecute them for their dishonesty, at least monitor them for their effectiveness. And if they won't be monitored or can't be prosecuted and you don't like how they use their money, then don't give to them.

First, a portion of money that people give to charities would go, right off the top, to the government in the form of taxes. More than just a cost of doing business, charities would have to treat their donations the same way that businesses deal with receipts, sales, and interest income. In the non-profit world, the majority of donors are small donors. The most money comes from a few large donors, but the vast majority of the people who send money to charities are small donors. This means that people, who have already paid taxes once on their income, get to see another portion of that money go off as taxes.

Most of all, what would disappear is the kind of charitable marketplace that the tax-code now encourages. Right now, people voluntarily choose to support the charitable work that appeals to them. People choose to support the charity or special cause that appeals to them. Sometimes that can go viral where everyone is jumping on board, as with last years ALS Ice Bucket Challenge, but most of all that shows up with the average donor chooses to tithe to their church or give to their alma mater or give to a local hospital or orchestra. Philanthropists have the freedom to support their favorite charity with their big ticket gifts but more often it is the small giver who chooses to support a tangible public good with a voluntary gift.

What would be the alternative if this were to go away? Well, before there was an income tax, especially in the late 19th century Andrew Carnegie went around the country building libraries, schools, and, yes, even churches. Voluntary societies abounded. But government did less and taxation worked differently in those days. Under the current tax structure, the loss of the charitable deduction and tax-exemption for charities would at worst kill off the charitable sector but most likely shrink that marketplace dramatically.

And this isn't just any marketplace! It is a marketplace of social concern, of civic participation, and social good. It is made possible, in part, by the way we exempt charitable work and the donations that support them. This frees up the capital (yes, capital) to do the necessary charitable work (including religious, artistic, and academic work) that our society claims to value but which is not part of the job of government.

Tax-code or not, charities and charitable giving provides to the public basic social benefits where people vote with their time, their dollars, and their energy. Protecting donations to charities from excessive taxation and encouraging donors to give promotes a marketplace where social good is provided on all kinds of levels with a minimum of government interference. And in a free society, it allows people to choose their level of participation and what social good they will support through their giving.
Posted by Andrew Gerns at 9:57 AM