On fig trees and holy ground 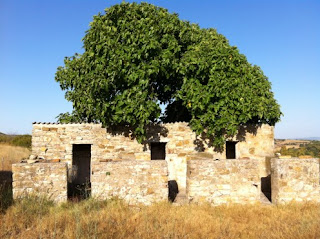 In today’s Gospel, Luke tells us about some people who ran up to Jesus to tell him about some Galileans who were not only executed by Pilate, but how their was blood with his sacrifices. Jesus verbalizes what’s on their minds: "Do you think that because these Galileans suffered in this way they were worse sinners than all other Galileans?"
It’s a common misconception. Take today’s Epistle. Please! It contains one of the most misused passages in all the New Testament: that God never tests us more than we can handle. But saying to a suffering person that “God never gives us more than we can handle” backfires in three ways: first because it teaches that bad things only happen to bad people; second, it says that if we are feel as if we are buckling under the weight of grief or pain, that we somehow morally and spiritually deficient; and third, it teaches us that God deliberately does horrendous things, or willfully looks the other way, because God loves us.
In short, it teaches us to hate God.
My saying that the suffering somehow deserve their fate has the dubious virtue of putting you, the hurting person, out of my misery. It builds a comfortable distance between me and the pain of the moment. It preserves the illusion of control when things are clearly out of control.
But Jesus doesn’t go there when people ran up to tell him all the bad news. Were those Galileans sinners because they were executed by Pilate? "No," he tells the crowd, "but unless you repent, you will all perish as they did."
Or when the tower of Siloam fell and eighteen people were killed, crushed because they stood in the wrong place at the time, is that because they were sinners? Jesus says no.
There was another time when some people asked Jesus about a man born blind. “Rabbi,” they asked. “Who sinned, this man or his parents?” “Neither.” says Jesus, and when he cures the man of his blindness, Jesus denies a correlation between the man’s problem and someone’s sin.
So does God a big ledger and, like Santa Claus, does he keep track of who’s been naughty or nice and decide to send his elves, er, angels!, to send earthly punishments or rewards? The answer is no.
Does God allow tyrants to kill people or tsunamis to drown people because they’ve done something to deserve it? No.
Does God send illness or catastrophe as object lessons in behaving well? Jesus says “no.”
Jesus says, there is no connection between the suffering and the sin, and yet the death rate for all humanity is still 100%, that is enough for Jesus to urge us to line up our lives with God.
Underneath the rationalizations there is terror. If I had a nickel for everyone I’ve heard tell a grieving person God needed a deceased loved one more than we do, then I’d have a Brinks truck for a piggy bank. Or when someone says that God only gives what we can handle. People say stuff like that because by giving every random calamity or violence a motive, no matter how lame, we attempt with our heads to keep the terror in our hearts at bay.
Jesus refutes the illusion that we can protect ourselves from harm by giving God all the credit for success and sinner all the blame for disaster. Jesus does what he does best, he goes to the vulnerable spot that their fright has opened up. He goes there because we can’t go there alone. It is not a bad thing to feel the full fragility of life. It is not a bad thing for us to count our breaths in the dark – but instead of staying in the place of fear, Jesus calls us to turn toward the light.
Jesus invites us to turn towards God, which is why he tweaks their fear. Don’t worry about Pilate and all the other things that can come crashing down on your heads, he tells them. Terrible things happen, and you are not always to blame. But don’t let that stop you from cultivating the good. That fearful place you feel at the pit of your stomach? That is also a holy place inside you, nurture it.
The conundrum of suffering becomes unsolvable when we expect that God is completely active and in charge of absolutely everything, and that we expect God to always act benevolently. Many years ago, Rabbi Harold Kushner said that willingly gives up one of God’s three attributes—that God knows everything, God is all powerful, and God is all loving—in order that we might be free. I have always been indebted to him for this insight. Over the years, I have taken it on a different, I hope more Trinitarian track.
Some Christians like to have God be the one behind every circumstance and every event…the cosmic manager (or puppeteer, some will sneer). Others understand God as the one who makes the clock and perhaps even winds it up every now and then, but lets it tick away on its own. That’s because we humans are pretty binary. We like things to be either one or zero. Yankees or Red Sox. Ford or Chevy. We want it one way or the other. Our brains cannot wrap themselves around too much contradiction. 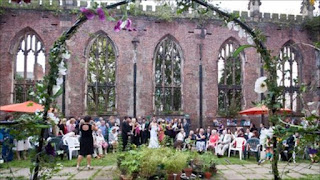 But Christians ought to be accustomed to concurrent realities. Realities that appear contradictory or impossible to contain but which cannot in fact exist except in a kind of concurrent, interrelationship where one truth cannot exist without the other even if they appear to be at odds.
We know Jesus to be fully human and fully God. Christians know that God is Trinity of three distinct persons—Father, Son, and Holy Spirit-- who contain the fullness of the one God without diluting the personhood of the three. When we say the creed or close a collect, we acknowledge in shorthand that the nature of God is a unity of concurrent realities.
And in nature, (and here I know just enough to be truly dangerous...!) physics tells us that complimentary realities are part and parcel of the created order: light is at once a wave and a particle; today we live in a world that is at once makes use of Newtonian and quantum mechanics—Newton shows us how to launch and keep the International Space Station in orbit or drive your car, and quantum theory helps us scan your groceries and makes your GPS work.
Concurrent realities don’t just live in the physical world or in the person of God. They are deeply embedded in the mystery of living.
You see, the incarnation of Jesus, who is 100% God and 100% human in the same package undiluted, tells us something about how God addresses this eternal conundrum: in the person of Jesus, we see that God is at once intimately and fully involved with every aspect of our living and in every element of creation; and, at the very same time, we and the entire universe are completely and utterly free.
God is involved in everything we do, and natural laws and phenomena happen. God intimately knows and love us, and we are completely and utterly free. Not either/or but both/and.
But just because we are completely free and nature happens, does not mean that God is apathetic to our suffering or distant from our reality. God is very much involved and has given us a solution.
First of all, Jesus’ incarnation shows us that God is truly with us. And Jesus’ story about the gardener who talks the householder into giving the unfruitful fig tree another chance by cultivating and watering it tells us something of how this works.
Today we heard another story of God appearing to a person through a plant…when God appeared to Moses in the form of a bush that was on fire but not being burned up. When Moses sees this strange sight while minding his father-in-law’s sheep, he draws near to check it out. But God tells him that the place where is standing is holy ground. And God is about to directly intervene to liberate the Israelites from their bondage in Egypt and lead them to a land of promise.
This is what have come expect God to be doing. Showing up. Acting decisively. Knocking heads and taking names. God’s liberation will be much more complicated and subtle than that, but that’s what we remember. 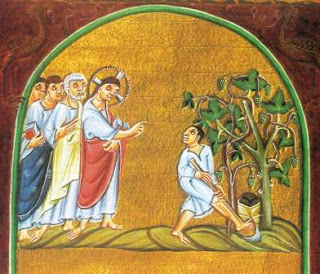 But Jesus tells the story of another plant, an unfruitful fig tree that its owner is ready to give up on and cut down. The gardener pleads for the tree, saying that he will care for it—give the tree another chance, he says. Think of the ground around that tree that has been dug up, watered, and around which manure has been spread also as holy ground.
There is holy ground where God shows up, doing things miraculous things outside our expectation.
There is also holy ground that is appears quite ordinary but in which is in fact ground that has been disturbed, into which is spread food, water, and manure… and a plant that has been pruned, all so that we may bear fruit.
Jesus’ parable reminds us that we are not helpless. We cannot stop suffering but we can in the meantime be attentive and caring to one another, focused in our prayer and in tune with the world around us. Above all (and this is the real reason why we confess our sins in Lent) we can honest about what we know and what we don’t know. We can be honest to God and ourselves about what we fear, what we ignore and what we hope we have mastered, what we have tried and where we have failed.
We confess because know that Christ goes to the most vulnerable places possible in his passion where they will go with him to the cross where all this that separates us from God, each other, ourselves, and nature will die. Giving God our honesty will, in fact, feel like dying. Recognizing that we are not in control feels like darkness. By cultivating the things we can do—our love, our relationships, our attentiveness—this is how we discover resurrection and receive the strength that turns our frailty into our greatest strength.
Bad news travels fast. But the good news is that God is with us in all of life…when things go right, and more importantly, when things go wrong…in Christ we know that God is intimately involved in all of it. God suffers with us, accompanies us, and rises with us.

Email ThisBlogThis!Share to TwitterShare to FacebookShare to Pinterest
Labels: Being a friend and apprentice of Jesus Christ, Pastoral Care, Sermons, Suffering, Theology