The heart of Christian leadership is servanthood 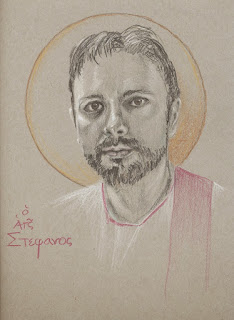 A Sermon at the ordination of Dale T. Grandfield to the Sacred Order of Deacons, June 4, 2016

Once upon a time, a seminary classmate of mine, who is now on the faculty of a certain seminary in a certain city, walked into a classroom full of eager, young junior year seminarians in one of their first classes and wrote on the chalkboard “Ordination is demotion.”

Today is a good day to think about Christian leadership, and how it is different than other kinds of leadership and how, you, Dale, and we, the gathered People of God, might live that out.

Simon Sinek is right now on my top ten list of people who think about leadership and groups. He has a book called “Leaders Eat Last” and in it, he tells this story about Captain William Swenson who was awarded the Congressional Medal of Honor for his actions on September 8, 2009:

On that day, a column of American and Afghan troops were making their way through a part of Afghanistan to help protect a group of government officials, a group of Afghan government officials, who would be meeting with some local village elders. The column came under ambush, and was surrounded on three sides, and amongst many other things, Captain Swenson was recognized for running into live fire to rescue the wounded and pull out the dead. One of the people he rescued was a sergeant, and he and a comrade were making their way to a medevac helicopter.

And what was remarkable about this day is, by sheer coincidence, one of the medevac medics happened to have a GoPro camera on his helmet and captured the whole scene on camera. It shows Captain Swenson and his comrade bringing this wounded soldier who had received a gunshot to the neck. They put him in the helicopter, and then you see Captain Swenson bend over and give him a kiss before he turns around to rescue more.Sinek asks the question:

…where do people like that come from? What is that? That is some deep, deep emotion, when you would want to do that. There's a love there, and I wanted to know why…? You know, in the military, they give medals to people who are willing to sacrifice themselves so that others may gain. In business, we give bonuses to people who are willing to sacrifice others so that we may gain.

So he asked those in military service, "Why would you do it? Why did you do it?" They all say the same thing: "Because they would have done it for me." This jives with my experience of every nurse, EMT, firefighter, and cop that I have ever ministered to as a chaplain. It also jives with my experience as a parish priest in ordinary extraordinary communities just like this.

The challenge is that this deep sense of trust and cooperation are feelings, not instructions. As Sinek says, “I can't simply say to you, ‘Trust me,’ and you will. I can't simply instruct two people to cooperate, and they will. It's not how it works. It's a feeling.”

Sinek’s observation points to what is at the core of what we are doing here today: because at the heart of Christian leadership is servanthood.

Today’s lesson from Acts is a very important lesson in my own spiritual journey. It works on so many levels. But, believe it or not, if the only way you encounter the Bible is through the Revised Common Lectionary, you will never, ever hear this story on a Sunday. It just doesn’t show up! If it weren’t for ordinations and the Daily Office, the church would never hear this story at all…and that is too bad.

Here is what happens:

The apostles, who, if you recall, are themselves new to ministry, have started this amazing, happening church! They are feeding people, sharing the resources of the whole community to care for those in need particularly widows and orphans. The church in Acts is growing like wild-fire. Baptisms right and left, from not only the Jewish community (remember—the Church was still a Jewish sect at this time) but from the Gentile world!

But success was killing them. Apparently The Twelve were in a panic because what they started had grown so large. They feared that they would no longer have time to go out preach and teach. The Twelve were feeling overwhelmed.

So the apostles did what leaders the world over have done since time immemorial: (1) They complained that they did not sign on for this, and then (2) they kicked the can down the road while (3) being sure to use the language of the pastoral high road.

What we have here is the first administrative freak out in the history of the church! And the new Deacons rose to the occasion. (I see the Deacons in the room nodding their heads. So what else is new?) They rolled up their sleeves, slung their towels over their shoulders, and went to work.

But for The Twelve, there is also real maturity going on here. Just as Jethro took Moses aside and said, “Listen, son, you can’t do this alone” or when Moses chose the seventy, The Twelve have realized that listening to the Spirit all by themselves was not going to cut it. The Spirit was speaking through the whole community, so they had to distribute their authority, both to those first seven deacons and to community that chose them.

Although they didn’t know it, The Twelve had themselves experienced their own diaconal moment, and in so they doing they began to heed the Holy Spirit’s prompting and respect and trust the people that God has given them to serve.  They discovered that the heart of Christian leadership is servanthood.

This is a lesson we have to learn over and over again.

Which is why that the most diaconal thing that a Deacon (or any Christian!) can do is to ask“why.”

Especially since we spend a lot of time on the “what” and the “how” of Christian ministry but rarely on the “why.” We see this in our evangelism all the time. We say, “Come to our church, we welcome everybody!” (That’s the what.) And we say, “We have really beautiful worship! Come and join us!” (That’s the how.) They are very important. Congregations that get these right are, well, amazing! But “Why” do what we do? And why, compared to the Farmer’s Market, or the Iron Pigs, or sleeping in, should anyone care?

Because we have in the person of Jesus Christ seen the face of God. And in encountering Jesus, I have found myself, fully known—in all my brokenness and in all my potential—and fully loved.

Why? Because in Jesus Christ, we have a community and an identity.

Why? Because in Jesus Christ, we have discovered how to love the people around us and do the things that addresses the deep pain of this world.

Why? Because God gives us he tools and the power to be the people God made us to be.

Why? Because God, who could come to us in any way God wanted, chose to become incarnate in the form of a servant in the person of Jesus Christ.

You will be spending much of your time in congregation with organizing the “what” and the “how” of parish ministry. People will judge you on the quality of the program you create and manage. But they will love and trust you only as you inspire them to join together in God’s work of saving, loving, and caring for this world and each other.

You know this already. You have seen the miracles that safe, generous leadership can create, and the wreckage that disconnected leadership, or leadership built on theories of disruption, can bring. When you went on adventures exploring antique stores and (apparently) empty churches with a friend. When you have directed choirs and led congregations in music. When things got crazy and you decided to gather your friends in the Chapel in the middle of the night to sing hymns. When, in the moment of crisis, you walked across the aisle in a chapel full of hurting people so you could embrace and hang onto a friend in deep pain. When you and Brad took a risk, loaded up yet another U-Haul and went to a strange, faraway place and a new community. When you and your friends debated the deep truths over beer and big sandwiches at Shenanigans…through all of this you have been discovering this truth again and again and again:

The heart of Christian leadership is servanthood. 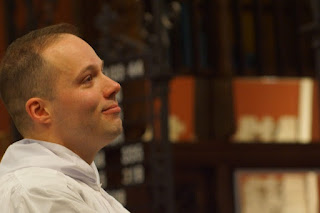 The time has come. This parish—this gathering of God’s people-- has heard God’s call, identified you as one set apart for a special ministry, and has placed you before the whole church to test and confirm that call and to form and prepare you for ministry. You are ready for this new journey.

Be the guy who asks why.

Be a leader who creates safe spaces of deep grace.

Trust the people God has given you to serve.

In your own Hundred Acre Wood (and every parish is The Hundred Acre Wood, get over it!) do as Piglet does: When you wake up, ask yourself “I wonder what’s going to happen exciting today?” Which is a pretty good bookend to a good Ignatian Examen every night.

Ground yourself in the whole prayer of the whole church everyday.

Be an ambassador of reconciliation. This is not a job for wimps, but you’ve got this.

Because you have a servant’s heart, and that is the foundation for excellent Christian leadership.

Email ThisBlogThis!Share to TwitterShare to FacebookShare to Pinterest
Labels: Being a friend and apprentice of Jesus Christ, Leadership, On being an ambassador of reconciliation, Ordination, Sermons