The geography of the holy 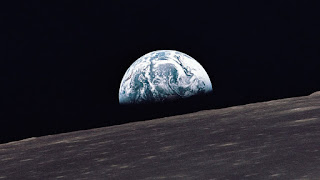 There is an old story that comes from the heady days of the space race between the USA and the former Soviet Union. The story goes that when Yuri Gagarin, the first person to fly in space and orbit the earth, made his voyage in 1961, that he looked out the window and observed that he did not see God.

It gets weirder. It turns out that Gagarin never said anything one way or the other about seeing God out the window of Vostok-1, but we do know this: before his rocket lifted off from Star City on the Wednesday after Orthodox Easter, Gagarin took his daughter, Yelena, to be baptized.

The only record of the infamous comment in fact comes from a speech by Nikita Khrushchev in the month or two after the flight. And he didn’t quote Gagarin but rather, in an attempt to mock religion, said what Gagarin didn’t see. The Western press, perhaps spotting an opportunity for propaganda (or else not being able to understand Russian) immediately attributed the words to Gagarin.

I wonder if this comment, and the geo-political flap that arose from it, didn’t inspire the 1963 film Heavens Above!, where Peter Sellers plays a naïve but well-meaning vicar who gives away food and welcomes the poor into his church, becoming such an annoyance that he is shot into space as the new Bishop of Outer Space, orbiting the earth reading the psalms over the radio.

The misquote attributed to Gagarin was definitively answered by three American astronauts, Bill Anders, Jim Lovell, and Frank Borman as they orbited the moon in Apollo 8 on Christmas Eve, 1968. The three astronauts took turns reading Genesis 1:1-10, the creation story, on the same flight that gave us the iconic image of the earth rising over the horizon of the moon.

The geography of holiness is a tricky and dangerous thing.

Here we are, forty days after Easter, on another Feast of the Ascension, celebrating the return of the living, crucified and resurrected Jesus to heaven.

What is described in both the Book of Acts and in the Gospel of Luke is not a mere disapparation. Jesus doesn’t just fade into the ether, but instead physically rises up into the sky, leaving the disciples staring into the heavens, mouths agape, until an angel comes along and tells them, essentially, to snap out of it and come back to earth.

As sophisticated as we are, no matter how many airline flights we take, and no matter how many space shots we’ve witnessed, we still tend to think of heaven as “up” and hell as “down”, with us living somewhere in the middle. But as interesting as this cosmological hot-hero sandwich might be, the real significance of the Ascension is not geography but relationship.

If you turn to the catechism in the Book of Common Prayer, you will discover that “the mission of the Church is to restore all people to unity with God and each other in Christ.” (p. 854)

In both the Gospel of Luke and in the Book of Acts, before he returns to heaven, Jesus tells his friends and apprentices to say put, and await the gift that God will send them.
He also teaches them and reveals to them one last time how everything they have seen and heard fits together as God intended. We discover that the disciples were not powerless nor afraid, but spent their time together in what must have seemed like a transformed community, praying and singing and spending time in worship. They stop hiding, but now live out in the open going between their home(s) and the Temple.

The geography of holiness had changed. Their place, their city, once a place of foreboding and death, is now a place of wonder and worship. They saw the world and their place in it with new eyes, and this even before the Paraclete would arrive in another ten days.
You see, the Ascension didn’t just take Jesus back into heaven, into God’s realm in the cosmos, the Ascension revealed how the friends and apprentices of Jesus were now themselves drawn living in a new relationship with God and each other through Christ. They were changed. Their relationships with each other and even, in their eagerness, with the world was transformed.

The Ascension shows us the sneakiness of God. It’s importance is exactly backwards from what we expect. We think it is about going “up,” when all along is about tuning our hearts and senses towards Christ, so that we can see more and more that God’s work is being done on earth—all around us!-- just as it is in heaven!

The Ascension shows us how we are drawn into Christ, to each other, and toward the world. Christ draws us towards heaven while at the same shows us that the only place we can really find God is right here.  The Ascension shows that God’s power and healing is not reserved for the someday but is also right now. The Ascension demonstrates that in all of our everyday living, the Risen and Ascended Christ continues to be present.

Metropolitan Anthony Bloom reminds us, “that the realm of God is dangerous. You must enter into it and not just seek information about it.” Look at what happens in Luke and Acts. Jesus draws us to heaven and directs us to "stay in The City"—in the places and in the relationships where God has placed you. We hope for heaven, and the place where we receive “power from on high” is in “the city,” where we his people live, pray, work, and worship.

When we do heavenly worship, with glorious music, we certainly are drawing ourselves towards heaven at the same time we are witnessing to the reality that God is all the time bringing heaven to earth.

I told you… God is sneaky that way. This is the geography of the holy.

It is said by some who knew him, that Yuri Gagarin carried in his pocket a small icon, both in his space flight and later when he died in a plane crash in 1968. I don’t know about that. But I do know this: we here in this "city," in this place, in our witness, worship, and in our holy work, we baptized people are icons of the holy. What God is doing on earth with us now is what happens in heaven, just as Jesus said when he taught us to pray.

In the Ascension, we are invited to both see heaven and live in the city and so inhabit the geography of the holy.

A sermon for the Feast of the Ascension, May 10, 2018 at the Cathedral Church of the Nativity in Bethlehem, Pennsylvania.
Posted by Andrew Gerns at 7:00 PM

Email ThisBlogThis!Share to TwitterShare to FacebookShare to Pinterest
Labels: 3n1-1n3, Ascension, Being a friend and apprentice of Jesus Christ, Easter, Faith and Science, Sermons, Theology, Worship