It's time to leave the upper room! 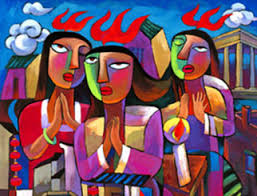 It’s time to leave the upper room! We have been stuck here too long. We’ve gotten used to the risen Jesus coming to us; to the Holy Spirit coming to us. We are okay with sending someone else out to deal with the consequences of crucifixion and coming back with reports of empty tombs.

But, no. It is time to leave the upper room.
It’s true that a lot happens in that space: from Holy Week all the way through the Easter Season, we’ve been hearing about all the that that went on in that upper room in Jerusalem. And even though those events shaped the church for years— centuries! —to come, the truth is that it is time to leave. It’s time get out!
I know we’re all a little stir-crazy right now. Zoom and YouTube are great but they are not the same. Many things are different.
I want to get out and travel, even just go out to eat, and while I can do a lot from my little perch, and the grill is wonderful, it’s not the same. I love singing with our choir and how another member digitally turns our separate voices into the choral music for our on-line worship, it is not the same.
The thing is that it won’t ever be the same again, ever!
A lot of people are angry about that. I get it: we did not sign on for this. But here is where the experience of those disciples, those friends and apprentices of Jesus, is instructive.
The disciples did not sign on to be cooped up for weeks on end in their upper room. They followed Jesus as he walked around Palestine teaching and healing. They loved handing out bread and fish that seemed to spring like a gusher from baskets that started with just two donated fish and three loaves. They loved the crowds when he taught from hills, on plains, and from boats. They were astounded when Jesus raised Lazarus and the sick little girl from death and when healed the Centurion’s servant from afar. They probably got a laugh out of Peter’s reaction when some guys cut a hole in his roof to lower down a sick man from Peter’s upper room! 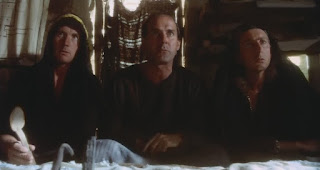 But when things turned sour, the disciples turned that upper room from which they had heard Jesus teach and where they probably planned all their travels around the holy land, into a shelter. A hiding place. A spiritual quarantine. They hid there and hunkered down.
Okay, after the last supper and the foot washing, maybe that made sense. They thought they were marked men and feared being arrested and they had no place to go after Jesus’ arrest and crucifixion. It was their hideout. It soon became their tree-house.
Because after the resurrection, when they decided they could venture out to the temple to pray, they still did not go very far! They always came back to the same upper room! They only gradually became less isolated but only a very little bit.

God is nothing if not persistent, look at all the ways that God came to them in that little space. The Last Supper happens in the upper room. Jesus washes the disciple’s feet there. As I said, after the crucifixion, that’s where they hid. They agonized and worried and grieved there.
When the two Mary's and the other women left their male companions in the room and dared to go Jesus tomb to do their sad work, it is they who burst through the doors with the first news of the resurrection! It was from the upper room that Peter and the Beloved Disciple ran to see the Empty Tomb, and it was to the upper room that they returned. The Risen Jesus arrives there and gives the remaining apostles the authority to teach, forgive, and heal just as Jesus did.
And it is in the upper room where the disciples received the gift of the Holy Spirit and start to speak in a variety of languages so loudly that even those passing by on the busy street below stop and listen in amazement.
The problem with upper rooms is that they can become hiding places. The disciples could have reveled in their newfound spiritual gifts and insight and stayed home. It could have become a dark, smelly, closed in space.
Instead, it ended up being an incubator of Gospel imagination and the home-base for a brand new community!
In our upper rooms, we will see our best selves and, I hate to say it, our worst selves will be also be revealed. We’ll get tired, bored, exasperated, even angry. And when that happens, we will be showing off our deepest anxieties, rages, and fears. It won’t be right… but it is not unexpected. We will be tempted to get lost in the echo chamber of social media and build our own little silos where only people who share our opinions and who stoke our fears reside. We’ll have to find new strategies to temper our inner impulses and urges.
And that is why it is important to remember those disciples in that upper room. That little space may have contained the disciples— and everything they brought with them—but it could not lock out Jesus or bar the Holy Spirit! It became the testing ground for their own proclamation and power until finally the room was just not big enough… they had to go out into all the world because God’s Spirit, and God’s people whom he inhabits, just can’t be cooped up any longer!
Being cooped up is not simply a matter of bothersome inconvenience, where we bicker about wearing masks. The message of Pentecost is that God has the power to break down walls that we have so desperately and urgently built up between each other.
Pastor Dennis R. Edwards, associate professor of New Testament at North Park Theological Seminary in Chicago talks about the frustration he feels towards the white church in the wake of the lynching of Ahmaud Arbery, the shooting of Breonna Taylor, the threat of the use of the police by a white woman to threaten Christian Cooper, Minneapolis police officers brazenly and deliberately executing George Floyd with an illegal and immoral (and unnecessary choke hold) and of the fact that COVID-19 disproportionately harms black and brown people.
In his essay in Christianity Today, he talks about the power of God to break down these walls. He says:

“Acts 16:35–40 is the epilogue to a powerful story of God’s deliverance. The imprisoned Paul and Silas were singing hymns when an earthquake hit around midnight. Such was the power of the quake that the prison doors were opened, chains fell off prisoners, and the fear that overcame the jailer resulted in his conversion, along with that of his household.

“We could reflect a bit on God breaking people out of prison, but instead I want to highlight the epilogue, which tends to get overlooked in sermons from Acts 16. The morning after the earthquake, the jailer told Paul and Silas that the magistrates had released the apostles and they could “go in peace.” But Paul and Silas did not peacefully walk away. Instead, Paul replied, “They have beaten us in public, uncondemned, men who are Roman citizens, and have thrown us into prison; and now are they going to discharge us in secret? Certainly not! Let them come and take us out themselves” (Acts 16:37). Some of my friends argue that Paul’s concern here is the propagation of the gospel. Perhaps, but the text doesn’t say that. What we do see, however, is Paul’s agitation over the violation of his civil rights as a Roman citizen (a point he brings up strategically in Acts 21:39 and 22:25–29).

“At the very least we can acknowledge that injustice demands a response to people in power. (For more on this, see Esau McCauley’s theology of policing.) Paul called the magistrates to account for their actions, and we must do the same. We should be outraged over injustice, and people in positions of authority need to feel our anguish.”

Our problem is much bigger than being stuck at home, bored. The co-incidence of pandemic, and of racial and police violence has revealed that we are locked into systems and a way of thinking that assumes that my welfare depends on someone else's servitude; that my privileged place in society must, by definition, come at the expense of another.
When the Holy Spirit comes on Pentecost, it is not simply to make people better pray-ers, church-goers, or even to make people nicer. The Holy Spirit breaks through the walls of disciples hiding place and propels them to suddenly speak in the languages of people other than themselves.

And not just speak, but to walk with them and to be with them, and to be the Good News with them. Too often we think of Pentecost (and for that matter mission and evangelism) as a process of getting the other to be more like me, or (failing that) to accept their lowliness.
No! Pentecost is the signal and reality that God’s reign is for all God’s people! That in Christ, as Paul would later write, there is no longer “Jew nor Greek, slave nor free, male or female.” The miracle of Pentecost is that God values and holds up all God’s people in all their variety and expression.
When the Church participates in racism or racial violence it locks out the gift of the Spirit, and kicks Christ to the curb. When we are silent, it is worse: we condone the very forces of evil that Christ came to overcome. We lock ourselves into to our own upper rooms.
The Good News is that the Holy Spirit is never locked out of our upper rooms, whatever they may be!
In fact, God is propelling us out into the world to confront the powers of sin that corrupt and destroy the creatures of God. And that means we both listen to the science that tells us how to deal with this virus, and we listen to the voices of the marginalized and recognize our part in combatting the sin of racism. And when we get out and confront the evils of race, class, and the abuse of power to favor the few, we are participating in the same work of the same Spirit who  through Christ, heals and renews  us, all people, and all creation.

It is time to get out! It's time to leave our upper rooms.

Email ThisBlogThis!Share to TwitterShare to FacebookShare to Pinterest
Labels: 3n1-1n3, Being a friend and apprentice of Jesus Christ, Everyday Ethics, Faith and Culture, Justice, On being an ambassador of reconciliation, Politics and Faith, Racism, Real Life Ethics, Sermons, Theology