When will we gather again and when we will receive Communion? 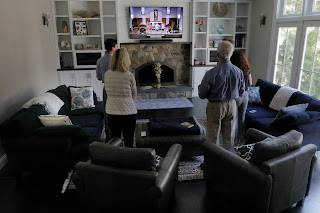 (Updated Tuesday, May 19, 6 p.m.) Yesterday, I got an e-mail from a member of my parish. It raises a number of questions that I know have been floating around my congregation (and others). I have decided to post his note and my response.

We are in this for the long haul.Our pastoral and liturgical response to this unfolding pandemic will require theological inquiry, community reflection, and liturgical creativity.

Here is part of the letter that started this:

Here is my response:

Thank you for your e-mail and for your questions. I will try to answer them as best as I can.

When will we re-open and gather for in-person worship?

• Gathering for online worship, formation, and community
• Limiting service ministries to safe protocols dedicated to essentials such as feeding ministries

There are several  questions I don't have answers to. For example, does that mean that the whole diocese will move through the phases together or will we move through regionally depending on how the situation unfolds in different areas? I can foresee the rural northwest of our diocese reaching "green" (following the State's scale) well ahead of us in the Lehigh Valley, but Bishop Kevin could decide to have the whole diocese re-open at once rather than by region as an act of unity and visible communion. That will be up to him in consultation with the Diocesan Council and Standing Committee.

As for the June 1 date at Trinity Wall Street and June 15 for Doylestown (Diocese of Pennsylvania) that you mention, as I read their websites, these are tentative dates. I can't say what TrinWall's criteria is, but if Doylestown follows the protocol laid out by the Diocese of Pennsylvania, their reopening will depend on how new cases develop in their county.

Even in places that have reopened, the requirements for physical distancing, hand-washing, masking, etc. might rule out Communion as we know it. Many places are also prohibiting (or at least discouraging) congregational singing. (For example, the Royal School of Church Music has suspended the King's College Course normally held at St. Stephen's Wilkes-Barre in mid- to late-July because singing blasts the droplets that might carry the contagion.)

Keep in mind that the virus is passed along from people who are asymptomatic, and because of the scarcity of testing supplies, asymptomatic people are generally not tested. That means that by the time a person pops symptoms and tests positive, they may have been conveying the virus for 14 or more days before a definitive diagnosis. This is why the isolation and physical distancing is the required (and wisest) protocol.

As for our own Diocese, when the Lehigh Valley reaches "Yellow" we'll see if that moves us to Phase II on the DioBeth scale. I don't know when that will be, so I don't know when in-person worship will return. (Update: Bishop Kevin has distributed guidelines as to how we'll enter "Phase II" of our COVID-19 response in the Diocese of Bethlehem.)

Right now, at Trinity, Easton, I know of at least five people who have either tested positive for COVID-19 or have been exposed to someone who has. One parishioner has died from COVID-19. So I have opted for an assertive approach to handling this crisis.

Will we only be doing Morning Prayer for On-Line worship?

Right now, we have no specific guidance from Bishop Kevin as to the do's and don't's of on-line worship. If the Cathedral sets the norm for the diocese (and this is the only place where I've seen Bishop Kevin preach and/or lead worship on-line), then the norm is Morning Prayer. I suppose that Ante-Communion is also an option.

My approach has been to assemble worship with as many people as possible reading or leading prayers from either home or on-camera from church while practicing safe physical distancing. Our virtual choir happens as members record their singing and then the voices are mixed into a single recording and then edited into a Power Point. All of this is saved mixed as an MP4 video and published on YouTube. After publication, it is posted on our web-site, our social media, and a link is sent to folks on our e-newsletter list.

Again, my goal is to involve as many people as possible rather than have a point-and-shoot worship (which is how we do Wednesday and major Holy Day services via Facebook Live) focusing only one or two clergy in a largely empty room.

This is where my read of Anglican theology of worship comes into play. One Episcopal parish in the LV is doing an on-line Eucharist, but the reception is only by the presiding priest and there is no congregation present either in actuality or on-screen. As you will see below, in my mind this does not meet the minimum criteria for Eucharist

The concept of spiritual communion in our tradition has been reserved to special circumstances such as those sick or infirm to receive by mouth, or, interestingly, to soldiers in battlefield situations. Older editions of the Armed Forces Prayer Book (an Episcopal document in origin) first set out the prayer that we reprint in the e-newsletter for spiritual communion.

I am also informed by my work in Catholic Healthcare. From 1994-2002, I was the director of pastoral care in a Catholic hospital. We had an extensive ministry by both deacons and extraordinary ministers of the Eucharist. When we had Mass in the hospital's chapel, the LEM's and/or Deacon would fan out immediately after Mass. On days when we did not have Mass in our Chapel, we'd time their work--- utilizing pre-sanctified elements-- so that it would take place immediately after the televised mass on EWTN at mid-day. The point was to connect the communicant with the community in communion.

Before the extent of our physical distancing was announced mid-Lent, I considered doing something very much like that: small groups in the presence of an LEV or Deacon who would then receive from pre-sanctified elements, while I would lead a liturgy via Livestream or Facebook Live. But this is not possible (nor advisable) in the current situation. The virus is just too virulent and too communicable.

On Private Masses and Distance Consecration

I believe that our Anglican tradition discourages both private masses and "distance" consecration.

A private mass is when the priest celebrates the mass without a congregation present.

Another approach, suggested by Dr. Diana Butler Bass (a lay theologian who migrated from Evangelicalism into the Episcopal church) and others, is that I could say the words of consecration on my end of a TV or Livestream broadcast and you could hold a piece of bread and cup of wine, and we could say that it was somehow consecrated and then you could receive... this is what I mean by "distance consecration...." I believe that this pushes us in a direction where we don't want to go: the Eucharist is a Sacrament, and Sacraments are not magic. The prayer of consecration is not an incantation but a work of the people of God in community.

At the same time, the Sacrament is not a point of personal privilege nor a private possession. It is an act of community that communicates Christ and mediates grace.

Dr. Butler-Bass has suggested that not having even a televised/live-streamed Mass is an act of "hoarding" by the clergy who are keeping the laity from the Sacrament, a view that I strongly disagree with. Reducing the question into a faux justice issue is, in my view, unhelpful, and misses the point of how sacraments function in Christian community.

Sure, God can do whatever God wants! Who is to say that the One who lives in Kairos (God's time) can't transcend Chronos (human time) and consecrate the elements across a TV or the internet. But Sacraments are not magic and the Eucharistic Prayer is not an incantation. I personally believe that the gathering of community is an essential element at the heart of the Eucharist.

Short of specific guidelines from the Episcopal Church (except for the general guidance of the Presiding Bishop, Bishop Kevin, and various other diocesan bishops), I have fallen back on the guidance I lived under during my time in Catholic healthcare nearly twenty years ago. The United States Conference of Catholic Bishops set out useful guidelines for televising the Mass, (updated in 2007) which in my view covers the issues of televised and live-streamed Mass in much greater detail in a very helpful way. A key passage says:

Since the liturgy is the work of Christ and the work of God's people, the televised Mass should always be celebrated within a living community of God's people whose presence reveals the full, conscious and active participation of the faithful. Even when the liturgy to be televised is taped apart from a regularly scheduled parish liturgy, there should always be a group of people who participate in the liturgy as fully as possible by their prayer, song, and presence.

Because the present Coronavirus situation precludes the gathering of a group of people who can fully participate in the liturgy, even for the purposes of video recording, I am wary of doing a broadcast mass that would seem to reduce the Eucharist to mere performance.

This week, I will be meeting with Fr. Raymond (a fine liturgist), Deacon Fran, and members of our parish's worship committee to discuss the possibility and limits of doing Eucharist on line and how we can do that according to the guidelines I've noted above. When Bishop Kevin issues guidelines for Phase II, we'll also meet as a Vestry to make some decisions.

Fortunately, we have inherited the traditional monastic offices in our Anglican tradition. Thomas Cranmer sought to apply the monastic pattern of frequent daily prayer. Before the consecrations of Samuel Seabury, William White, and William Provost as our first bishops, the Anglican (later Episcopal) Church in America functioned quite well not only without bishops but with very few priests. For almost a century and a half (or more!) before our church was formed in 1789, congregations in North America lived and thrived on the pattern of Morning Prayer, metrical psalms, and preaching (often by lay preachers reading from pre-printed sermons). They did this in a frontier church in a new country building new communities.

We are in a new frontier right now. We will have to think about mission, liturgy, community, and formation in new, creative ways. I think that we can mine those resources and our Anglican and Catholic tradition deeply and to good effect. When the day comes that we do find a way to more formally express ourselves Eucharistically, I don't know what it will look like, but it will be different and it will be wonderful! Right now, we are in an in-between time of waiting,  experimentation, exploration, innovation, and prayer.
Posted by Andrew Gerns at 1:04 AM