A yoke of blessing 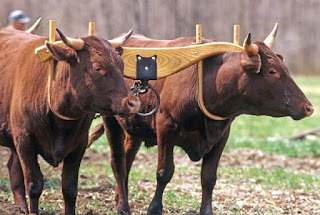 Jesus says that his yoke is easy and his burden is light. Paul says we want to do right but sometimes we do the evil we wish to avoid. It is a contradiction that every Christian must face if we are to live our baptismal lives and grow into the full stature of Christ.
I remember a few years ago, a video went viral on the internet and I think that today its’ message is still relevant. It came from Thailand. The vignette begins with a young boy who is caught stealing from a shop on a busy street. The shop-owner has the boy by the arm and she is calling for the police when another shop owner, the owner of a small restaurant, stops the woman. He sees that in the boy’s hands are a bottle of cough syrup and a package of pills. “Is your mother sick?” The boy nods petulantly. The man calls over to his young daughter and tells her to get a packet of food for vegetable soup. She rolls her eyes but she does it. The man pays the woman for the stolen medicine and gives the boy the vegetable soup.
Thirty years later.
In the same restaurant, the same man is having a busy day. His daughter, now grown, calls to her father and he looks up and there is a man begging for some food. He reaches over and hands the beggar a bag of vegetables for soup and then yells ‘Next customer!” Suddenly, he holds his head and falls over backwards.
Cut to the intensive care unit in a hospital. The daughter sits next to her father who is unconscious. She agonizes over a medical bill that will require her to sell their little restaurant. The camera shows a sign hanging on the door of the place that reads “For sale! Urgent!”
The next day she is at the bed-side when a nurse hands her an envelope. It is a medical bill. She opens it, her face filled with worry. And inside she finds that all the charges read “zero.” At the bottom of the bill is a note: “Paid in advance thirty years ago with a bag of vegetables and some analgesic.” And it is signed by the physician.
Then the screen interweaves the interaction on that street thirty years ago with the journey of the young man through medical school and with various patients.
This little vignette, which strangely enough was the ad for a bank in Thailand, is not simply a “pay it forward” message. It is an example of the impact we have when we live life from the standpoint of faith, of gratitude, and compassion.
Jesus’ yoke and his burden are summed up this way. Our lives are meant to be for others, for compassion, for grace, to be vessels and signs of hope. The burden and yoke of Jesus is to be aware of the presence of God in others and to live accordingly.
The parable of the man in the video points out that a life oriented towards compassion changes both people and the world.
The point of a yoke was to harness the strength of the ox to pull a plow across the earth so that seed may be planted in the furrows. The yoke makes the burden possible. If you’ve ever been to the Canal Museum at Hackett Park here in Easton, you may have seen the two mules pulling that large barge up and down the canal. The animals worked, sure, but the harness, the yoke, makes the work possible, put the energy to use.
The other thing a yoke does is steer. The farmer walks behind the oxen who wear the yoke to direct them so that the furrows are straight and that their pace is even.
Jesus calls us to learn and do his work. He gives the burden of compassion and he also steers us in the way that makes the most of our energy and gifts.
Paul’s epistle today reminds that sometimes we try really hard to do right and we still mess up. But instead of despair, the Apostle reminds the Christians in Rome (and us) that we are learning and are given the power to grow and change and effect change in our lives, to bring compassion to the people around us living under the grace of God in Jesus Christ our Lord.
In the end, the idea is that compassion, being alert to the people and world around us, giving each other a break, and humility will be a normal part of our living. Sometimes we aren’t very good at it, and other times we are the beneficiaries of compassion and grace that we might not deserve.  The yoke Jesus offers trains us and guides to be better able to walk the way of Jesus, naturally and spontaneously, planting seeds of love along the way.
That is our prayer and our calling, that in taking on Jesus, we will take on the important work of receiving the blessings brought to us and becoming a blessing to everyone God sends our way.

Email ThisBlogThis!Share to TwitterShare to FacebookShare to Pinterest
Labels: On being an ambassador of reconciliation, Real Life Ethics, Sermons