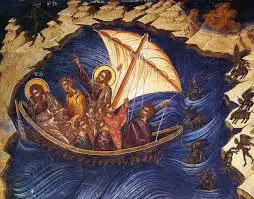 To tell you the truth, I am no good at weather prayers. I know. It comes with the territory. People will say to me usually in an offhand way, “Pray for rain, Father” or “Pray that it doesn’t rain, Father,” and so on. And while some evangelists and television preachers may claim to be able to re-route entire hurricanes with the authority of their prayer, I am barely able to summon up a rain drop.

But none of that is really important. What’s important is that Jesus is with us in the storm. I remember a song that I learned growing up in my home parish, lo, these many years ago sung by group of folk singing nuns called The Medical Mission Sisters.

In today’s Gospel, we see Jesus and his disciples in boats crossing the Sea of Galilee. They encounter a raging storm. They row with all their might. They adjust or even haul in their tiny little sail. They bail like mad. It looks like the raging sea will swamp their tiny boats. Jesus is in one of the boats. He is not rowing, nor he is not bailing, he is asleep. They come to him, upset crying out “Jesus! Don’t you care that we might drown?!?” So, Jesus wakes up, speaks to the storm and all is quiet. Then he asks “Why were you afraid? Where is your faith?”

They are amazed. And while the most skeptical among us might scoff, deep down we are amazed, too, and perhaps a little jealous. We wish Jesus could just speak to us and still the storms that we experience. Over and over again we want God to fix it, to make it better, to make the bad things go away. But what Jesus wants us to do is cross the lake.

At the beginning of the story, Jesus invites them to “cross the lake.” When you read the Gospel of Mark, pay attention to when Jesus crosses the lake. It means that Jesus is moving from one world, one culture, one people, to another. For farmers, herders and townspeople, the people for whom the Gospel was written, going out into the water was a crazy, risky thing that was only occasionally necessary. Fishermen plied their trades in a dangerous and unpredictable environment, where anything could go wrong and usually did. Crossing that little Sea of Galilee was deliberately stepping out into the unknown. And this is precisely what Jesus wanted them to do.

He wanted them to go even though storms happen. And then he fell asleep.

The important part of the story was not that Jesus stilled the storm—but to learn that no matter the journey, when storms happen, Jesus is with us. He is with us when the storm is the most fierce. The disciples lack of faith happened when, in their fear, they forgot that truth.

I remember when I first saw Archbishop Desmond Tutu in person the very first time. It was right after he won the Nobel Peace Prize in 1985—he was to be the keynote speaker at the diocesan convention that the parish I was in was hosting! That was both very cool and way crazy!

At that time, he was still the Archbishop of Cape Town, and South Africa was still under Apartheid. Back then, no one knew if the white government was going to give up enforced racial separation and no one knew if violent revolution was going to happen. Everyone thought Tutu was a marked man. But still he smiled a lot. At the gathering where I first saw him, someone asked him if he was afraid someone might kill him. He said—and I will never forget this—he said, “Death is not the worst thing that can happen to a Christian.”

We are prone to forget that, and a flap that made the news this week has reminded me of Jesus’ lesson in the boat, when he asks, “where is your faith?”

It seems that a bunch of RomanCatholic bishops have decided that their church should deny communion to President Biden because they disagree as to the best way to limit or prevent abortions and the role of government in that. These bishops want to ex-communicate the President over this. Now, I understand, that this is their playground and they get to set the rules in their own sandbox, but when their judgements affects our witness and the witness of every historic Christian tradition, because the culture has this way of mashing us all together, we have a right to step up, raise our hands, and clear our throats.

In the Episcopal Church, there is one and only one reason for a priest to prevent a person from receiving communion… and that is when two people are at such enmity with one another that they can’t work it out. I am allowed to say, you can’t come to the table until the parties reconcile… and even then, our bishop can tell me to take a chill pill and let them in anyway. I can’t (and won’t!) stop you from receiving communion… even if you agree or disagree with me or anyone else on an issue, let alone how you vote.

This gracious approach is, in fact, an old, old practice. The 17th century Anglican priest and founder of Methodism, John Wesley said, “Come, sinners, to the Gospel feast, ye need not fear or be turned away, for Christ has holpened all mankind.”

Several of my clergy colleagues have pointed out on social media that even Judas received from Jesus at the first Lord’s Supper. This is Jesus’ table, and the one who stilled the storm and crosses rough seas with us, invites all of us to it.

No matter the storms, as we cross the sea and make the journey, Jesus is with us, in our little boat, whipped by wind, yet still afloat. And when he sends us into the world, he is with us: he feeds us, he teaches us, and he stills the storms within us. Don’t be afraid.

Email ThisBlogThis!Share to TwitterShare to FacebookShare to Pinterest
Labels: Baptismal living, Being a friend and apprentice of Jesus Christ, Sermons