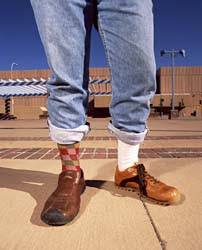 by The Rev. Canon Tim Smart, Parish of Sutton
and The Centre for Lay Education, Diocese of Montreal, rose to speak in the debate on same-sex blessings. A version of his words was later posted on the website of the centre.

Where do socks go after you put them in the washing machine? This deep theological question has been plaguing the human mind ever since the invention of the wash and spin cycle.

Who among us has not been befuddled and confounded when, having made the transfer from washer to dryer, and begun to sort through the clean laundry basket, been confronted with the spectacle of one lone sock?

For many of us, the remedy has been to put the lonely sock quietly away in the dresser drawer and forgot about it; claiming that singleness is now its true vocation.

But for a significant minority, the answer has been not to consign the single sock to the everlasting darkness of the drawer, but to mix their socks: gray with black, brown with beige, blue with navy blue. We now call such people Hetero-socksuals – people who wear different kinds of socks at the same time.

Understandably, this situation has caused huge stir in the Anglican Communion. Until recently, we only blessed people who wore the same socks on their feet; black with black, white with white, blue with blue. We call these people homo-socksuals. Same-socks wearers.

Most of us have been reared in a culture and a religion which has blessed homo-socksuality as the norm. The idea of people wearing different kinds of socks at the same time has sounded perverse and unbiblical.

In the past, hetero-socksuals had to be discreet. They wore long pants to cover their different socks. They avoided crossing their legs while seated and rarely wore shorts in public.

But today, hetero-socksuality is all around us and many of our Canadian provinces have gone so far as to allow for the legal wearing of different socks.

What is the church to do?

As you know, the former Primate of the ACC called together the brightest theological minds in this country to look at the whole area of human socksuality. After a number of meetings they determined that the question of sock-wearing is a matter of doctrine to the Church, but not core doctrine. The conservatives pointed to a passage from Leviticus which declares that we should not wear materials of mixed fabrics. While the liberals on the Commission, proclaimed that sock wearing is a justice issue, that must soon be settled so that we might go on to tackle other serious issues confronting the Church; such as the wearing of hats, gloves and snow boots.

Meanwhile, our blessed Communion is said to be on the brink of schism. There are wealthy white sock coalitions that have sought moral support from their black sock brethren. Some of these conservative black sock brethren stand by the missionary position that God only blesses homo-socksuality or the wearing of same socks.

While the liberal coalition likes to point to the widespread practice of hetero-socksuality in the church in every country of the world as evidence of God’s love of diversity and colour.

What are we to do?

Like many of you, I was brought up to believe in rightness of homo-socksuality. I thought that hetero-socksuals were displeasing to God and would all go the hell.

But life experience has broadened my outlook.

I met a man once who, after I had gained his trust, revealed to me that on one foot, he wore a Harvey Woods sock, while on the other foot, he wore Fruit of the Loom. I must say, you couldn’t have met a finer man – a blessing to both his church and his local community. All he was looking for was acceptance, inclusion and love.

My Lord Bishop, I believe it is time for our Church to embrace all those who wear different kinds of socks at the same time. Let us show our love and offer the hetero-socksual community the same kind of love and acceptance we have offered the homo-socksual community, lo, all these many years.