Nora's freezin' on the trolley 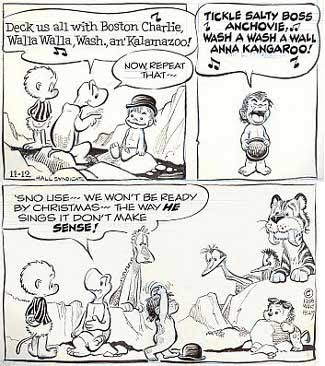 We are now full swing into "The Holiday Season" and it seems like every place that has a speaker built into the ceiling is spitting out variations on the same twelve or fourteen Christmas tunes.

There is only so much you can do with the same material, no matter how many artists have a crack at it...and some of the arrangements of the most popular (agreed-upon?) holiday tunes can range from the simply awful to the nonsensical.

Seems to me that if you going to sing (or listen to) non-sense, it ought to be fun. There is no nonsense like authentic non-sense. Fortunately, there is a ready body of material--but most of us never heard of it or else have forgotten about it.

When I was a kid, my father introduced me to Walt Kelly's comic strip 'Pogo'--an essential part of any well-rounded education!--and sooner or later, sometime between sandwiches of leftover turkey and putting up the tree before midnight Christmas Eve mass, he would inevitably break out in song with this:

Deck us all with Boston Charlie,
Walla Walla, Wash., an' Kalamazoo!
Nora's freezin' on the trolley,
Swaller dollar cauliflower alley-garoo!

I would say "Dad...those are not the right words." He'd say "That depends."

Tonight, I was in the grocery store humming and then singing to myself this very same tune. Imprinting works.

When my kids were small, I'd sing it to them and they'd look at me quizzically and say "Daaaddd! Those aren't the right words!"

Now they are grown and they just roll their eyes at their eccentric father. But if I have done my job right, they will someday be doing the same thing to their kids.

Here, thanks to the miracle of Google and the blog Charming, Just Charming, are the rest of the words to this classic Walt Kelly Christmas carol. (He says: "If YOU are old enough to remember this you are older than dirt!" I say: If this doesn't make you smile, well, nothin' will!)

Deck us all with Boston Charlie,
Walla Walla, Wash., an' Kalamazoo!
Nora's freezin' on the trolley,
Swaller dollar cauliflower alley-garoo!

Thanks for the Link Andrew. I was a big fan of Walt Kelly and the Pogo crew. That was back when I went to the comic pages first thing when I bought a paper. Now I seldom buy a paper...

As your oldest brother, I remember when our father first saw that carol:

When I was very small (in the early 1950's) he would come home from work and he would read the comics from the old Herlad Tribune to me. One of our favorites was Pogo. He would read it in his version of a southern accent. One year, he read the strip that had "Deck the Halls ..." We got laughing so hard our father got the Hic-coughs. Our mother came out of the kitchen to see us laughing like fools and she probably thought we had lost our minds. He tried three times to read it to her. She had to read it herself and started laughing too. That began the family tradition you spoke of. A few days later, a carol that became another favorite was published:

Good King Sauerkraut looked out
On his feets uneven
While his toes he counted out
Nine and ten eleeven” ...

This is the stuff that not only ties families together, but generations - as you said - your kids may just look at you weird and order you to the back of the bus; but it makes you special in their lives.

Thanks Andrew. I remember Pogo and gang well.