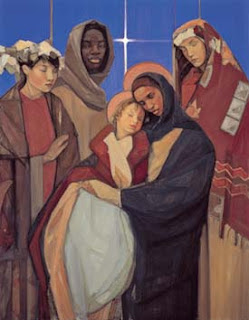 (Saturday 1/5/08 updated some more) The Standing Committee of the Diocese of Fort Worth is unhappy. They are unhappy with the card that our Primate sent out this Christmas to the Bishops, including to their own Bishop Iker.

They wrote to their clergy the following letter:

To the Clergy and 2007 Convention Delegates,

The members of your Standing Committee thought you should be aware of this.

The Presiding Bishop has done something which defies explanation. This is the Christmas card she sent to Bishop Iker and presumably other TEC bishops. Given the increasing polarization in TEC (and the Anglican Communion) today, the only reason we can see for her to make this choice is that she is only interested in pushing the polarization just that much further.

The Presiding Bishop is an intelligent woman, so this reinterpretation of Scripture to exclude masculine images must be intentional. This card illustrates in many ways the core problem of the General Convention Church. Scripture cannot be made to conform to us, we must conform our lives and our faith to Scripture. We will continue to stand for the traditional expression of the Faith.

The Standing Committee of the Episcopal Diocese of Fort Worth

Given the many cultural permutations of the story of the Magi, one might wonder what the problem is. The letter says that we must conform to Scripture, rather than make Scripture conform to us and our preferences and tastes. Fine.

But one of the ways we conform to Scripture is to let it infuse us, challenge us, change us. The image of the card allows us to look at the story of the Magi's visit with new eyes. It is not saying that the Magi were, or should have been, women. It is not a retelling of the story or changing the nativity...it is a reflection on the meaning, depth and power of the incarnation and our response to it.

Here is the story as Matthew writes it (NRSV):

In the time of King Herod, after Jesus was born in Bethlehem of Judea, wise men from the East came to Jerusalem, asking, "Where is the child who has been born king of the Jews? For we observed his star at its rising, and have come to pay him homage." When King Herod heard this, he was frightened, and all Jerusalem with him; and calling together all the chief priests and scribes of the people, he inquired of them where the Messiah was to be born. They told him, "In Bethlehem of Judea; for so it has been written by the prophet:

`And you, Bethlehem, in the land of Judah,

are by no means least among the rulers of Judah;

for from you shall come a ruler
who is to shepherd my people Israel.'"

Then Herod secretly called for the wise men and learned from them the exact time when the star had appeared. Then he sent them to Bethlehem, saying, "Go and search diligently for the child; and when you have found him, bring me word so that I may also go and pay him homage." When they had heard the king, they set out; and there, ahead of them, went the star that they had seen at its rising, until it stopped over the place where the child was. When they saw that the star had stopped, they were overwhelmed with joy. On entering the house, they saw the child with Mary his mother; and they knelt down and paid him homage. Then, opening their treasure chests, they offered him gifts of gold, frankincense, and myrrh. And having been warned in a dream not to return to Herod, they left for their own country by another road. (Matthew 2:1-12)

Here is our most beloved take on this passage:

We three kings of Orient are
Bearing gifts we traverse afar
Field and fountain, moor and mountain
Following yonder star

Born a King on Bethlehem's plain
Gold I bring to crown Him again
King forever, ceasing never
Over us all to rein

Frankincense to offer have I
Incense owns a Deity nigh
Pray'r and praising, all men raising
Worship Him, God most high

Myrrh is mine, its bitter perfume
Breathes of life of gathering gloom
Sorrowing, sighing, bleeding, dying
Sealed in the stone-cold tomb

O Star of wonder, star of night
Star with royal beauty bright
Westward leading, still proceeding
Guide us to Thy perfect light
In the Bridge Building Images on-line catalog, in addition to the card that +Katharine Jefferts Schori sent out, they have this thoroughly male take also with a large dollop of reinterpretation at work. Perhaps this would have been more to Fort Worth's liking? Here is what the accompanying blurb says: 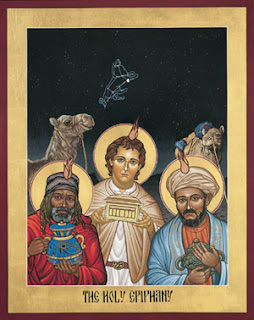 While oftentimes conflicting lore muddles the story of the Magi, those bearing gifts for the Christ child in this icon are Caspar of Tarsus, Melchior of Arabia and Balthasar of Saba. Weary from desert travel, the Magi humbly offer their gifts. Caspar is young, European and offers gold. Gold finances the Holy Family's coming flight to Egypt and also symbolizes Christ's immortality and purity. For his generosity, Caspar receives the gifts of charity and spiritual wealth. Melchior is middle-aged, Persian and offers myrrh. Myrrh is a fragrant gum, which the ancient Israelites believed to strengthen children. This symbol of Christ's mortality was blended with wine and offered to him on the cross, and also mixed with aloes to wrap his body for the tomb. Melchior receives the gifts of humility and truth. Balthasar is elderly, Ethiopian and offers frankincense. Frankincense is a resin used in incense for worship and also symbolizes prayer and sacrifice. Balthasar receives the gift of Faith. And Christ, humbling himself to become man, offers us the greatest gift of all, the light that forever burns in the darkness.

In Holland, kids put out shoes for the wise men. Latino cultures have a rich tradition around "Tres Reyes." The hymn I quote was said to have been written by the Rev. John Henry Hopkins for the Christmas pageant at the General Theological Seminary. Imagine the story without the traditions.

Tradition re-tooled Matthew's account into a story of people gathering from all over the world Europe, Asia and Africa to pay homage to the Infant Jesus. Tradition retooled the story to expand the meaning of the gifts. Tradition specified the number of magi to three. Tradition made them into Kings and gave them names. I know...Rowan Williams said all this and got into trouble, but look at what the traditions teach us along with Scripture.

Many of the reinterpretations emphasize the presentation of the gifts of the Magi to the infant Jesus, which is only a small part of the story. The heart of the story is that the appearance of the Magi rocked the security and the power of Herod, who tried to trick the Magi into revealing the whereabouts of the Messiah. The upshot of Matthew's story is that Herod knew the prophesy, and he knew the implications of the Magi's quest, and he tried to use his earthly power to thwart God's purpose. We don't add verses to sing about the massacre of the innocents which Matthew tells us is Herod's next dreadful attempt to stop God from meddling with the way things are.

The sweetness of the story as we tend to know it can hide the risk and terrible cost of listening for God and bringing gifts to the Messiah that is at the heart of the Biblical telling. Perhaps the only way we can get to that level is to shuffle the images around from time to time. I think an African Mary, and female Magi of color are a good place to start.

The folks in Fort Worth say they are mad about Scripture being reinterpreted. But the story itself has an amazing (and rich) story of interpretation! In fact, were it not for that history, the story would not nearly be as lovable--or lovely! But there is reinterpretation and then there is meddling. Clearly, the good people in leadership in Fort Worth don't want to go there.

Okay. So the card is not their cup o' tea. Why have they chosen to take public offense?

Is that really so threatening? For some people it clearly is.

(Besides... we all know that if the Magi were really women, they'd have brought much more useful gifts!)

Here is what others say:

Shocked! Shocked, I tell you! Imagine believing that the Grace of God matters more than the Gonads on the Guys! How dare she? Defies explanation only begins to describe it ... because what Katharine Jefferts Schori has really done is defy not explanation but the patriarchy.

And there's only one response to that ... THANKS BE TO GOD!

Katie Sherrod (who lives in the diocese) says this in her blog Desert's Child: Can't Even Swim :

The only decent comment in this statement from our Standing Committee is "The presiding bishop is an intelligent woman." It goes rapidly downhill from there.

Here's how these men and the women who follow them see the world:

First of all, there's the phrase "wise women." This is an oxymoron as far as our leadership is concerned.

Then there's the statement that women know themselves to be seers of the Divine. Who are we kidding. Only men get to see the Divine. Women can only have authentic encounters with the One Who Saves through the male priests who lead them.

And then there are the heretical statements -- "Epiphany proclaims again and anew: Christ for all people. God's favor extends to all!"

Not in the Gospel according to the FW Standing Committee. Christ is for straight white males and the males of color who agree with them. God's favor extends only to those these males deem worthy.

What's the difference between a joke and a memo from the Bishop and Standing Committee of Ft. Worth? One is so funny you'll laugh till it brings tears to your eyes; the other just makes you cry.

Notice that the second icon I refer to above, "The Holy Epiphany," is equally subversive.

Consider where the artist has placed us, the viewer of the icon. The magi face us; present their gifts to us. That puts us in the place of Jesus or Mary.

The reassuring image of three traditional male characters is thus overturned and puts us in the place of the ones receiving the gift...and all the cost that those gifts have traditionally pointed to.

The image utilizes both traditional iconography motifs and western motifs to put us in the place of Christ. The artist is reinforcing that in the incarnation things heavenly are joined to things earthly, and that, in our baptisms, we carry the identity and mission of Christ into the world.

Our former rector once preached that the three gifts represent a Passion Gospel in a walnut shell: gold for kingship, frankincense for diety, myrrh for death, a king who is God who will die.
A particularly beautiful interpretation of this passage is the Christmas carol-anthem "Here is the Little Door," words by Frances Chesterton, music by Herbert Howells. In the first verse we offer gifts to the sleeping Christ child. In the second, He opens his eyes and returns gifts to us, reinterpreting them in the process, in my opinion.
Listen to any recording and, if you listen with dry eyes, you're a stronger person than I am.