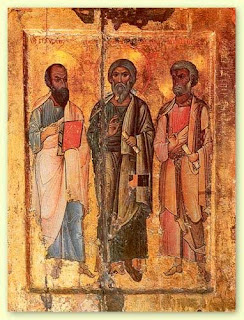 Of course, that’s precisely the problem. Our religion can seem hectic and pretty dysfunctional, if all you see are the headlines. Here is what people who believe and may even have a basic understanding of the basics of the faith know about the church: they know that churches fight a lot…over morality, over sexuality, and they split from each other a lot. They know about famous evangelists who have secret affairs or who condemn homosexuality while they engage in secret, risky sex. They hear about bishops who cover up priests who abuse children. They see churches where people get really really angry and upset over issues many people under thirty take for granted. And then to top it off, they may hear one of us complain about the pastor, the committees, the apathy, and on and on.

If that is all we know of the church…then is it any wonder that people who seek belief would rather go to the spiritual marketplace—to the internet and the bookstore-- and pick and choose what works for them and go it alone?

Well, besides a nervous wise crack…what can we seriously say to people outside the Church who say that they believe in God and believe themselves to be spiritual but don’t like organized religion?

Well, this may sound strange, but here is what I would say: Come and see. I know it sounds kooky. But I have it on good authority that this approach has worked before. The Gospel of John offers a few choices examples.

We see the John the Baptist and when he sees Jesus, he says “There is the Lamb of God.” And then he tells his story: “I saw the Spirit of God descend on him like a dove and remain on him.” This is he of whom I said, `After me comes a man who ranks ahead of me because he was before me.' I myself did not know him; but I came baptizing with water for this reason, that he might be revealed to Israel."

In this Gospel, John the Baptist believes and tells the story.

Later on, John sees Jesus and says it again “Look! There goes the Lamb of God!” Two of his disciples, including one named Andrew, split off and follow Jesus. Well, at first it looks as if they are shadowing Jesus, because eventually Jesus turns around and confronts them. He asks them “What do you seek?” They want to know where Jesus is staying. And after staying with him for a while, getting to know Jesus and hearing him speak, Andrew goes and finds his brother Simon.

Andrew says to Simon, “We have found the Messiah!” And the Andrew brings Simon to Jesus. Jesus knows all about Simon and about how he can be as thick as a brick and loyal to the core, so he says “You will be called ‘Peter’ (or ‘Cephas’ or ‘The Rock’).”

That’s how it goes in this part of the Gospel of John: people meet Jesus and believe, and then they tell their story. Notice what they are not being invited to. There is no transaction or bribery or desperation here. Andrew did not invite Peter to save his church from bankruptcy or to fill a vacancy on the vestry. There is simply the invitation to meet the Christ. And then God does the rest. Andrew won't see through to Peter's heart. Jesus will. It is not Andrew who will change Peter's life and call him to a new life. Jesus does that. What Andrew does bring is joy and wonder, amazement and faith.

So what would you say to that 90-95% who believe in God and who say they are spiritual but are not religious? I don’t know about you, but I would say “come and see!” Come and see…what?

Well, here is just a little bit of what I have seen.

I have seen a woman in her 80’s who was widowed not so long ago not only deals with her own illnesses with grace and strength, but who continues to care for her family and friends despite her own discomfort and uncertainty. This is a person who, when I go to visit, makes sure she hears about everything I am up to and my family and my parish.

I have seen a man in this parish who loves music so much that he invites all his friends to come to our church and perform no matter how polished or how amateurish their music is…just for the love of the music.

I have seen a single mom not only bring her son to church, but two of his buddies also. She does this because the grandmother of the two friends who used to bring them to her church passed away.

I have seen people get married here, baptize their children here, support each other through hard times and family strife here, work and play here and help each other grieve here.

I have seen a son and his brother give up huge chunks of free time (including time that might be spent here on Sunday mornings) to care for their aging parents and see to it that they can stay in their home as long as possible.

I have seen people get in cars and drive meals around to those who can’t go out, and then I have seen these very same people leave this church and get in their cars to people in our parish who can’t get out to bring them the Sacrament of Christ’s body and blood.

I have seen us get very silly raking leaves and painting walls with whimsical pictures and folding newsletters. I remember how crazy it was when a nor’easter left a 10 foot high glacier in front of our door that needed to be moved by the next day for worship.

I have seen people come here with all of life’s uncertainties and cares and triumphs and hopes come to this place, to this table and together eat blessed bread and drink poured out wine, to go back in to the world to faithful signs of God’s extraordinary love being made real in ordinary people every day.

When I want to bring people to Jesus and say “Come and see!” I want to show them…you.

While the news and the media only talk about what’s broken, I want to show them what works. I want to show them where God shows Godself best: In relationships, in community, and in ordinary people leading grace-filled lives one day at a time. I will not show them perfect people, or people who have all the answers or who have figured everything out. Instead, I will show them faithful people. People who have met Jesus, and know it or not, show Jesus off. People who believe and then tell the story.

I would say to that 90% who say they are spiritual and not religious is that you are only going to go so far doing it all by yourself. I would say to that 90% that religious faith…spirituality…does not begin about what makes me feel whole, fulfilled, answered, comfortable, wise…but begins when we open our hearts to Jesus and look for the face of God in the everyday. I would show that Christian community that does many great little things to make the world a better, more humane—more divine—place than what we started with. Those things we think we can get alone…answers, fulfillment, wisdom, comfort…it turns out that they are the fruits of a life spent with a heart open to God and lived in community with others.

And I would say to the 90% who only see the buildings, or hear about the committees or focus on the money it takes to operate this little corner of God’s kingdom, that these things are important only insofar as they serve those who seek and serve Christ in the everyday. As we make space possible for everyday people to find and meet the Christ, our work is not drudgery but invitation to something greater.

Come and see! That’s what I would say. And I invite you all to look around and look into yourselves and to see for yourselves what God sees in you. How has your life been enriched, changed, and expanded because of your relationship to God in Christ and with Christ’s people? If someone were to ask you why you bother…would you just leave it as a life-style choice, shrugging and muttering “to each his own?” Or would you tell the story and then invite someone to “Come and see!”

We have seen the Messiah! And he lives and works and walks in this community of frail and funny, growing and wonderful baptized people. Come and see!

Very nice. Truly, the Church is at its best when its being Incarnational. Thank you.

Wow. What a post. I love the come and see appeoach. However, I am in a conversation now with a few that "sickens" me. Rgey feel the need to beat them over the head, because they may not live to "see" the see moment.

It IS hectic and dysfunctional. Thats because we are in it and only we with God's grace can make it better.

(BTW...I love your Simpson-ized portrait! I want one!)