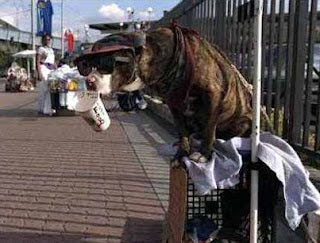 There an old 'Far Side' cartoon that shows a dog on a unicycle, riding on a high wire, and he is juggling while balancing a fishbowl on his head. The caption reads, 'Rover couldn't help thinking that he was an old dog and this was a new trick.'

So, here’s the question: is the old saying correct? Can you really teach an old dog new tricks?

Now, I don’t know about you, but I am inclined to think not. I mean, my spouse has periodically reported to me her sense that I can be rather particular and habitual in my preferences. Every now and then I find myself muttering something like “who’s been messing with my stuff?” And I have to admit, that I firmly believe that God intended for a certain order in the universe…after all, if God wanted us to change he would not have put pre-sets on the car radio.

But appearances can be deceiving. So can assumptions. And a close, if grudging, reading of today’s Gospel leads me to believe that Jesus would answer “Yes! You can teach old dogs new tricks.”

The Gospel of Matthew tells us that when Jesus goes out to look for disciples…followers and apprentices… he does not go to the synagogues, nor to the Temple. He does not go to where religious people study to be religious professionals. Instead he goes to less obvious, but perhaps more welcoming places. He goes down the seaside, and he finds fishermen and laborers. Later on in the Gospels, we will read that he will find tax-collectors and political radicals…in other words, both people who go along to get along and people who rebel against the machine. His followers will include women who own property and have standing in their community like Mary and Martha and they will be prostitutes and women who were in need of healing and who were ritually unclean. He will draw to himself great Rabbis, sometimes by night, and even Roman soldiers.

Jesus will call people from every walk of life to come and follow him. In fact, Jesus is very careful to deliberately include in his band people who are from opposite walks of life.

But for all their diversity they will have one thing in common. They will be, as it were, old dogs learning new tricks.

That’s discipleship for you. Being a friend and apprentice of Jesus Christ is like being an old dog learning new tricks.

They say it can’t be done. We old dogs are too stubborn, too set in our ways. They tell us that we have become to used to doing things the way things have always been done to really, deeply change. Well that may be so…but Jesus has this way of calling us and meeting us at exactly the point of our greatest need and, if we choose to listen and follow, take us to places we never imagined.

All through the Bible, we encounter stories like today’s Gospel: stories of God coming up to a person and picking them out to go and do something new. We think of Abram being called in old age to be the beginning of a new, chosen people. We think of David, a shepherd boy picked to be the King of Israel. In each of these is a story of God starting something new and unexpected. God calls this person to begin something new. God’s call changes them and also empowers them so that when they respond to God’s call they may not only responds but persist and grow in their calling so that other new beginnings can take place.

In today’s Gospel, Jesus is one doing the calling. He walks up to Peter, Andrew, James and John while they are working and says “follow me! I will make you fish for people!” These two sets of brothers are doing their jobs, probably doing the same job their fathers did and their father’s fathers did…they were fishermen…going through the rituals and habits of working life that they had always known, living off the rhythms of sea and land. And Jesus is going to teach them something new…he is going to teach them some new tricks.

They will follow Jesus, and discover that God is at work in the lives of ordinary people everywhere. That God is drawing people into new, reconciled, healed relationships. That God’s grace is not limited to the special few but available to everyone. They will find that God’s special favor begins with the people of the Covenant, and will now extend to everyone. They will find that death is not the end of life, but that God will conquer it. They will see and meet people who they probably believed were outside of God’s family be welcomed into it.

We are all called to be disciples. We are all called into friendship and called to be apprentices of Jesus Christ. We might think that we have learned all there is to know, and that life consists of putting one foot in front of another, bumping from event to event, maybe even crisis to crisis. But God knows something more about us, that we are capable of so much more both in our hearts and in our actions. And so he starts with us as we are and where we are, and calls us to do and be more.

Like Peter, Andrew, James and John, we are like old dogs being continually being taught new tricks.

Now habits are not all bad. (This is not just the old dog talking….) Habits can help us cope and also help us function when things are unpredictable. That’s why firefighters and nurses learn protocols. And even spiritual directors teach us how to cultivate holy habits of the heart. But this is God using how we are already wired to God’s greater purpose.

The temptation is to always do things the way we’ve always done them; or, when we find something that works, to stick with it, and never, ever learn to listen for where the habit is taking us. We are tempted to make something exciting and new into something repetitious and routine. As I said, God knows this about us, and so takes even that built-in tendency and gives it a kind of judo throw. God will take our need for routine and give us the tool of prayerful rhythm, and worshipful time. God will give us the ability to create habits and the ability to reflect. And these, strangely enough, can become the some of the tools of our transformation.

As we develop a habit of prayer, of listening for God, we will change our perspective and develop new vision. As we become used to the idea of serving others, we will begin to see the face of Jesus in faces we would not expect. As we become used to living in community, we will be renewed by finding that we are not alone, but accompanied in meaningful ways through all of life’s changes and chances.

God teaches us new tricks all the time. The challenge is for us to listen to when Jesus calls. He will meet us at the point of our greatest need, and find us in our most ingrained habits, our most stubborn opinions, and our most unwavering assumptions and call us to something new. It will feel strange. Like being called away from something we’ve always known into something exciting and real.

There are times when it feels as if it is all we can do to keep juggling what we have always juggled. It can be disturbing to hear God take us in new directions. It might seem like we are adding a fish bowl or a spinning plates to the mix. Following Jesus’ call only starts out feeling like teaching an old dog new tricks, when in fact, it is an invitation to go with God into a marvelous adventure of possibility, service and transformation!