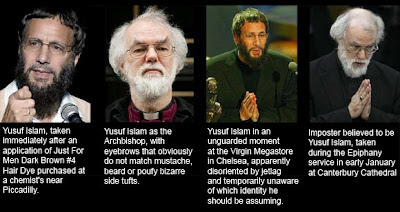 Breaking news revealed by the Wittenburg Door! According to them, an activist group knows as Citizens Against Muslim Political Infiltration (CAMPI) has produced evidence that the Archbishop of Canterbury is actually Yusaf Islam, the singer formerlly known as Cat Stevens, in disguise!

The unmasking of this Manchurian bishop should explain a lot, especially if you have a particularly conspiratorial mind set, about the so-called sharia speech.

Commenting on Williams' recent statements endorsing the adoption of Sharia law to maintain "social cohesion" in Britain, CAMPI spokesman Martin Brentwhistle noted the archibishop's “scary, obviously false eyebrows,” then presented photographs of the famous singer that were at first mistaken for the Anglican leader. He also referenced a YouTube video of Archbishop Williams bursting into a rendition of "Morning Has Broken" while conducting a service at St Paul’s Cathedral.

“The substitution was incredibly easy to perpetrate,” said Brentwhistle. “All they had to do was die his hair gray and tack on the fake eyebrows. Cat Stevens is a Londoner, so he already had the accent. This is the latest in a long series of attempts by radical Muslims to infiltrate and control British society.”

Literature distributed by CAMPI also referenced the 1993 movie Dave, in which the American President suffers a fatal stroke and is replaced by a look-alike. The brochure encourages concerned citizens to approach the Archbishop and ask him to autograph Cat Stevens CDs as a means of “flushing out the imposter, and letting him know we’re onto his little charade.”

We now return you to our regularly scheduled controversy.
Posted by Andrew Gerns at 8:45 AM