A case study in nerve failure 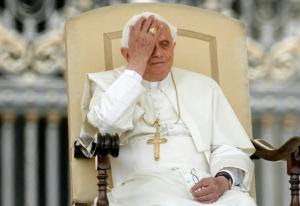 Maybe they should teach this someplace. When one becomes a new Bishop, or a Primate, or even a new Pope (or for that matter a new parish priest!) maybe they should go to school and learn that there is no appeasing extremists. No matter how good your intentions, you will never be good enough for people who settle for nothing less than total capitulation. No matter how much you give them, they will want more.

You can concede that on some things they may have a point, but they will want to concede that they are right on everything.

You can acknowledge that their stand rests in history, but then you will get beat up for not turning back the clock.

You can agree with them that rules must be enforced, but God help you if you enforce the rules on them

This story in the Reuters blog FaithWorld by Tim Heneghan is a case in point.

Pope Benedict is “an absolutely liberal pope.” The United States is “founded upon Masonic principles of a revolution, of a rebellion against God”.

It is clear that the man who made these comments has lost some connection to reality. If I told you he had been the target of a Vatican charm offensive in recent years, you might think I had lost a link to reality, too. However, it shows how strange the relationship between the Vatican and the schismatic traditionalist Society of Saint Pius X has become that its head, Bishop Bernard Fellay, could utter the words quoted above.

Fellay, whose SSPX movement champions the traditional Latin Mass and wants the Roman Catholic Church to turn the clock back to before the Second Vatican Council (1962-1965), thought its star was rising after the election of Pope Benedict three years ago. Benedict has gone a long way to accomodate the SSPX’s liturgical demands, bringing back the Tridentine Mass despite the fact very few other Catholics were asking for it. He has agreed to a new Latin Good Friday prayer that restored traditional phrasing even though it was offensive to Jews (and still not enough for the SSPX). Even Benedict, for all his conservative views, refuses to roll back the reforms of Vatican Two wholesale.

The Swiss-based bishop used the occasion of Benedict’s successful U.S. visit (April 15-20) to issue a declaration of disappointment that the pope was not giving in to his demands. His latest complaint, delivered on June 1 at the Paris church the SSPX has occupied since 1977, is a frustrated outburst that raises the question of whether the Vatican should expend any more energy talking with this group.

Here’s the key quote from his sermon (click for the original French text and the audio file in French):

“And now, we have an absolutely liberal Pope, my very dear brothers. He went to this country [the United States] founded on Masonic principles of a revolution, of a rebellion against God. And, well, he expressed his admiration and fascination for this country that has decided to grant liberty to all religions. He went so far as to condemn the confessional State. And they call him a traditionalist? Yes, this is the truth. He is absolutely liberal and absolutely contradictory. He has some good sides, which we hail and for which we rejoice, such as what he has done for the Traditional liturgy. What a mystery, my very dear brothers, what a mystery!”

Since my orders are utterly null and void anyway, I am happy to leave this headache to the Pope. But this story is a helpful illustration of some basic lessons that anyone in religious leadership has to learn sooner or later:

Fr. Andrew ... I disagree heartily with any conclusion that traditionalists and others cannot live together in mutual respect and admiration, as well as join together in social ministries and like functions.

Praise God that we live and minister in a Diocese which not only accepts both viewpoints, but celebrates our differences. Our traditionalist ministry, without the strength of your ministry and others, would be far weaker.

Yes I want respect, and far prefer admiration to mere acceptance. However, I also offer that which I want and need.

Be in peach, and know that our prayers go with you (and yes, in Elizabethan English) and each minister within this Diocese. While our differences could create a chasm, our mutual respect, forebearance, and admiration build bridges.

Fr. Andrew, as an Anglican traditionalist, I thoroughly disagree with any conclusion that I ask that which I am not willing to grant.

Yes I want acceptance, but more than mere acceptance, I want encouragement and, when due, admiration. Praise God that all of that is available to those of us who minister within this Diocese.

I have not been merely accepted by our Diocesan, I had been repeatedly encouraged by him. Now, that warms the cockles of my little old traditionalist heart enough that it frees me to join in social ministries, and such, with other parishes who worship and accept Christ in ways very foreign to me.

Our differences could create a chasm, Andrew ... but our mutual love and forebearance build bridges to joint and holy ministry.

I love both your replies and am sorry that there are too many hoops to jump through. Thanks for your persistence.

Now, I know I am open to this criticism because I am often hard on traditionalists in this space, so to the extent that I deserve it, I accept it.

On the other hand, the witness of your congregation and the laity that I have worked with from it in this diocese reinforces what you say in both comments.

The problem with bullies and nerve-failure has nothing to do with whether a person is traditional or progressive, realinger, reappraiser or reasserter. The problem has to do with people.

Some time, Father, I would like to sit down and tell some of my stories of being bullied by progressives both as a person and as a parish priest. The same conclusions apply.

It may appear easier to crack down on bad behavior if it so happens that the person exhibiting also disagrees with you on some basic issue, but if we love Christian community, desire to follow Jesus and honor God, it is essential that Christian leaders differentiate between their tastes and personal preferences and what is best for Christian community.

Being a responsible Christian leaders--lay or ordained--requires a good deal of sacrifice, a healthy wariness of pride, and the ability to listen. Doing that and allowing the community to be abused requires strength and nerve that I think comes only from the Grace of God.

Blessings to you and to all God's people at St. Stephen's Whitehall!