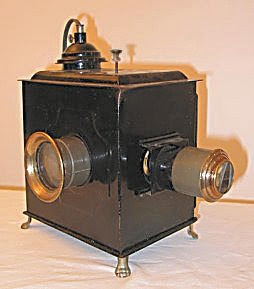 I miss epiScope. More precisely, I miss the old epiScope.

epiScope is a blog that was started on February 1, 2007. On that day, it described itself this way:

“An episcope is an optical device for projecting flat opaque images, like postcards, prints, photographs, pages of books, but also three-dimensional objects like coins, insects and leaves, on to a screen. The object is usually placed upside down, mostly at the rear of the lantern, sometimes at the bottom or top, as the image will be inverted by the projection lens. An intense light, often from two sources, illuminates the object from the sides. A part of the reflected light passes the projecting lens which projects an image on to the screen.” In other words, it’s what we used to call an “opaque projector.”

That sounds like a pretty good thing for a blog to do: “project flat images and three-dimensional objects onto a screen, often illuminated by an intense light from at least two sources.”

At the very least it can bring some of the issues and people into better focus, illuminate them, and perhaps even render them a little less opaque ... as we continue looking over the Episcopal Church.

"We," by the way, being the reporters and editors of the Episcopal Church's Office of Communication.

Mostly we'll track references to the Episcopal Church in online media ... provide links to full documentation and source material ... do a little "rumor control" where it's needed ... provide a moderated forum for public discussion of substantive issues raised by stories and opinion pieces... and provide a way for the wider Episcopal Church, the Anglican Communion, and the general online public to interact more directly with ENS and Episcopal Life writers and others at the Episcopal Church Center in New York and on the road.

It is the tracking of references to the Episcopal Church in the media that I miss the most. epiScope was one of the first blogs I checked every day. Even with my Google newsfeeds and RSS feeds, epiScope always had something interesting.

I really appreciate being on epiScope's blogroll. I consider it something of a badge of honor to have been listed with this august group of Episcopal and Anglican bloggers. The idea that the folks in the Episcopal Church's communication office cared to even notice, let alone follow, the work of us ordinary electronic wordsmiths was a sign that our vision for communicating the Gospel through the life and work of the Episcopal Church had grown.

The blogroll, along with various local and national stories, taught us that communicating the Gospel is about much more that talking points and news releases. It is a conversation, where we listen to the world, tell the church what the world is feeling, dreaming of and worried about, and then respond with the Good News of Jesus Christ. Sharing Good News is not a one way street.

And, as both a blogger and a member of the newsteam at Episcopal Cafe, when the blogosphere was hot and heavy with some piece of news, epiScope was there to remind us that other things were happening in the Episcopal Church and it even made news, even if it was in a small local paper.

The pithy corrections of common errors were information, reassuring (no I did not read that wrong) and amusing.

epiScope filled a nice niche between Thinking Anglicans, TitusOneNine and The Cafe, on the one hand, and the many, many individual blogs in the ever-growing Anglican blogosphere. It was different that Anglicans OnLine.

If The Cafe, T19 and TA are the "All Things Considered" of Anglican/Episcopal blogs, and if AO is the Sunday Times (without the crossword), and the rest of us bloggers are the talking heads, special interest forums and local op-eds, then epiScope was the invaluable news-round up.

Blogs being what they are--often subjective and seldom under editorial review--epiScope went a long way towards keeping us all honest and fair.

All of the blogs I have mentioned, no matter how good they are, have a point of view, but epiScope's point of view was unique. It was the point of view of how others see us. Having an epiScope to project was opaque in front of us said that we weren't ashamed or embarrassed by the routine errors, misconceptions and misunderstanding of the secular and religious media who don't often "get" us. To know how we are being seen by the media is big step to helping us figure out how to articulate the Gospel more clearly in the real world.

Now I don't mind that epiScope would be used by our Communications ministers to get something important out there from the Episcopal Church out to the rest of us. I am just sorry that all the headlines and news reports from around the country are no longer being posted.

That information exists. I already mentioned Google and RSS newsfeeds. But, if you are an official Episcopal communicator (instead of the underground and unofficial ones as many of us bloggers are) there is a daily digest of links and headlines mentioning anything and anyplace that mentions the Episcopal Church in it. This little round-up appears to have been the guts of what made up the old epiScope. But if you don't subscribe or have it forwarded to you, then you have to use the feeds and get it yourself. epiScope made this perspective available to one and all.

So here's to epiScope. Thanks for the official stuff from HQ! Keep it coming! But I have to say that I really miss the little stories, the local perspectives and everyday signs that serving Jesus day in and day out in our local Episcopal churches is not only Good News but is, in it's way, newsworthy.
_______________________

I'm with you, Andrew!

Something important has been lost with the death (or dismembering) of EpiScope.

Plus many of the web links on the "Eyes-Left -Center -Right" are broken. they are not being maintained.