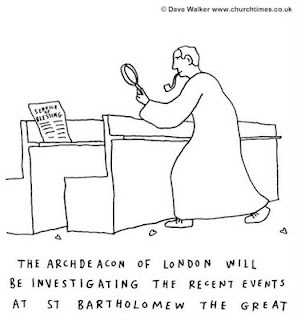 Martin Dudley, rector of St. Bartholomew the Great in the City of London, explains in The New Statesman why he officiated at the blessing of the civil union of the Rev. Dr. David Lord and the Rev. Peter Cowell. The ceremony has met with controversy because the language of the rite hews closely to the form of marriage used in the Church of England (1662 BCP, with , leading many to call the service a marriage ceremony. Read more here, here, here, and here. A link to a PDF of the ceremony may be found here.

So on a day late in 2007 when my friend and colleague Peter Cowell asked me to bless the civil partnership that he was to contract with David Lord in May this year I was ready to answer “yes”. I did so not to provoke the so-called traditionalists and to deliberately disregard the guidelines published by the English House of Bishops, not to defy the Bishop of London, whose sagacity I respect, or Archbishop Rowan, who I have known and admired for 25 years, but because to respond in any other way would have been a negation of everything I believe, of everything that makes me who I am, as a man and as a priest.

We were in unchartered territory, seeking to find the words that would express the love of Peter and David and their commitment to each other. New words could not carry the burden and we turned to the old, to words shaped by centuries of use, redolent with meaning.

This bringing together of two men would be like a marriage but not a marriage, for I am clear that marriage is between a man and a woman, and the words I will say must be said with integrity. The words, vow and covenant, binding and union, were put under tension, slipping, sliding, perishing. They were imprecise, transferred from one relationship to another. We could not speak of procreation but we could speak of “the mutual, society, help, and comfort” that the one could have of the other, of loving, comforting, honouring and keeping, for these are good words and not limited to or by marriage.

On 31 May, my birthday and the feast of the Visitation, when Mary said “My soul doth magnify the Lord”, 300 people gathered in St Bartholomew the Great to celebrate the Eucharist, to witness Peter and David commit themselves to each other in an exclusive loving relationship.

Amazing flowers, fabulous music, a ceremony both solemn and oddly homely, familiar words reordered and reconfigured, carrying new meanings. Nothing jarred, nothing felt even vaguely inappropriate. New and untried but not wrong. Not a gay rally or demonstration, but a truly joyful celebration.

It is not we who have whipped up the whirlwind, replacing words of love and inclusion with those of hatred and exclusion. We set out to express, experimentally, pushing at boundaries, a love of a type which is not unusual or perverse but which is perfectly ordinary and accepted outside the Church. Why, then, can it not be accepted inside the community that is based, not on law, but on the loving presence of God in Jesus Christ?