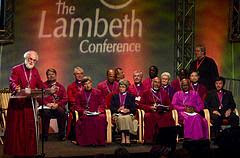 I am the Monday newshound for the Episcopal Cafe. The Lambeth Conference has just finished up and the Bishops are all on their way home. Today I wrote a summary of the Conference with some initial thoughts about what went on, where we are going and what it might mean. Check it out here.

Here are some snippets:

In many ways the Lambeth Conference had dual personalities. There was the listening, engaging personality of the Indaba groups, along with the Bible Studies, the worship. Then there was the organizational side where the Archbishop of Canterbury, the Anglican Communion Office and the Bishops attempted to find a structure by which the Communion could hold together.

So the Conference had two parallel processes going on: the Indaba process and the Bible Studies with the backstage process happening concurrently. Folks backstage would develop documents and possible solutions, sending them down to the groups for feedback. It appears that the documents being considered that the realities of the discussions were not always in sync. The final production of documents happened backstage and was again presented to the Bishops without any way for the whole group to reflect or agree on the final document.

Which leaves open the question of which process will be remembered: the Indaba or the papers? And of the two, which will have more lasting influence as the Communion attempts to address both our divisions and our mission?

Watching all of this unfold, whether in person or on line, has been a little like (to coin a phrase) touring a sausage factory. The Indaba groups, the presence of Bishops blogging their own experiences as they occurred and the need for journalists to file stories showed that this could have been either the last modern or the first post-modern Lambeth Conference. It will take some time to sort out what all of this means.

The Primates will soon gather and in September, the House of Bishops of the Episcopal Church will come together to reflect on their experience and to address a few structural issues of our own.

It is too much to expect that an entirely appreciative approach would ever replace an entirely proscriptive approach, so perhaps it was inevitable that Lambeth would have had two personalities. It may be that the most significant contribution to the future of the Anglican Communion is that, by risking to emphasize listening and engagement as the heart of what it is like to be in communion, it will be much harder to impose purely legislative solutions on the whole Communion.

Read it all here.

Here is Bishop Michael Ingham's podcast to his diocese, New Westminster, which describes the dual nature of the Conference and his experience of it. What he says to his diocese applies to all of us: we must consider deeply the implications of Lambeth and continue to pray.
Posted by Andrew Gerns at 12:01 PM