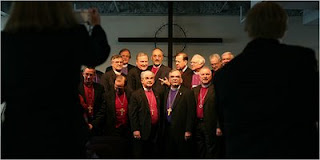 Here is what Episcopal Cafe says:

Contrary to news reports that a new North American province pledging allegiance to the Anglican Communion is being created today, such is not the case. It is not possible to unilaterally declare yourself to be a province of the Anglican Communion. The AP's early report is more on target: a new group is forming its own denomination which it says represents true Anglican beliefs.

WHEATON, Ill. - Theological conservatives upset by the liberal views of the Episcopal Church are forming a rival denomination.

A quick glance at their constitution says that the new denomination will not organize itself geographically but pretty much preserve the structures of the constituent groups.

Here are the groups which make up the new denomination:
The group is so scattered that this may not have much practical effect, but it is conceivable that one could see multiple ACNA churches in the same area, all in different "dioceses" and under different bishops that correspond roughly to their former allegiance to a constituting group.

The New York Times says that

The founding members of this new province have major theological differences among themselves on liturgical practices, and whether to ordain women.

Bishop Duncan, whose theological orientation is more evangelical, has ordained women in the diocese of Pittsburgh. Bishops of other breakaway dioceses, like Jack Iker in Fort Worth and John-David Schofield in San Joaquin, are more “Anglo-Catholic” in orientation, modeling some elements of the Roman Catholic Church, and are opposed to ordaining women as priests or bishops.

Under their new constitution, each of the nine constituent dioceses or groups that would make up the new province could follow its own teachings on women’s ordination. Each congregation would also keep its own property.

Mark Harris over at Preludium has a detailed analysis of their constitution here.

ARTICLE IV – THE STRUCTURE OF THE PROVINCE

The idea that there will be overlapping dioceses with differences in polity is not entirely without precedent. Within Roman Catholicism there exists a tapestry of jurisdictions. Two examples that comes to mind are the parishes that are connected to religious orders that may or may not report to the Diocesan and the Byzantine Rite churches. The Byzantine Catholics have married clergy and an Eastern style liturgical tradition along with their own Bishops and diocesan structures that often overlap traditional diocesan structures.

But there are unifying factors that the new Anglican denomination in North America will lack. In the Roman Catholic examples I have named there is still the underlying, normative structure of the diocesan church that is geographically based under a Bishop. And, of course, all of these various forms of Roman Catholicism all recognize the Bishop of Rome as the person in succession to Peter as the head of the Church.

The ACNA does not seek or particularly value the recognition of the Archbishop of Canterbury. So they want to be Anglican without recognizing their ties to England. The ACNA is a church that brings together the former colonials in a way that dismisses the Church from which they sprang. In some ways, the ACNA is a throwback to what the Episcopal Church was before the first Lambeth Conference. A separate church with roots in the CofE, that's all. In some ways, the ACNA is a glimpse of what American Anglicanism might have looked like if the first General Convention had gone a different way.

But much more troubling is that the new denomination will have a purely functional view of the Episcopate. Bishops in the ACNA are merely ordaining and confirming machines.They can teach, but no one in the ACNA has to really listen to what he says let alone live under any discipline exercised by this confirming-ordaining machine. Individual congregations will get to pick whatever flavor of Bishop they want.

I suppose that if a Bishop wanted to set up a diocese, network or jurisdiction where lay presidency of the Eucharist was allowed, it could happen as long as he signed the Jerusalem Declaration and gave a passing nod to the 1662 BCP and the Articles of Religion.

Already, Bishop Jack Iker, the former Bishop of Fort Worth who has parked his mitre temporarily in the Province of the Southern Cone, has said that his Communion is "impaired" with any Bishop (ACNA or otherwise) who ordains women. This means that before the thing is even 24 hours old he is out of communion with the new Primate of the new denomination. Good start, guys. At least the Bishops will all be boys.

You see where this is going?

By tossing aside geographical episcopacy and by making each congregation free to stay within the ACNA at their leisure and choose the Bishop of their own liking, they have made the congregations (and the whims, tastes and preferences of their Rectors) the chief arbitor of church discipline and doctrinal authority. The congregation does not have to contend with anyone who doesn't agree with them, and the discipline that any Bishop might give is reduced to the level of well-meaning advice.

This will be a stove-pipe denomination where people who share a common hatred of the Episcopal Church can interact only with people who agree with them in the moment they need to agree with them. They will never have to wrestle with a Bishop as the personification of the unity of the Church...and so they will never discover the unity in Christ that is over and above the things which divide us humans. They will never discover the point of obedience that an episcopal structure in Anglicanism suggests: that we learn something of what it means to be obedient to God when we live in obedience to our Bishop in common with the congregations of our diocese and province, even (especially) when we don't agree.

But this group does not want the restraining influence of councils or of Bishops in any meaningful way. This denomination will allow people who think and act alike to stay only with each other and if one doesn't like the teachings of his Bishop or fellow clergy and congregations, he can just shop around for a new bishop, even, perhaps, a new denomination more to his own liking.

Of course, the personalities of most of these bishops is that, while they cannot accept discipline, they cannot tolerate dissension. So we'll see where that leads.

This group calls itself a province but appears to be indifferent to submitting itself formally to any process that make them an Anglican Province. They are a province because they are a collection of dioceses, networks and interest groups in a big geographical space between two oceans. Bishop Minn asks "who made England the center of the universe?" Okay, but in the ACNA universe the center is..what? The personal preference of the Bishop, priest or congregation?

For a while I called this potential new body "The Episcopal Church--Missouri Synod" referencing the conservatism of their moral theology and use of the Bible. I take that back. The phrase was an insult to Missouri Synod Lutherans everywhere. For one thing, the LCMS would never put up with the inherent lack of discipline.
Posted by Andrew Gerns at 6:37 AM

Thank you for this excellent comment about the latest revelation of the intentions of these breakaway churches. The unfolding gets more interesting all the time.

Your blog was sent to me and I am grateful for the work you have done putting this together. Peace.

Why is the target above their heads?

I believe the artillerymen call that "bracketing."