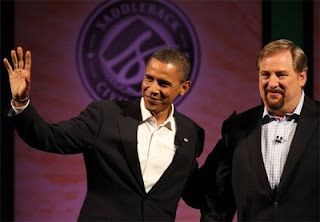 Updated. Martin E. Marty wrote the following for his e-newsletter "Sightings" published by the Martin Marty Center at the University of Chicago Divinity School. Marty poses the question of how Christians should communicate their religious convictions when it comes to social policy in the public square, especially when the public square exists in a pluralistic environment.

In other words, when a Christian is opposed to (or in favor) of a policy, is it enough to simply quote the Bible (as I or my group understands it), the magisterium, the Book of Common Prayer or some other religious authority that only my group recognizes? Marty says no. Not in a democracy. Apparently, he is not alone. At least among Chicagoans.

Long-time subscribers know that Monday Sightings does not "do" U.S. Presidents or presidential candidates, but this twilight moment after an election and before an inauguration provides me with another category, "President-Elect," which today's column will notice for an important reason. That reason? The approach to religion-and-politics proposed by President-Elect Obama in his "Call to Renewal" address on May 28, 2006. I may print it out and use my new Christmas-gift magnets to affix it to a refrigerator door as a text for morning meditations. Here is an excerpt:

"Democracy demands that the religiously motivated translate their concerns into universal, rather than religion-specific, values. Democracy requires that their proposals be subject to argument, and amenable to reason. I may be opposed to abortion for religious reasons, but if I seek to pass a law banning the practice, I cannot simply point to the teachings of my church or evoke God's will. I have to explain why abortion violates some principle that is accessible to people of all faiths, including those with no faith at all...Politics depends on our ability to persuade each other of common aims based on a common reality. It involves the compromise, the art of what's possible. At some fundamental level, religion does not allow for compromise. It's the art of the impossible. If God has spoken, then followers are expected to live up to God's edicts, regardless of the consequences. To base one's life on such uncompromising commitments may be sublime, but to base our policy-making on such commitments would be a dangerous thing."

Now, contrast this with a message posted by the Reverend Pastor Richard Duane Warren, with whom I have no motive to pick a fight. But I wish he would engage in dialogue with his friend, the President-elect, before and after Inauguration Day. Warren:

"As church leaders, we know our congregations are not allowed to endorse specific candidates, and it's important for us to recognize that there can be multiple opinions among Bible-believing Christians when it comes to debatable issues such as the economy, social programs, Social Security, and the war in Iraq. But for those of us who accept the Bible as God's Word and know that God has a unique, sovereign purpose for every life, I believe there are five issues that are non-negotiable. To me, they're not even debatable because God's Word is clear on these issues."

These have to do with abortion, stem-cell harvesting, homosexual "marriage," human cloning, and euthanasia. He chose these five, about which the printed Bible displays only a few inches of text that can even be used as inferences to support them, as "non-negotiable" themes. He shelves as negotiable the multiple yards of printed biblical texts on some social issues which to him seem negotiable. With the President-Elect I affirm that Pastor Warren's "uncompromising commitments may be sublime," but I do see that "to base our policy-making on such commitments would be a dangerous thing."

We Bible-believing Christians are offended when some Muslims base social and political policy on the Qur'an, or ruling parties in India, on texts from their holy books, since we do not accept such texts as "God's Word." What Pastor Warren and millions in his camp advocate works only in a theocracy, where the whole population accepts or is forced to accept one faith's "God's Word." I really, really would like to eavesdrop if the President-Elect and the Pastor were to converse about this question.

So this is Pastor Warren's position: it is possible for Christians of conscience to disagree about questions of war and peace, wealth and poverty, about which the Bible has much to say, and even about the roles of men and women in the church and the response of the Church to the government about which the Bible says less. It appears that we can even agree to disagree about slavery. But about abortion, stem-cell harvesting, homosexual "marriage," human cloning, and euthanasia on which the Bible says even less, these are to Warren "non-negotiables" among ourselves and therefore "non-negotiables" among citizens even if they are not our co-religionists.

Questions of realistic social policy and civil discourse aside, is this even Biblical? I don't see this view as jiving with, for one thing, Paul's instructions to his churches at all.