Yelling (or bombing) never reconciled anything 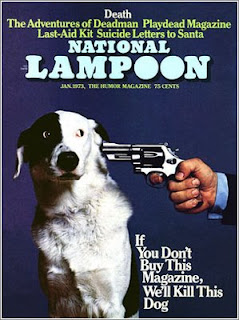 Maybe it's me but it looks like atheists are becoming downright evangelical. If they’re not careful, they might start haranguing and threatening us believers if we don’t see things their way. Oops. Maybe they already are. But right now, they rely mostly to sarcasm and condescension. But before you know it, they’ll be acting downright religious. One atheist has even resorted to mass-marketing.

Last week, an television writer who is also an atheist decided to buy advertising on London double-decker buses. The ads rolled out last week. The text says:
There is probably no God.
Now stop worrying and enjoy your life.
Well, you can be shocked, if you want, but we did this to ourselves. The creator of the atheist (or more accurately, the agnostic) bus ads, Ariane Sherine, said she decided to do this in response to another national ad campaign last June by a network of evangelical Christian groups. They also put evangelistic signs on buses and the underground. Evidently the ads, web sites and toll-free phone numbers all warned unbelievers that they were going to hell for their sins.

At least that’s what Ms. Sherine says she heard. I don’t know because the offending ads aren’t on the internet. But it would not surprise me. Christians often fall back on threats of hell or fear of death or fear of the unknown or anxiety about change all in an attempt to get people to sign up and follow the King of Peace.

I remember a New Yorker cartoon that showed something like an Aztec temple. You know: a pyramid with the steps and a big altar of sacrifice shaped like a skull. Two guys in feathered headdresses and medals are sitting next to each other with the chins in the hands. One says to the other: “I wonder why we aren’t getting new converts?”

The competing London bus ads show us that not only did threats and manipulation in the name of the Gospel not work, it provoked exactly the opposite response! The lesson here is that you don’t change people’s minds by yelling at them.

But it could be worse. Just as we cannot change peoples minds by yelling at them, neither can we bomb or terrorize our way to peace—as we are learning once again in Gaza. Have you ever noticed that when people’s safety is directly threatened they become more hardened and more determined? The Israelis know that every car bomb and every missile only hardens their resolve and yet they try to bomb their way to peace. Our Presiding Bishop, Katharine Jefferts Schori, said

Mohandas Gandhi and Martin Luther King, Jr. reminded the world that “an eye for an eye soon leaves the whole world blind.” May we seek to end this blinding violence.

She echoes the Bishops, Patriarchs and heads of Christian churches in Jerusalem who say:

We believe that the continuation of this bloodshed and violence will not lead to peace and justice but breed more hatred and hostility -- and thus continued confrontation between the two peoples.

And they ought to know. They live there and if anyone is caught in crossfire between dueling religions and nationalisms, it is the Christians of Palestine.

But there is another way and will be shown this way again and again during the season after the Epiphany. This is the season when we discover again how people first came to know that Jesus is the Christ, the Son of the Living God.

Over the next several Sundays, we will hear of Jesus calling disciples by name and showing that he knows the needs of their hearts. Jesus will encounter evil face to face and cast it out of people who were thought to be condemned to it. Jesus will heal the sick and care for those who unclean, even forgiving their sins. At last we hear how the disciples began to understand the divinity in Jesus on the mountaintop is directly connected to the mercy and love of God shown in how Jesus was with all kinds of people.

Have you ever noticed that Jesus’ first act in his public ministry is an act of submission and reconciliation? Think about it. We are so used to thinking of Jesus as the continuation of John’s preaching that we forget that at first the two sects were most probably competitors. John came preaching a message of warning; Jesus came preaching good news. John condemned sinners; Jesus forgave them. John lived apart from what he saw as a corrupt society; Jesus lived in it, to the point of eating and drinking in homes of both the powerful and the outcast.

Think of how it might have been: Jesus could have preached against John…pointed out their differences, ridiculed John's funny dress and weird diets all in an attempt to show how Jesus’ way is better than John’s way. But instead of endless rhetorical diatribes against one another, Jesus chooses to submit himself to John. He comes to John and asks to be baptized. Instead of turning John, with his different message and approach, into a competitor, he makes John’s message part and parcel of the good news Jesus brings.

We see this repeated again in our lesson from Acts. Luke tells us in Acts that Paul and Apollos started the congregation in Corinth from a group of followers of John the Baptist. They did it not by beating up on them but by starting where this group was and building on it.

What would the church today look like if we acted the same way? What if faithful people who disagreed with each other on ritual or sexuality or mission strategy chose, instead of fighting with harsh words, schism and legal action, chose instead to see the fundamental faithfulness in each other? What if we saw in each other—and stayed focused on—the deep desire to not only do good but to follow Christ and to make him known? What if we built on our gifts and learned from each other instead of trying to denigrate one another for the sake of deep principle? What if we submitted ourselves to each other the way John the Baptist and Jesus did with each other? What would our common life and our witness look like?

We already know. Actually, more times than not Christians who have vastly different points of view collaborate all the time. I see this among our downtown clergy and among those who share ministry in the local hospital, in the county jail, and who work to feed the hungry and shelter the homeless.

I have previously mentioned to you the observation that Bishop Paul made on Christmas Eve. He said the early Church grew the fastest even before there was an organized church, before they had the Creeds and even before they had a New Testament because Christians were known for their unfailing generosity and mercy especially to those outside the church. They cared for widows and they saved abandoned babies from garbage heaps and cared for the sick even if it meant risking their own lives. Just like Jesus, the earliest Christians shared the Gospel by sharing their lives, by being compassionate to all comers and generous in their mercy.

Given the choice between dueling ads and dueling missiles, I will choose the buses every time, but both events, one trivial and one deadly, point to the same truth. We often reduce reconciliation to the feeling we get when the other guy comes around to our point of view. Or the feeling we get when find people who agree with us. Reconciliation is not a competition to see who will be right first or win more people to my side...especially when we think our side happens to be the same as God’s.

Jesus’ work of reconciliation began with his baptism, and (wouldn't you know it?) our work of reconciliation began with our own baptisms. Jesus didn’t wait until we woke up and “got it” before he accepts us. No, God started where we are, often at our most helpless and builds us from there. For those of us who did have a wake up experience (and God bless you for it) please note that God still met you right where you were…even when you were at your worst.

Good sermon, Andrew! Thanks for sharing it.