The Nano versus The Cyclops 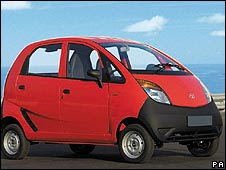 The BBC reports that the Indian car company that bought Jaguar and Land Rover from Ford has come out with the world's cheapest (new) car. It is called the Tata Nano. (Can anyone in America say this without thinking of Mork from Ork?) According to the BBC it will sell for 100,000 rupees or $1,979:

The four-door five-seater car has a 33bhp, 624cc engine at the rear. It has no airbags, air conditioning, radio, or power steering.

With all the news, I had this strange feeling that I have seen this car somewhere before. Then it hit me.

The car that the Nano most reminds me of is this: 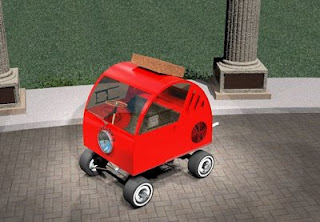 In 1957 Road & Track introduced The Cyclops I. This was the brain child of cartoonist Stan Mott. Why, I don't know but from then on it was treated as a real car. The last known article on R&T about the car was in the year 2000 when it was voted one of the best cars in the century where it came in at 51st place.

The Cyclops was a tongue-in-both-cheeks concoction built in Italy of old Cinzano signs and vaguely similar in shape to today's VW Beetle II (i.e. - a half-cylinder), it had both sides identical and a huge Lucas P-100 headlamp centered in the front. There was no transmission, differential, clutch, or starter, or any other fancy doodads; the single cylinder was mounted vertically at the rear and the conn rod connected directly to a cranked real axle! You just stuck your foot through the floor and pushed back to start it going forwards and v.v. It sat on two fore-and-aft elliptical spring leaves.

As you can see, the Cyclops and the Nano are very similar. Small engine, minimalist design philosophy and funny looking.

What goes around comes around. 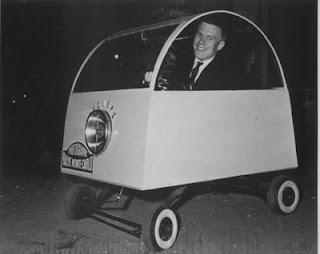 The first model built with the inventor at the wheel.
Posted by Andrew Gerns at 2:26 AM

Email ThisBlogThis!Share to TwitterShare to FacebookShare to Pinterest
Labels: The priest is a car nut