Facing the full force and fury of sin 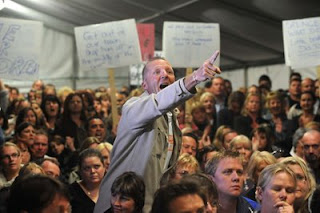 Today we need to blame someone…anyone! The investment bankers! The politicians! The business journalists! Celebrities or sports stars. Sooner or later, someone must take the blame.

When that person or entity is found, apologies must be made. In front of microphones and klieg lights, someone will solemnly will say "Mistakes were made." The person on the hot seat will say (supportive spouse at the side) “If anyone has been injured or offended by words or actions, then I am truly sorry.” Then the punishment begins. It might not be by jury trial or hearing, it may instead be by the media. Rehabilitation may or may not come. But you can be sure of one thing: when the next crisis comes along, blame must be placed.

As I said, it is a ritual. I did not say that it was a ritual that satisfies, but it is what we do. Even when we know it doesn’t work.

Last fall, just before the election, someone put up on YouTube a video. It was an excerpt from a German film depicting Adolf Hitler’s last hours in the bunker underneath Berlin. The clip shows him raving and moving from rage to self-pity, over to self-loathing and then demanding the death of the people he blamed for the failure of his own choices. A frightening performance.

Except that on this YouTube video, some satirist changed the English sub-titles to make it appear that his ranting was because he lost his 401k and his real estate dropped in value.

The satirist was making a point: we will often blame everyone else for both the choices we make and for the things we cannot control. This is actually not very new. It goes all the way back to Jonah. When something goes wrong, someone must be at fault. Someone must atone.

When we scapegoat someone else, what we are doing is changing the subject. We are hoping that people will look more at the other person's failings than our own. It tends to work because none of us can stand up to the fact that all of us are sinful, frail, limited, and self-serving. God made us one way, and we are another way and it far short of what God would have for us. But if we can make someone else take the rap, then maybe no one will notice.

Here is the ironic thing about Jesus’ condemnation and execution. The people made him into just that kind of scapegoat…and he willingly entered into it. It is also ironic that what the people wanted to blame Jesus for and what Jesus was taking on were two entirely different things. People laid on Jesus the symptom. Jesus is addressing the source.

Jesus enters the city on the back of a small, not-quite=full-grown horse. Other Gospels say a donkey…whatever the case, Jesus was not coming in on a mighty steed. He was greeted by throngs of ordinary people as a king, a deliverer. They called him “messiah” but for them this “messiah” would be the one to throw off Roman rule and end religious and class corruption and so restore Israel to greatness.

Jesus became for many a national figure on whom the national and economic hopes of an oppressed and struggling people rested. And when he failed to deliver…when his confrontation with the powers of both and Rome met with resistance, arrest and failure…he become the one they blamed for all their troubles.

The Gospel of Mark goes to great lengths to describe the unfairness of the trial: Mark says that the statements against Jesus did not agree with each other (14:56b); he says that some gave this false testimony against Jesus (14:57b) and but even the false testimony was inconsistent (14:59). Compared to the other Gospels, Mark emphasizes Jesus' silence by telling us "He gave no answer" (14:61), while only Mark has Jesus answer the question, "You, are you the Christ, the son of the Blessed?" with "I am" (14:61-62). He is spit upon, stripped, heckled and beaten all the way to Golgotha, where is executed by slow torture in public. The entire process is meant to reinforce Roman power over the people but also allow people to focus on the sins of executed while they entered the walled city.

So why would Jesus willingly enter into this game? If he knew that people expected him to a liberator when he was preaching peace, faithfulness and repentance, then why didn’t he go the other way? Why would Jesus choose to go into a place where the cards would be so stacked against him?

Because what we blamed him for had nothing to do with what he was doing. Jesus chose this route because while still live in our sin and denial, God is busy reconciling the world to himself.

We cannot fully appreciate what Jesus did and who Jesus is without the cross. Jesus always refers to himself as a “human being,” as “the son of man.” There are only a few times in the whole Gospel of Mark that the phrase “Son of God” appears. In the very beginning of the Gospel, once or twice when a demon blurts it out too soon, and then after he is crucified. When has died on the cross, a centurion watching all this says “"Truly this man was God's Son!" Mark’s Gospel shows us that the only way to really know Jesus is know him crucified.

Jesus goes the way of the cross and so confronts the full weight and force of human sin. No scapegoats. No easy outs. No apologies in front of microphones or tearful admissions of failure. No phony mea culpas. Jesus, the fullness of God and the fullness of humanity, does not skirt sin but walks straight into it.

We walk the way of the cross, as well. Only we follow in Jesus’ footsteps. We follow because now can stare unblinkingly in to the truth of our sin and brokenness, and know that by virtue of the cross and resurrection, because of Jesus’ death to which we are were joined in our baptisms, we can go to the cross and instead of seeing death, we find life.

We walk the way of the cross because for us to know life, to we know the depth of love God has for us and fullness of our rescue from the power of sin, evil and death.

This week we will walk the way of the cross. On Thursday, we will see Jesus serve his disciples one last time and then in agony face the depth, the darkness and power of human sin. On Friday, we will go with him to the cross, where the power of sin will take him to his death. On Saturday, when everything seems dark and absent, we won’t hide, but we will feed the hungry in The Ark Soup Kitchen. And then that night, on Easter Eve, we will wait in darkness and discover in dazzling new light that when Christ is raised from the dead, sin, darkness and evil are defeated once and for all.

Jesus goes to the cross so that the world may be reconciled to God.

And we follow Jesus to the cross for the sake of the world.
Posted by Andrew Gerns at 9:00 AM