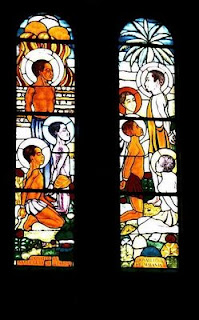 So it appears that the red of Pentecost, in our hangings and lovely flowers has a new meaning. No longer the red of the fire of the Holy Spirit, but now the red of the blood of the martyrs.

Have you ever wondered what it is about martyrs and the Church? What is the attraction?

Martyrdom has a bad name these days.

Sometimes we reduce martyrdom to emotional blackmail, where I might let you how deep your behavior causes me to suffer. And (sigh) I will gladly bear this cross because (double sigh) I love you.

But much more often we hear the word "martyr" associated it with fanatics and terrorists who do horrible and despicable things in the name of their cause, often in the name of God. We hear that the 19 young men who perpetrated the attacks on September 11, 2001 were driven at least in part by the promise of a special place in heaven for holy martyrs. We think of people who for whatever reason, who get on a bus or go to a crowded street and cry out the name of Allah before setting off the bomb they have strapped to themselves.

But this kind of distorted thinking about martyrdom can be found in this country, too. We pray for Dr. Tiller, who was gunned down in his church this past Sunday in Kansas. Maybe he's a martyr? But adding to the tragedy is that it appears that he was gunned down in cold blood by a fellow Christian who would stop at nothing, except his own death, to follow his beliefs.

In the early Church, right after Constantine, some Christians were actually disappointed that the persecution of the Church ended. They would go out and seek martyrdom, often provoking people to kill them thinking that they would inherit that same special place in heaven. They weren't martyrs. They were brigands.

The difference between a fanatic and a terrorist and real Christian martyr is that the fanatic and the terrorist is more than willing for you to die for his faith, while a martyr follows Jesus wherever Jesus leads, even if that means death.

There are signs of a religious terrorists and they are easy to spot: someone who breaks the law for his or her cause and then runs away or hides or fights like mad at being arrested, proclaiming their innocence; or, someone who preaches for others to go their deaths on the preachers behalf. Or someone who uses inflammatory language to stir up passions (and raise money) and then claims innocence when someone acts on their words with deadly consequences. Saying "I condemn their action, but I understand what motivates them" is not condemnation.

This is what gives martyrdom a bad name, and takes away the lesson that true Christian martyrs teach us everyday followers of Jesus Christ.

The martyrs of Uganda did not seek death. What was remarkable about them is that when ordered by their king to stop being Christians, they kept on being Christians. And when he decided to wipe out all the Christians from the royal court (and thus from Uganda), they went to their deaths together, praying, singing and expectant. Were they afraid? I am certain of it. Did they let their fear overwhelm their faith? No.

And it was the witness of the common people who witnessed their deaths (and who were supposed to be frightened into staying away from Christianity) that caused the Church in Uganda to explode and flourish. Needless to say, the Kings plan backfired. Today Uganda is the most Christian of all the nations in Africa and boasts the largest memberships of three traditions: Anglican, Catholic and Lutheran.

In our own history, I am reminded of the Freedom Riders of a century ago and the Student Nonviolent Coordinating Council who worked in the segregated south against government-sanctioned terrorism to assure equal rights for African-Americans. The teaching of SNCC was to disobey the law and then allow oneself to be arrested...because, as Ghandi taught, being arrested for an unjust law highlights the injustice. Choosing to meet injustice with resistence but not giving into violence will, eventually, overwhelm and disempower the violence.

A generation ago, people went south to work for justice at the lunch counter and in the voting booth. They did not seek death. Most came home, changed. But some were killed. Among them Medgar Evans and also Jonathan Daniels, an Episcopal seminarian.

When impatient people, tired of all the killings and the apparent slowness of the pace of progress took over SNCC and took out the "non-violent" from their name, the group lost all their power.

The martyrs of Memphis stayed behind in a city striken with Yellow Fever when every sensible healthy person left to care for the sick and the dying. And the Episcopal and Roman Catholic nuns, lay people and clergy who died during those terrible weeks did not wish for death, but they followed Jesus to care for their neighbor when no one else would.

Following Jesus in this age, and every age for that matter, is demanding and it is costly. Being a friend and apprentice of Jesus Christ changes us, causes us to make choices, even sacrifices, and may even take us to places we are not prepared to go...sometimes even to death. The goal and the glory is not in the death, but in whatever we do and wherever it leads following Christ.

This is why remembering martyrs on the calendar is important for us in our walk with Christ. It is one way that we are reminded and encouraged to keep on keeping on, to daily start a new and to decide to follow Jesus one more day, wherever he may lead.

So this week, when we hear again the stories of the martyrs, we are reminded and encouraged to keep on keeping on. To know that what we do is costly. And that whatever happens, we follow Jesus joyfully.
Posted by Andrew Gerns at 8:40 AM