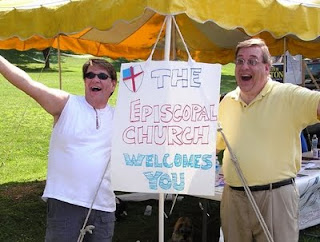 Yesterday, folks from several Lehigh Valley Episcopal Churches staffed a booth at the Pride in the Park festival, the largest gay pride event in Northeast Pennsylvania, including some members of my own parish. I observed a few things which sharing: one is old news that bears repeating and the other indicative of a healthy trend.

But first, here is what the Rev. Scott Allen (at left in the picture), priest in charge at St. Andrew's, Bethlehem who once again organized this years effort, wrote to all of us in a thank you note:

To all the stalwart, faithful and courageous souls
Who to Cedar Beach Park on a Sunday did go
To lend support, a smile and care
To our LGBT sisters and brothers gathered there
While the weather was HOT you performed with grace.
Shaking hands and connecting with every face.
From Mickey who gave the shelter
And with the help of Ken and Jeff, helped us not to swelter
To Michael's graphic creativity
You witnessed with power to inclusivity
Mediator, Andrew, Anne and Nativity
Grace and two who bear the Holy Trinity
Gave witness and with your bodies and made true
"The Episcopal Church Welcomes You!"

Thanks for all your help, words, sweat, dog biscuits, flyers, dog sitting, sun standing, holy cards, banner holding, tape cutting, welcome giving, flyer passing and incarnate love for Jesus this year at Pride In The Park 2009! I am always humbled by your commitment.

Six Episcopal congregations from the Lehigh Valley took part. From my own parish, five people volunteers and several others came by and said "hi". This was very heartwarming to me.

This leads to my first observation, the one that gives me great hope: The Episcopal presence was not the only Christian or even the only religious presence at Pride in the Park. Congregations from the NE PA Synod of the Evangelical Lutheran Church in America was present. I don't know how many, but I did see that our neighbor from Downtown Easton, St. John's Lutheran, was present in a big way. The United Church of Christ was also present in a big way, as well as the Unitarian Universalist Church. Roman Catholics were represented by the Dignity booth (although the local chapter meets in an Episcopal Church). I had a very nice talk with a Mennonite pastor, an MCC pastor and her spouse, and a Baptist minister and his wife. I noticed that a Jewish group was present, too.

Which means that there were many more faithful Christians and people of other faiths present and engaged inside the gates than the handful of mean-spirited and angry religious protesters just outside the gates. I counted about a half-dozen protesters who said some angry, insulting and obnoxious things to me and others in God's name. The group called Silent Witness accompanied people up to the entrance with their rainbow colored golf umbrellas to offer a moving safe space from hate. A ministry of the Metropolitan Community Church in the Lehigh Valley, I realized that there were also many more Silent Witnesses than protesters.

The variety and quality of the religious presence tells me that religious community is being less and less fearful and allergic to being seen with and ministering among GLBT folks. We still have a long, long way to go but the strong positive religious (and Christian) witness on the inside has grown to the point where it has begun to balance if not overshadow the angry, the hateful and the nuts.

A related observation is how profoundly welcome I felt. The members of our parish who have taken part this year and in the past have said the same thing. Not once did anyone chew us out or shun us for the awful treatment gay folk have experienced at the hands of Christians and the Church. More often than not we were thanked for being present.

My other observation is not a new one. In fact, it is a statement of the hugely obvious but it is still worth repeating. It is a lesson that the straight folks in my parish who have little contact with the gay community needed to experience first hand.

I realized as I walked up and down the festival and talked to and stopped by vendors, exhibitors and activities, that I was walking in a living expression of the dreaded "gay agenda" that others have warned me about. If the vendors there were indicative of the "gay agenda" then it consists of things like vinyl siding, heating and plumbing, banking, real estate, pet grooming, life insurance, cars and car repair, recreation and resorts, restaurants and banquet facilities, health care, local politics, and on and on. The so-called "gay agenda" consists of all the everyday stuff of everyday living. Religion included.

Pride in the Park reminded me once again that the "gay agenda" is really rather simple and in no way sinister: to live everyday life, peaceably and with dignity as the person you are with the person you love without someone getting in your face.

Email ThisBlogThis!Share to TwitterShare to FacebookShare to Pinterest
Labels: Being a friend and apprentice of Jesus Christ, Evangelism