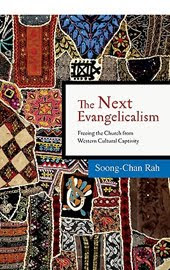 Updated. Last month, on SoJoNet, Edward Gilbreath interviewed Soong-Chan Rah, who says that the church can no longer think of itself as centered on Europe and America, and that if the church is to have any vitality it must begin to think in terms of a true ethnic and cultural diversity.

Gilbreath describes Rah (who is assistant professor of church growth and evangelism at North Park University in Chicago) as someone who "ruffled a lot of feathers over the years by calling attention to issues of racism and cultural insensitivity in the evangelical community." Among other things, he called out Zondervan/Youth Specialties when they published an insensitive and racist vignette in a book of skits for youth groups.

Rah says in his book that the Emergent Church movement as "overhyped" and "lacking diversity." Galbreath observes that "it seems as if Christians involved in that movement are extremely culturally bound, even more so than “mainstream” evangelical Christianity." To which Rah responds:

Any organization can change and adapt if they desire, and if they are willing to pay the price. There is also the importance of self-awareness. I think when there is a new thing that comes up, its advocates should exercise enough self-reflection to say, “We’re saying some really exciting things, but what are the unintended negative consequences of what we are saying? What are our blind spots and the areas that we need to grow in?”

I think even new things like emergents or new monastics can get stuck in a vacuum and not recognize that there are divergent voices that can contribute to the dialogue. I would encourage any new movements to consider and hear from disparate — and even oppositional — voices.

I would look for places of interaction across cultures. Many of us may find these opportunities at our place of work or in our neighborhood — it’s probably our church and Christian world that is more likely to be segregated. I would encourage the building and deepening of healthy cross-cultural relationships in your current context. My recommendation has been to seek out mentors or spiritual leaders from a different ethnic/cultural background. There will be different contexts (single-ethnic churches that are of a different ethnic background from you, or multi-ethnic churches with a diverse staff) where you may be able to find cross-cultural mentors. These relationships should not be forced, but it really needs to have the foundation of a genuine relationship and commitment.

Read the rest of the interview here and here. See Episcopal Cafe here on the same topic.
Posted by Andrew Gerns at 2:30 PM