This train, dont carry no jokers, this train 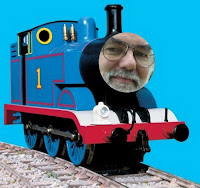 The big news on the Anglican blogosphere this morning is that seven bishops (yet unannounced) have gone to Lambeth Palace to consult with Archbishop Rowan Williams. We don't know why exactly or who they are, but Dan Martins says:

I have no inside knowledge of the subjects under discussion, but it doesn't require any eavesdropping equipment to figure out that they're talking about how Dr Williams' "two tier/two track" plan might actually get implemented. More specifically, it is a safe bet that each of the seven is interested in what steps a diocese might have to take to remain on Tier/Track One even as TEC per se is assigned (consigned?) to Tier/Track Two.

It appears that as long as Rowan is the Yardmaster, there are going to be two trains leaving on two tracks. All he has to do is assemble the trains.

So, the seven American Bishops are going to London to make reservations on the Anglican Express now boarding on Track One. What is the price of a ticket?

It is easy to assume that for an American Bishop who would like to board the Anglican Express, he (or she) must present a ticket showing that they are opposed to the ordination gay or lesbian people as Bishops (if at all).

Here are the affirmations of the Anaheim Statement:

We invite all bishops who share the following commitments to join us in this statement as we seek to find a place in the Church we continue to serve.

* We reaffirm our constituent membership in the Anglican Communion, our communion with the See of Canterbury and our commitment to preserving these relationships.

* We reaffirm our commitment to the doctrine, discipline, and worship of Christ as this church has received them (BCP 526, 538)

* We reaffirm our commitment to the three moratoria requested of us by the instruments of Communion.

* We reaffirm our commitment to the Anglican Communion Covenant process currently underway, with the hope of working toward its implementation across the Communion once a Covenant is completed.

* We reaffirm our commitment to "continue in the apostles' teaching and fellowship" which is foundational to our baptismal covenant, and to be one with the apostles in "interpreting the Gospel" which is essential to our work as bishops of the Church of God.

A little while back, Mark Harris listed the signers of the statement cross referencing those who voted for C056 and D025 as well as those who are apart of the original so-called Communion Partner bishops (in red) and who are retired (italicized).

The Rt. Rev. Geralyn Wolf, Rhode Island is a member of the Communion Partner bishops but apparently did not sign. She was at General Convention.

Mark's post on 7/21/09 is here, which focuses on the Communion Partner Bishops in his analysis.

Nine of the signers of the Anaheim Statement also voted for either D025 or C056 or both. The statement says that they are in favor of continuuing the so-called moratoria and they acknowledge that gay people are part and parcel of our life in the church. Some of these accept that they will not be excluded from the call process, even for Bishops. If dissent to either one of those resolutions is the price to board the Anglican Express, then the voting pattern of a little over one-fourth of the signers is a little puzzling.

It appears that one-fourth of the signers believe that they can remain in full communion and also have some sort of movement, study action or generous pastoral response to ordained, partnered GLBT folks. Is there a car on the Express for these folks?

Those on board the Anglican Express would be bishops (and their dioceses) that see themselves in direct Communion with Canterbury, ignoring the role and place (and governance) of their province. On the Anglican Express, the bishops (and their dioceses) who are in direct communion with the ABC and others on this train, mediated by some kind of Anglican Covenant.

Those who depart Track Two would understand that Anglicanism is comprised of a communion of autonomous churches which may vary in matters of liturgical and pastoral practice, and that the province is the local expression of Anglicanism in their geographical area. On the Local, the bishops (and their dioceses) who are in communion with the ABC and each other through less formal means such as exists now.

Let's put this on a practical level, a level that most everyday parish clergy and many everyday parishioners understand. The Romans don't allow us to receive communion because we are not in Communion with the Pope. And I don't mean the Episcopal Church, I mean you through your Bishop. In Roman Catholic-land, the bishop and the diocese of bishop leads is the direct representative of the Big Guy in Rome.

If, as Rowan says, this is your bishop's vision of what communion ought to look like (except that the Big Guy is in Canterbury not Rome) then please head to the platform for Track One.

If this is your bishop's vision of what communion ought to be, then please proceed to Track Two.

Notice that the way the question is structured in Rowan's reflections after General Convention: he would like the choice to go to the individual bishops not their Primates, councils, synods nor conventions.

So the choice of which train is not yours. It's your Bishops. So first, let's imagine your Bishop has decided that you and your congregation and diocese has boarded the Anglican Express. Now imagine hearing your Bishop announce: I have decided that all of us are going to ignore, avoid and disregard the Episcopal Church, the House of Bishops and the other dioceses of the Episcopal Church. As long as you are in this diocese, you are in communion with the Archbishop of Canterbury through me.

There is official language in some dioceses that sound pretty close to that all ready.

Now imagine your priest standing up and saying "All baptized Christians are welcome to receive Communion as long as they are in full communion with the Archbishop of Canterbury, and we await the healing of the sad divisions between us."

We already have a long history of Episcopalians and other Anglicans who disagree refusing to have communion with one another. It is not much of a leap from there to this scenario.

What's ironic, is that in the US at least the nature of our Communion is allow these Bishops some latitude according to their conscience. But what about a moderate Bishop in, say, Nigeria? Do you think that Peter Akinola will allow a moderate bishop in his province to go to Track Two? I think not.

The more I think about it, the more I think that the Anglican Covenant is a solution desperately in search of a problem. I sure hope there's a bar car on the local.
Posted by Andrew Gerns at 9:15 AM

I don't know about Anglicans but wherever three or four Episcopalians are gathered there is a fifth so we won't need the bar car. Or maybe we will be the bar car. Meanwhile, all the interesting people will be on the local and probably in the bar car. There will be laughter and generosity and much love on the local. I suspect we will have more company on the local than those currently visiting the ABC can imagine. Of course the CoE will be with us as well. 'Twill be interesting.

If dissent to either one of those resolutions is the price to board the Anglican Express, then the voting pattern of a little over one-fourth of the signers is a little puzzling.

I find nothing at all puzzling with someone who voted for either or both of those resolutions to sign this statement. Access to the call process does not guarantee anyone consents.

Consents are a constitutional function given to bishops with jurisdiction and standing committees. The process is not a subject of canon. The non-discrimination canons have nothing at all to do with the consent process.